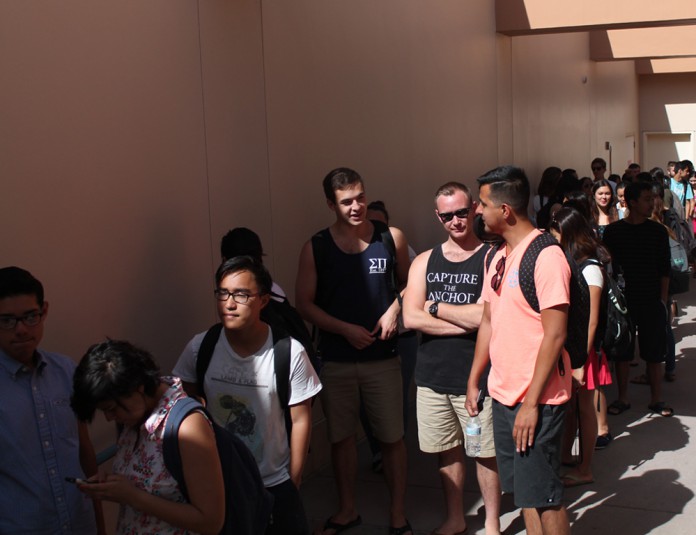 The upcoming comedy, “Neighbors,” is really more like three movies mashed together into one. Directed by Nicholas Stoller, whose past films include the amazing “Forgetting Sarah Marshall,” this advanced screening was presented by Associated Students Program Board on Thursday, May 1, in Isla Vista Theater.

The first facet of the film is about Mac Radner (Seth Rogen) struggling with being an adult–a role that is a mainstay of his career. In what is basically a continuation of “Knocked Up,” Mac has a wife, baby, and an office job. Both he and his wife Kelly, played by Rose Byrne, struggle with the reality of being grown-ups and having to be responsible for the first time in their lives.

The second part is a college frat movie, starring Zac Efron as the stereotypical frat president Teddy Sanders and Dave Franco as his lackey vice president Pete. They take brotherhood very seriously, and frat comes before all else. It’s their last year in college, and thus, it is time to “rage” as hard as possible every night.

The third part encapsulates what happens when these two worlds collide. After the fraternity settles next door, Mac and Kelly want to prove they are cool neighbors. They do their best to withstand the constant parties, but eventually call the police, despite their promise not to, and inadvertently start an all-out prank war.

Rogen does a good job playing what I can only assume is himself as a pothead doing his best to fulfill his minimal responsibilities. He works well with Byrne, who, despite the usual portrayal of gender roles, is not there to calm Mac down, and in fact often escalates his ridiculous behavior. Both seem comfortable in their roles as young parents in over their heads in a ludicrous situation.

Efron plays his role as a stereotype well. Written to be every adult’s imagination of the perfect frat star, he does just that, including spending the majority of his screen time shirtless. His fraternity compatriots include Christopher Mintz-Plasse, who will never live up to his debut role in “Superbad” as McLovin but does a fine job in a limited role here, and Dave Franco, famous for both “21 Jump Street” and being James Franco’s younger brother.

The movie itself bites off a little more than it should have, which leads to some pacing issues. They have to rush through some scenes, a few characters don’t get a chance to establish themselves, and not all of the plot makes sense–but then again comedy plots rarely do.

While some of the jokes are more uncomfortable than funny, namely a breast pumping joke that had half the audience looking away, most of the time “Neighbors” stays within the bounds of what you’d expect from “Project X” meets “Knocked Up.” It’s not quite on par with the Judd Apatow movies Rogen has done in the past, but it’s worth seeing if you’re a fan.

In the end, “Neighbors,” which hits theaters May 9, is a solid comedy with enough pot and yelling to remind you what Seth Rogen is all about. Throw in a plethora of dick jokes, party scenes, a ton of shirtless Zac Efron, and girl on girl action, and everyone is happy.