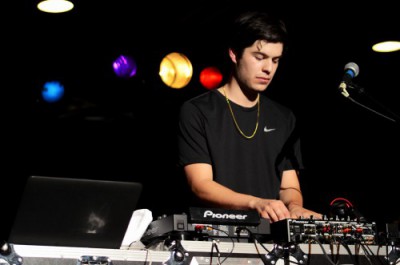 Many electronic musicians find it difficult to set themselves apart from the throng of producers and DJs that have emerged during this era of user-friendly production software and music sharing websites. However, Shlohmo has been making waves in the music industry since 2009 via his unique brand of lethargic electronica. And on Wednesday, May 21, courtesy of Associated Students Program Board, Shlohmo skillfully displayed his talents to audience members at University of California, Santa Barbara’s The Hub.

The doors to The Hub opened at 8 p.m., and the music began promptly thereafter. Unfortunately, I was not able to arrive until after Nick Melons’s opening set. By the time I had passed the security check and entered the venue, Groundislava had already begun his performance.

Groundislava played a mix of experimental house music that drew heavily from the electronic beat culture of Los Angeles, closing out with his track “Cool Party.” His up-tempo beats harmonized with his own enthusiasm for the music, which he demonstrated by bouncing back and forth and bobbing his head to the melodies that he conjured.

Like Nick Melons and Shlohmo, Groundislava is a member of WeDidIt, a collective of LA-based producers and visual artists whose members and affiliates include RL Grime, D33J, Ryan Hemsworth, and more.

The WeDidIt collective has been heavily influenced by the Los Angeles beat culture–dubbed the “LA beat scene”–since its foundation. Since then, they have also contributed back to the scene.

Like many other young artists from LA, WeDidIt’s members embrace the Low End Theory in Lincoln Heights as their Mecca, with brain feeder pioneers like Flying Lotus as their prophets. According to an interview with XLR8R in July of 2010, Shlohmo stated he had researched the Low End Theory before attending one of their events and had thought, “Damn, this place sounds like the sh*t. I’ma be there every Wednesday for the rest of my life.”

However, Shlohmo has progressed greatly as an artist since his days as a youth in LA, and was the star of this past show–coincidentally also held on a Wednesday.

Unlike many of his DJ sets–which he often floods with slowed-down hip-hop tracks at a lowered pitch to create a sluggish effect that sounds like the audible manifestation of a cup full of codeine–Shlohmo stuck to a set of strictly original music and his remixes.

He first played a string of his original compositions, mainly pulling tracks from his 2013 EP “Laid Out” and the 2012 EP “Vacation.”

From these EPs, Shlohmo chose tracks that prominently featured his signature use of wordless vocals (see “Later” from “Laid Out” EP”). The reverberated moans and cries of these songs added a fantastically eerie quality to his set. Coupled with his songs’ ringing hi-hats and persistent bass, Shlohmo’s performance was made to sound as if the crowd was experiencing a beautiful death, appropriately matching the tombstone with a smiling face that WeDidIt has adopted as their logo.

Following his original work, Shlohmo played a flurry of his remixes. He first played his version of “Changes” by the now defunct LOL Boys, which he seamlessly fused into his remix of Young Scooter’s “Colombia.”

Shlohmo then played his remix of “F*ck You All The Time” by R&B crooner Jeremih. Maintaining the R&B sentiment, he then transitioned into “No More,” the first song from his upcoming EP with Jeremih, which was scheduled to be released by Def Jam Records earlier this year but has been postponed due to “Major label bullsh*t,” as Shlohmo stated on his Twitter account earlier this month.

To end the night, Shlohmo played his remix of Electric Guest’s “Bait,” followed by a slew of presumably unreleased material, which he prefaced by stating, “Y’all wanna hear some new sh*t?”

Shlohmo ended emphatically with an unreleased collaboration with Jeremih from their upcoming EP before thanking the audience for their support and walking off into the darkness of the backstage area.

The audience seemed visibly pleased with Shlohmo’s performance as the lights turned on and the venue’s security had to begin ushering crowd members toward the exit. It’s safe to say that Shlohmo and his friends at WeDidIt will find another packed room of eager fans awaiting them if they return to Santa Barbara in the future.