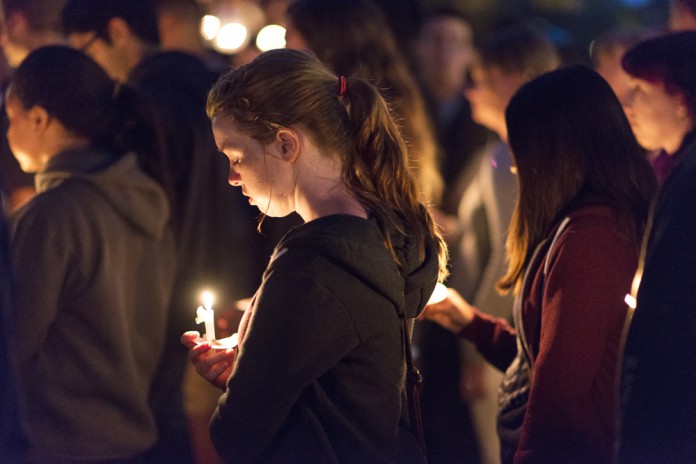 In the wake of the Isla Vista killing spree, which claimed the lives of six victims and injured 13 others, local students, residents, and officials have all come together with fellowship and support, mutually declaring the concord and preservation of the community. Heartfelt dedications, such as shrines of flowers, candles, and photographs, have cropped up at various crime scenes: in front of IV Deli Mart, at the top of the loop on Embarcadero Del Norte, in front of the Capri Apartments on Seville Road, and at the site of the deaths of Katie Cooper and Veronika Weiss.

“We’re here to stand in solidarity as the Isla Vista community and mourn together,” said University of California, Santa Barbara alum Marjan Riazi at the Candlelight Vigil on Saturday, May 24. “Please respect each other and remember that everyone is processing this experience in their own way… We’re all here together. We’re all here for each other.”

The Candlelight Vigil, which began at UCSB’s Storke Plaza, reflected the sense of community togetherness that has permeated Isla Vista since the tragic events of May 23. The vigil, which was organized by a group of concerned students, Associated Students executives, and UCSB administrators, included no talk of the killer—only a forthright commitment to the reparation of Isla Vista and a remembrance of the victims.

A vast sea of heavyhearted students, community members, and UCSB faculty filled the entirety of Storke Plaza, from the stairwells down to the arches and around the koi pond. Within the thousands-strong crowd, many could be seen crying, and most were holding candles distributed by the event organizers. Local political leaders, such as United States Representative Lois Capps and Santa Barbara City Council member Cathy Murillo, were also present at the memorial.

Riazi and fellow alum Ryan Yamamoto began by speaking to the students, reinforcing that Counseling Services were available to any student that needed them. After a moment of silence, members of various campus acappella groups came together to give a touching elegiac rendition of “Amazing Grace.”

The vigil then began its resolute march out of campus down Pardall Road and around the IV Loop, tramping over the killer’s path of violence to their final destination at the Anisq’Oyo’ Park amphitheater.

“In the face of everything, this is beautiful. So thank you,” said Yamamoto, the first speaker to address the crowd. Inviting anyone to the stage to express his or her emotions, he continued, “This is our moment for healing. We all stand here, we all sit here as a school, as a community.”

UCSB Chancellor Henry Yang came up next, speaking with a tremulous tone in his voice.

“We grieve for the loss of such precious life so early,” he continued. “We honor the memory of those who were so suddenly and terribly taken from us. We are moved by the compassion and the courage we have witnessed over the last 24 hours.”

Chancellor Yang also took note of the widespread aid Isla Vista had received in its time of need. UC President Janet Napolitano pledged the support of the University of California system, he said, while also indicating that additional counselors would be visiting UCSB to provide further assistance.

Multiple students took the opportunity to speak at the vigil, extolling the unity and sympathetic message of the aggrieved Isla Vista community.

Loree Lewis, a fourth-year UCSB student, related through tears, “I want to tell all of you: Isla Vista is my first love.”

“The saddest part of all of this to me is that I don’t know all of the individuals that were injured last night, or that are still injured, or that were lost,” Lewis said. “I know that at least one of them taught this to me. They taught me to understand and to be compassionate and to understand a different point of view and that this misconception is continuously construed that there’s a lack of love between all of us… I know that you are loving; you’ve showed it to me.”

Richard Martinez, the father of IV Deli Mart victim Christopher Ross Michael-Martinez, spoke to reporters at the May 24 press conference, tearfully articulating that he had spoken to his only son on the phone just 45 minutes before he died.

“It’s just insane,” he said, bashing both politicians and the NRA for their stances on the availability of firearms. “How can this go on? What are we thinking?… What about my son’s right and all these other kids to live a life without being shot?”

Martinez also noted the spectacular academic record of his son, who, after planning to study abroad next year in London, was considering an early graduation and a career in law.

“Everybody thinks it won’t happen to their family, and then it does,” he said. “None of us, I don’t care who you are, are immune from this.”

The police response to the shooting has been widely lauded for its staunch confrontation of the suspect, its prompt response time, and the prevention of further injury. Sheriff Brown commended the “resolute actions and valor” of those in his department, while also offering consolation to the victim’s families and a commitment to the continuing investigation.

“I also want to let the families of the victims know that our hearts go out to them at this tragic time,” he said. “We will be doing all that we can in the near future to try to identify the actual circumstances and the complete background information and so forth about this horrific series of events that occurred this evening.”

Facebook has become a hotbed of expression for students memorializing the victims, speaking out on senseless violence, and condemning the killer’s ideology. Groups in remembrance of the aforementioned victims, as well as for Cheng Yuan Hong, George Chen, and Weihan Wang, have garnered thousands of likes.

The Twitter hashtag #YesAllWomen has also been trending, reflecting a widespread condemnation of the misogynistic rhetoric peddled by the killer.

But community voices were not the only responses to the tragedy. A media onslaught has descended on Isla Vista, filling the town to the brim with reporters, photographers, and media vans from all across the country. Multiple stations have conducted live television reports from the sites of the various crime scenes, such as IV Deli Mart and the gated area outsides the killer’s residence.

As the weekend passed after the shooting, symbolic objections were developing to the often-intrusive presence of news outlets.

One UCSB second-year, wearing a black bandana and glasses over his face, silently held a red poster that read, “NEWS CREWS, OUT NOW!” at the focal points of the media coverage.

“I’m not trying to get recognition for doing this,” he said in regard to his choice to remain anonymous. “We just need to recognize the problem.”

He explained his opposition to all the coverage.

“One contributing factor that drives murderers to pull off these situations is all of the recognition that they know they’re going to get afterwards,” he said. “So, I would feel guilty if I didn’t hold this sign.”

Isla Vista is in a state of recovery, and it will remain this way long after the reporters have vacated the community. The response to the tragic shootings has shattered Isla Vista’s reputation as a callous party haven, instead of confirming its core values of togetherness, bravery, and camaraderie. Like the many candles burning at the nighttime vigil, it is apparent that strength and compassion of Isla Vista cannot be extinguished.