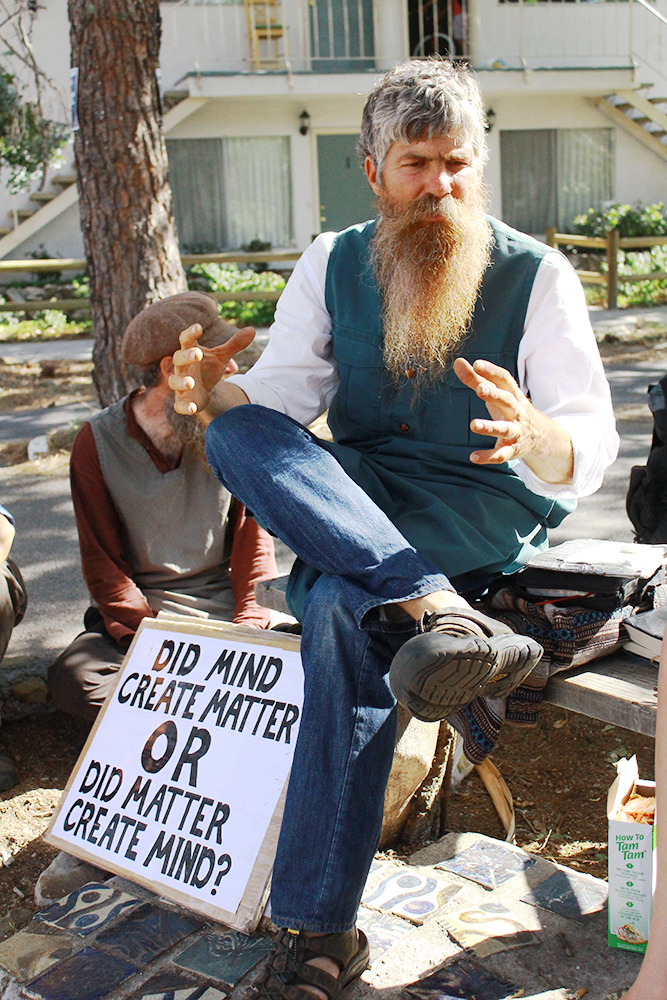 It is a common misconception that people of faith are constantly shoving religion down the throats of the secular youth. Though several of the visitors at the University of California, Santa Barbara try to combat our liberal ways with strict (and sometimes obnoxious) teachings, a new group takes a different approach to encouraging the California culture to take on a Christian lifestyle. In the recent case of the perceived existentialists seen in Isla Vista and on the UCSB campus, religion is more than a message to shout at passersby.

When I sought this group, I found them seated on a bench under the shade of a tree, the sun
shining down in front of them and providing the illusion of a light at the end of Pardall tunnel. The group reached Santa Barbara this past January after traveling from Kentucky to Oregon via the trans-American bike route. Their goal? To try to live the way Jesus’ disciples did, by carrying everything they own and serving God along the way.

A refreshing and unique trait of this group–distinguishing them from other religious peoples preaching on the UCSB campus–is their modesty. While some groups resort to yelling as a method of persuading students to listen to them, these folks are more reserved in their Biblical teachings. They hold handwritten signs asking thought-provoking questions–such as “Is logical thought possible?” and “Is anything really right or wrong?”–which provide little to no indication of their faith.

I spoke with three men, all of whom have been traveling together for almost two decades. One, in
particular, stood out as the leader of the group. Formerly named Jerry Williams, Hatzair has been living this way since 1979. He adopted a biblical name, as most in this lifestyle do, and began traveling the U.S. with other followers of Jesus.

Upon leaving home for college, many students are preoccupied with being away from their families for months at a time. But when Hatzair left home at the age of 17, his focus was not on how difficult it would be, but rather how much of a difference it would make in his life.

“I don’t know how to fix [the world’s problems], but I don’t want to contribute to it,” said Hatzair. “The first step was to get off the conveyor belt, so I did.”

As a Christian, Hatzair believes that it is imperative for people to have a living relationship with God through Christ, and in doing so we will be able to live freely and fully. But rooted in his religious ideology is a philosophy that many members of the UCSB community fail to recognize: live simply. In Hatzair’s eyes, we are too focused on living materialistically and we are corrupting ourselves in the process–destroying our health, our planet, and our lives–and exploiting luxury at the expense of the world. This minimalist attitude may be adopted regardless of one’s religious ideology.

Years later, in 1995, Hatzair met Micaiah, a young entrepreneur who was tired of the materialistic life he had been living. Micaiah sold his two businesses for low prices, declaring that the “high life didn’t seem to be what it was really about.”

“The wealth of this world couldn’t give me what it is now,” he said. “I am learning how to be a servant, when before I was a ruler.”

“I was into raves and trying to find the meaning of life… I met some of these travelers on the streets, and we connected really well,” said Kishiah, who has been traveling with Micaiah and Hatzair for 16 years.

While Hatzair, Micaiah, and Kishiah constantly address the corruption of society (particularly in the West), they make an effort to reiterate the importance of trying to make a difference. On Friday nights, they often mingle with the students at Jesus Burgers, a non-profit Christian group that gives free burgers to the patrons of IV. Recently, Hatzair gave a guest lecture for a public speaking class at the College of Creative Studies. Additionally, the men are always willing to help students with bike trouble; many of UCSB’s bike owners have come to Hatzair and his brothers for their bike repair needs.

On Thursday, May 8, the group will be hosting a “free bike fixer-upper,” in which they will be dedicating the entire day to repairing students’ bikes and “spreading Christ’s love.” The three men are currently camping several miles outside the city, though they are unsure of how long they will be staying here and are currently praying about where their next journey will lead them. Hatzair, Micaiah, and Kishiah are all very approachable, so take advantage of their kindness while they are still here; they are eager to speak with anyone who will listen.