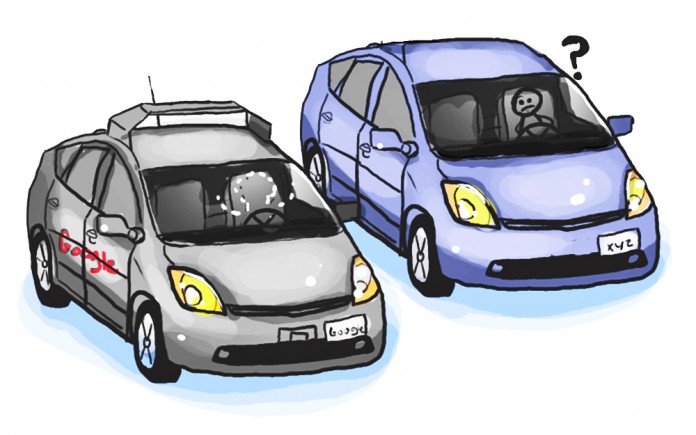 Google is at it again. One of their current projects is making headway on the effort to develop technology for autonomous cars. The driverless car is one of their newer undertakings, with Stanford University professor and engineer Sebastian Thrun leading a group of 15 engineers.

The basis of the technology lies in a Velodyne 64-beam laser that generates a three-dimensional map of the car’s surroundings, which then combines with other detailed maps of the world, according to IEEE Spectrum. Numerous test drives have already taken place around Google headquarters, San Francisco, Lake Tahoe, and other places around the Bay Area.

There have been relatively few incidents involving the self-driving cars, and even those that did occur were at the fault of people operating the car. This cutting-edge technology raises several questions and concerns—legality and safety are hot topics of controversy right now—while also opening the door to previously unattainable possibilities.

A main priority so far has been adaptability to different environments. The car’s technology allows for detection of any relevant object or stimulus relevant to the drive, such as signs on the road, pedestrians and cyclists, and other cars. This has been an area of huge improvement over the last two years, and employees have been sent out in the cars to record any situation that a driver could face, normal or not. The engineers are then faced with the challenge of programming an automatic acceptable response. There have been thousands of miles logged already on test drives.

“With every passing mile we’re growing more optimistic that we’re heading toward an achievable goal—a vehicle that operates fully without human intervention,” said Chris Urmson, one of the head engineers on the project, on his blog.

Just recently, the milestone of 700,000 accident-free miles was reached, and there are notions that these “robot cars” may be even safer than “manual” ones. The technology is designed to follow every law to a T—and when was the last time you did that for an entire car ride? For example, when the laser identifies a cyclist making a hand signal, the car slows immediately, no matter how obscure the sign. However, this also offers opportunity for abuse—if something should happen to that laser, on accident or by purposeful sabotage, lives could be at risk. Google does not give many specific details in their report, but it has already circulated how easy it would be to blind the detectors.

Nevada, California, Florida, and Michigan are the only states allowing the operation of these self-driving cars. Naturally, Google is lobbying for more of these laws to pass (Texas is considering a proposed law as well). There have not been any announcements made regarding commercialization of the car or the technology behind it. There seems to be a lot of administrative red tape—an attorney for the California Department of Motor Vehicles stated that “the technology is ahead of the law in many areas” and points out that all present laws assume a person is behind the wheel of all cars.

A manager of the project, Anthony Lavandowsky, stated in 2013 that the autonomous car will hopefully be deployed in 2018. For now, bits and pieces of the advanced technology involved is being implemented already, such as adaptive cruise control and lane keep assist. These are the stepping stones to what is being called one of the biggest breakthroughs of our time, calling for a revolution in the way we view transportation and the legalities surrounding it, “some of which dates back to the era of horse-drawn carriages,” according to the DMV.