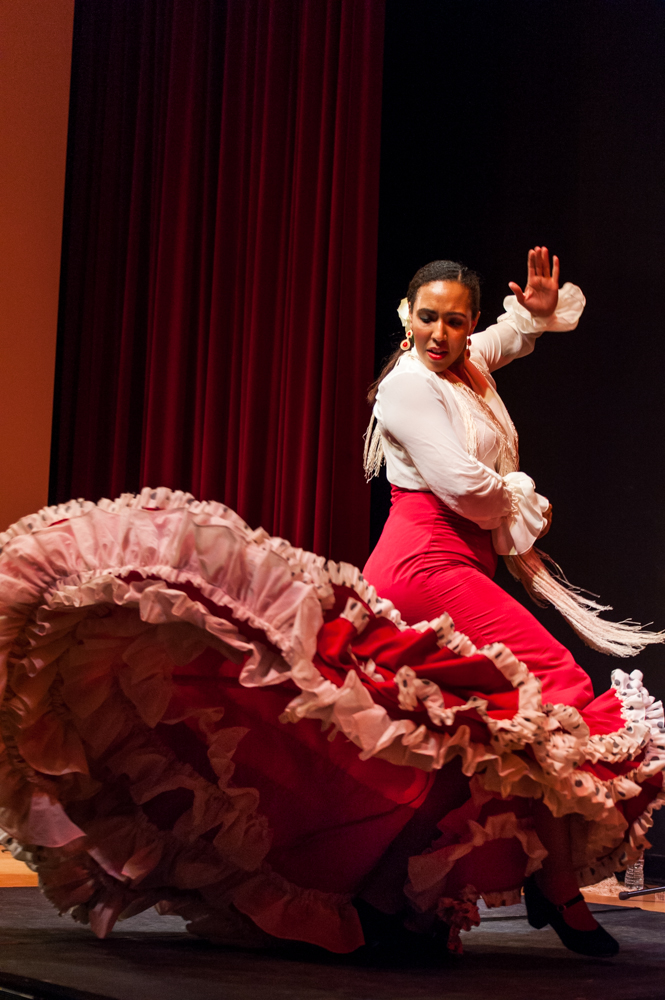 Briseyda Zárate Flamenco Company performed at the MultiCultural Center Theater on Friday, May 16, in an event sponsored by the University of California, Santa Barbara Education Abroad Program and the Flamenco Arts Festival. The company musicians and dancers put on an exhilarating sold out performance in one of MCC’s final events of the year.

Flamenco is a traditional style of Spanish folk music and dance, dating back to as early as the 1770s, and is still popular today all over the world. The main components of flamenco expression are the flamenco toque (guitar), cante (song), cajon (percussion), and baile (dance)–and the dance company brought them all.

They began with a slow song and sensual dance, picking up speed along the way; Zárate and Lourant took to center stage and oriented the audience to the passionate rhythm and movement of flamenco. The flamenco baile is known for its intensity and expressive use of arms, snapping, and hand clapping (known as palmas). In one dance, the intensity was clearly evident in Zárate’s facial expressions as she danced in a white dress while rhythmically stomping her feet to the music. In the same dance, Zárate fused elements of other cultural influences when her tap dancing began to slightly resemble the Irish Riverdance. Her versatility and impressive choreography demonstrates an incredible level of skill that only comes with years of experience and commitment.

The dresses themselves are a major element of the dance. Dancers often hold the ends of their dress up as they dance, giving the audience a good view of their impressive footwork. In certain instances, flamenco dancers resemble blooming flowers as they twirl. Later on, Zárate changed into a bold red dress that greatly resembled the large bright red carnation she held in her hand. Zárate also emulated a Spanish bullfighter as she twirled while holding her dress.

The musicians provided great musical accompaniment, and all members of the company supported the dancers by playing and clapping along, sometimes cheering the dancer or musician on as they performed.

Montoya’s heartfelt voice radiated throughout the intimate theater, becoming more passionate as the night went on, and at times, he held his hand up to his heart. Montoya’s enthusiasm was also very infectious as he yelled out “guapisima!” (“very lovely” in Spanish) as the dancers performed. Morales’s expert drumming complimented the dancers’ rhythm as they stomped in sync with the drums. His use of the cajón, a hollowed out wooden box used my flamenco percussionists, also added some great depth to the music and dancing.

One of the truly exceptional musical talents was guitarist Gabriel Osuna, whose unbelievably fast arpeggios in one dance-less song were just that–unbelievable. Human eyes could not keep up with the rapid movement of his hands, and the sound he produced was simply mesmerizing.

The performance culminated with a friendly dance battle between Zárate and Lourant, each one clapping and cheering the other one on. “Ya todo acabo” (“It’s all over” in Spanish), sang Montoya as the show was coming to an end. With a final “Ole!”, the quintet’s final bows were met with a much deserved standing ovation.

“An Evening of Flamenco Music and Dance with Briseyda Zárate Flamenco Company” is the MultiCultural Center’s final concert of the year. There are two film screenings and one lecture left until the end of the season. “TransVisible” will be screened on May 21 and “Narco Cultura” on May 28 in the MCC Theater. A lecture on race and the U.S. prison system with Professor Kelly Lytle Hernandez from UC Los Angeles’s Department of History will take place on May 20.