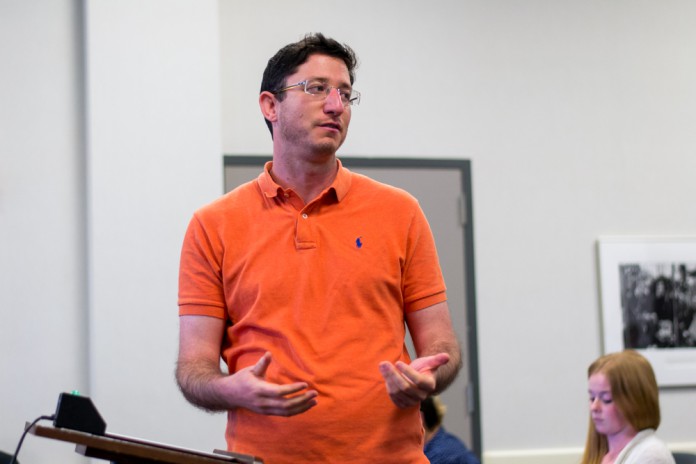 Associated Students Senate approved the 2014-2015 AS budget and discussed a list of demands put forth by various AS boards, committees, and commissions (BCCs) at its meeting on Wednesday, May 7.

Co-chair of the AS Student Commission on Racial Equality (SCORE) Hani Tajsar read a letter, signed by the chairs and commissioners of nine different BCCs, to the Senate during that evening’s public forum. The letter cited several demands, including the rescindment of the recently passed AS restructure bills, the delegation of more decision-making power to BCCs, and budgetary revisions that would give BCCs the ability to approve staff salaries and remove a recharge increase that allocates a portion of these BCCs’ lock-in fees to the recently established AS Pardall Center.

“Despite the presence of Senate Liaisons in every BCC, Senate has continuously showed no real effort to understand, respect, and support how the BCCs function,” the letter reads. “This highlights the lack of decision making power BCCs have in relation to their own autonomy as well as the extreme lack of respect exhibited by the Executive and Legislative branches towards the BCCs.”

Tajsar said that decisions such as the recent passing of the AS restructure are representative of elected officials’ disregard for BCC opinions, as many were opposed to the implementation of the restructure altogether.

“I don’t think that the sentiment that BCCs put out [about the restructure] was fully expressed on the Senate floor,” Tajsar said. “As of right now, the problem is it doesn’t matter what the BCCs say. And that’s been evident.”

The recharge on certain groups’ lock-in fees will increase under the presidential budget from three percent to three and a half percent in order to fund the recently opened Pardall Center. This increase was a primary source of contention for BCCs such as AS Program Board and KCSB, who both had representatives speak against it at public forum.

Program Board Commissioner Amalia Gudino and Special Events Coordinator Aditya Sharma proposed their own alternate budget to the Senate, with various reallocations that they felt could fund the center without the recharge increase.

“We weren’t even brought into the negotiations of the terms, so… there’s no reason for BCCs to be charged for the operating costs of something that we don’t even use, that we weren’t even consulted [on], that we had no sort of say in, and now [is] getting taken out of our budget,” Gudino said.

During his report, AS President Jonathan Abboud said that though he has never supported the creation of the Pardall Center, he found the increased recharge to be the most practical way to fund it.

“It’s not my fault that [former President Sophia Armen] and [former External Vice President of Local Affairs Rhandy Siordia] dumped this burden on me,” Abboud said. “They basically set this whole thing up without figuring out a way to pay for it. That’s what fiscal irresponsibility is.”

Abboud also responded to the BCCs’ demand calling for increased authority on the allocation of staff salaries.

“In terms of staff salaries, the people who are upset and complaining—the students and the BCCs who signed that letter—frankly aren’t qualified to comment on staff salaries,” Abboud said.

Collegiate Sen. and President-elect Ali Guthy agreed with Abboud’s sentiments in her response to the BCCs’ demand for increased decision-making power.

“I don’t think we should vest decision-making power in appointed positions [over those] who were elected by the student body,” Guthy said. “I think it’s extremely undemocratic.”

Guthy also said that though she respects the individual functions of the BCCs, she feels it is important to establish unity within AS as a whole.

“Autonomy [of the BCCs] is on a daily level, and unity is on a more macro level,” Guthy said.

Many BCC members feel this autonomy has been threatened by the organization-wide restructure that will be fully implemented by next school year. Co-chair of Take Back the Night Tara Atrian specifically objects to the presidential appointment of BCC chairs and commissioners.

“Take Back the Night is specifically affected by these changes because it makes our appointment process and our meeting process especially difficult and contentious,” she said. “As an organization that serves as a voice and a healing space for survivors, we have to make sure that the people involved in our organization are understanding of survivor issues and supportive of survivors.”

Humyn Rights Board chair Anisha Ahuja also disagrees with the terms of the recently passed restructure.

“These are UCSB funded [organizations] that provide spaces for students of color, queer students, survivors, workers, and active students that are losing their autonomy to bureaucratic power plays,” she said.

Environmental Affairs Board (EAB) co-chair Kai Wilmsen also expressed concerns that student fees, when allocated to projects such as the Pardall Center, are not being used in a manner the student body would approve of.

“[I] would like to make sure our lock-in fees aren’t touched by other branches of AS,” Wilmsen said. “Our fees were voted on by the student to be used for, in EAB’s case, sustainability projects and other issues surrounding environmentalism.”

During discussion of the AS budget, Off-Campus Sen. Andre Theus addressed some of the BCC concerns as well.

“I do agree with people who came in public forum and talked about our Senate liaison-ship [in] that a lot of us are not doing our job duties fully,” Theus said.

Theus also referenced the unallocated fund provided by the AS budget for requests made by student groups throughout the academic year, noting that it could be beneficial for BCCs to scrutinize the use of their budgets and reduce their reliance on this fund in the future.

“Essentially, if BCCs don’t think that they can put on as many costly events or costly conferences, then maybe they should look at their own legal code and think of what… they want to prioritize that can affect students on this campus now, and maybe dwindle down some of the things that are in their code,” Theus said.

Ultimately, the presidential budget passed 11-7 with the stipulation that $3,000 be reallocated from the Senate unallocated fund to technical support, upon recommendation from Abboud.

Other legislation passed that evening included “A Resolution in Support of Internet Neutrality,” which establishes a stance against proposed Federal Communications Commission (FCC) regulations that would allow Internet service providers to charge content providers different rates for different speeds of data delivery.