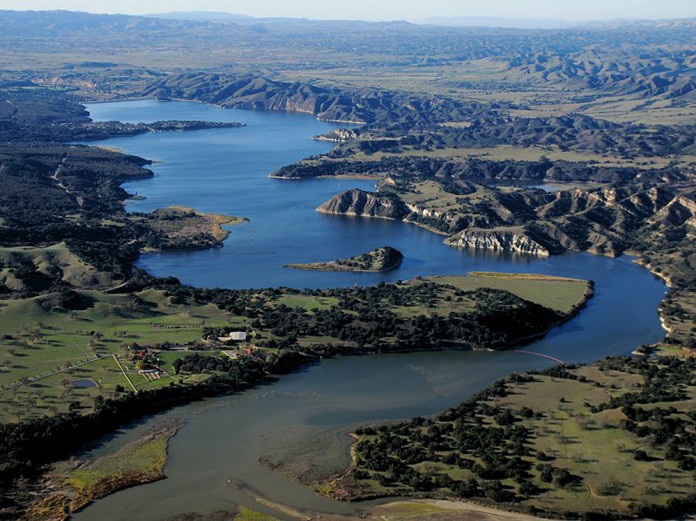 Lake Cachuma, an artificial lake located in the Santa Ynez Valley of central Santa Barbara County, is sitting at approximately 38 percent. These levels are especially alarming because of the approaching summer, when there is less of a chance of rain to refill the lake.

According to the Santa Maria Sun, there hasn’t been enough rain to recharge the reservoir in three years. The level of water in the lake is low enough that the Cachuma Operations and Maintenance Board is in the process of installing a pumping system to obtain water for Southern Santa Barbara County and maintain local wildlife. At risk is the now-endangered Central California coastal steelhead, which in times of drought has difficulty making the journey to spawn through the creek system fed by Lake Cachuma.

According to an article in Mission and State, Carpinteria, Goleta, Montecito, and Santa Barbara all rely heavily on Lake Cachuma. These districts have asked their customers to voluntarily cut back water use by at least 20 percent.

In addition to affecting Santa Barbara water consumers, the drought and its lowering of the levels of Lake Cachuma have also had an impact on the University of California, Santa Barbara Rowing. Nate Clark, president of the team and a third-year English major, is extremely concerned.

“The water level of the lake is dropping, which is giving us less space to practice and making the lake more treacherous due to the uneven, ever changing shoreline,” said Clark.

Clark has noticed a marked decrease in the water level of Lake Cachuma since he has been on the team.

“My freshman year, in the early spring of 2011, we got record rainfall and Cachuma went well over capacity…that season it seemed as though the lake went on and on,” said Clark. “Now, since the water level has dropped around 50+ feet, our walk to the dock is around a quarter of a mile. The change in water levels is dramatic to say the least. I know that the contrast between my freshman year and this year really puts into perspective just how serious the current drought we’re facing is.”

Clark recalled an incident last year that demonstrated the gravity of water level situation at the lake. One of the novice men’s boats was practicing and was scraped by some hidden rocks that punctured the shell and totaled the boat. Clark remembers that the area never used to be so shallow.

“We had to dig deep in our pockets immediately just to continue getting everyone out onto the water which, for a program that already has a want for equipment, was difficult,” said Clark. “The rocks that it crashed into now are a peninsula sticking around 20 feet above the water and cutting somewhere around 100 feet into the middle of the lake.”

According to State Sen. Hannah-Beth Jackson, the drought’s impact may have implications beyond the local. Jackson forecasts that the drought in California may have a potential increase in food prices throughout the country.

“We’re now in crisis management but we have to start thinking in the longer term,” Jackson said at a recent gathering at Lake Cachuma to talk about the drought’s impact. “That’s where the whole water policy issue becomes the challenge.”