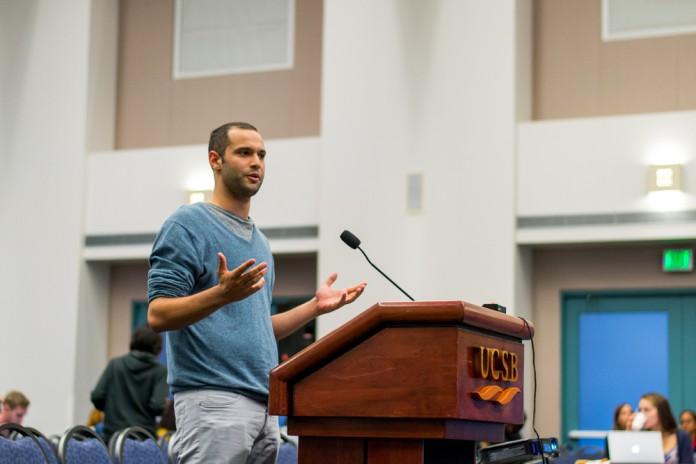 Associated Students Senate faced its most publicly contended issue this year in “A Resolution to Divest from Companies that Profit from Apartheid,” which failed to pass 8-16 at the AS Senate’s Wednesday, April 23, meeting.

The resolution, put forth by student authors Katlen Abu Ata and Hani Tajsar as well as senator authors Scott O’Halloran and Ansel Lundberg, would have called for the Associated Students of the University of California, Santa Barbara (ASUCSB) to direct the UC Regents to dis-invest from any companies deemed complicit in the Israeli military occupation of Palestine. Such companies include Raytheon, Caterpillar, Hewlett-Packard, General Electric, and Northrop Grumman, in which the UC currently has holdings amounting to around $3 million, according to the resolution’s authors.

Advocates and opponents of the resolution gathered in Corwin Pavilion to participate in that evening’s public forum, which was restricted to those who signed up to speak before 8 p.m. Nevertheless, 71 speakers made the list before the cut-off, and eight more late sign-ups were permitted to speak after the initial list was exhausted.

Many opponents of divestment felt that the resolution would be a divisive force in the student body without making substantial progress toward peace in the region in question. Rabbi Evan Goodman of Santa Barbara Hillel, who works with several UCSB student groups, cautioned against such consequences.

“I want a campus climate that is positive and is conducive to dialogue,” Goodman said. “Will [this resolution] bring peace this much closer [between] Israelis and Palestinians? No, it won’t. Will it make our campus this much more of a place where people can get along, engage in dialogue, and have a civil climate? No, this one-sided resolution will not.”

Others opposed the resolution on the grounds that the Israeli government puts militant measures into place for security purposes, in response to terrorist attacks by Palestinian groups. Fourth-year economics and accounting major Elad Menna spoke to the Senate of his experience growing up in Israel.

“As an eight-year-old, I remember watching the news as they reported on attacks such as a suicide bombing at a nightclub… such events constituted a daily reality [for] Israelis,” Menna said.

Andrew Farkash, a member of the Jewish Voice for Peace at UCSB, recounted his grandfather’s survival of Auschwitz, a Nazi concentration camp during Word War II, which he cited as part of his family’s long Jewish heritage. He said that after educating himself in recent years about the history of Palestinian occupation, he has come to stand against it.

Second-year sociology major Mohsin Mirza also spoke in favor of the resolution, suggesting that Israel’s security-based justifications may not be valid.

“There’s this ridiculous notion that human rights violations are not happening,” Mirza said. “Even after Israeli officials, like the senior advisor to [former] Prime Minister Ehud Olmert, admits that Gaza has been blockaded in ‘economic warfare against these people,’ people still deny that these things are happening.”

Abu Ata responded to recommendations of alternate solutions by reminding opponents of the human rights violations the resolution sought to address.

At around 1 a.m., Senate ended public forum to continue with the orders of the day. When it came time to discuss the resolution, senators offered a variety of perspectives.

Several senators felt that the terms of the resolution conveyed a one-sided view of the situation.

“I am incredibly uncomfortable with having a resolution that explicitly targets a very large part of our community,” said off-campus Sen. Derek Wakefield.

Collegiate Sen. and current President-elect Ali Guthy suggested that if ASUCSB were to take an ethical stance on such an issue, divestment should target other causes in addition to the one at hand.

Collegiate Sen. Lupe Zelada took a favorable stance on the resolution, interpreting the university’s stance on the conflict in a different way than Guthy had.

“As it stands now, we are actively funding a violation of human rights and taking a stance on this issue,” Zelada said. “We, as a Senate, are not equipped to begin to try and solve century-long conflicts, but to represent and defend human rights and human life. In what way does our investment in these companies achieve this?”

The resolution failed after an 8-16 secret ballot vote. The Senate also voted on “A Bill to Officially Withdraw ASUCSB membership from the United States Student Association,” which had been tabled a week earlier, and it failed to pass as well.

“A Resolution to Create and Encourage Transparency and Socially Responsible Investing at UCSB and the University of California,” also authored by O’Halloran and Lundberg, was tabled and will be discussed at the Senate’s April 30 meeting.