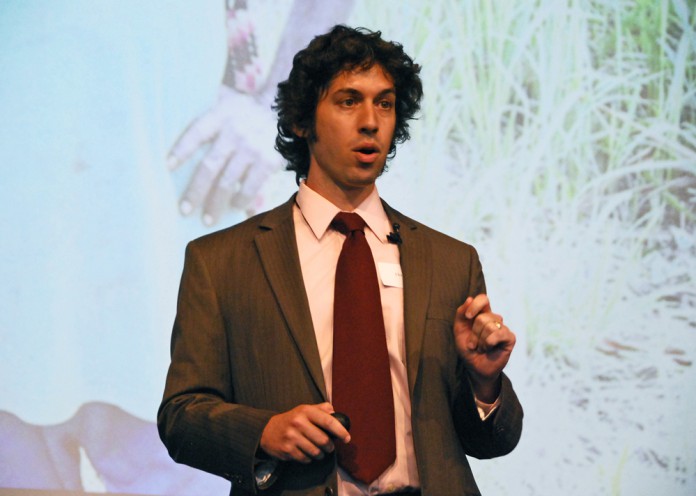 The University of California, Santa Barbara Graduate Division held a competition known as the Grad Slam, in which roughly 80 UCSB graduate students, across various disciplines, presented their research to a wider campus audience beginning April 7. The finals took place at the Corwin Pavilion on Friday, April 18. The winner was James Allen, a first-year geography graduate student involved in the Interdepartmental Graduate Program in Marine Science.

A panel of six judges, including several Professors Emeriti such as Gene Lucas, John Wiemann, and Sarah Cline, deliberated among each other to choose the top three presentations. A special guest who also served as a judge was California State Sen. Hannah-Beth Jackson.

Allen earned a $2,500 research fund. The runners-up, Deborah Barany, from Dynamical Neuroscience, and Damien Kudela, from Chemistry, each received a $1,000 research fund.

Allen’s research views the usage of remote sensing satellite systems as an easier solution  for measuring phytoplankton density. These plant-like microorganisms play a significant role in the ocean and precisely quantifying phytoplankton distributions by using satellite imagery could be beneficial for understanding the “ocean’s role in climate change.”

Barany’s presentation was titled “The Brain in Action.” With her research, she wants to “understand how the brain represents different types of movement.” Research on this field could expand current knowledge on mind-controlled robotic prostheses.

Kudela gave a presentation on “Smart Drugs to Stop Bleeding.” By injecting nanopartilces that travel through the body to reach an affected area, these nanoparticles could initiate treatment of internal wounds. One of the examples he gave is using nanopartilces as a “drug delivery system” for speeding up the clotting process inside the body. He has already received a patent for his work.

“I got feedback every step of the way and they really helped me get to the details of what I actually needed to present, so they helped me think of it, in a kind of new way, to really get this idea out there,” said Allen.

In addition to the more detailed judging criteria, the Graduate Division delineated three essential points for judging presentations: “Impact on an academic field or on society. Clear and compelling presentation. Geared for a general university audience.”

According to the UCSB GradPost, the institution of the Grad Slams at UCSB received a 2013  “Award for Excellence and Innovation in Graduate Education” by the Western Association of grad Schools and the Educational Testing Service.

The Grad Slam is part of a series of events that occur during the Grad Student Showcase; the showcase is part of the Graduate Division’s efforts to celebrate the work of UCSB grad students. Other events in the showcase include an art exhibition, department open houses, readings, and performances.

According to the UCSB GradPost, this tradition of celebrating the work of grad students began in 2005, with an April event entitled Graduate Student Appreciation Week. This event was renamed to Graduate Student Showcase in 2013, said Genetti.

Despite the name change, the purpose remains the same: to recognize all the work and groundbreaking research conducted by our graduate students.

One of the persons responsible for the re-imagining of the appreciation week into a showcase and a slam was Genetti, said Associate Dean of Students Don Lubach.

“One of the goals that I had as dean, when I came here, was to raise the profile of our grad students on this campus,” said Genetti, “and I really wanted a way that I could truly highlight all of the incredible work that they’re doing, to the broader campus so that they could be appreciated for the important role that they play.”