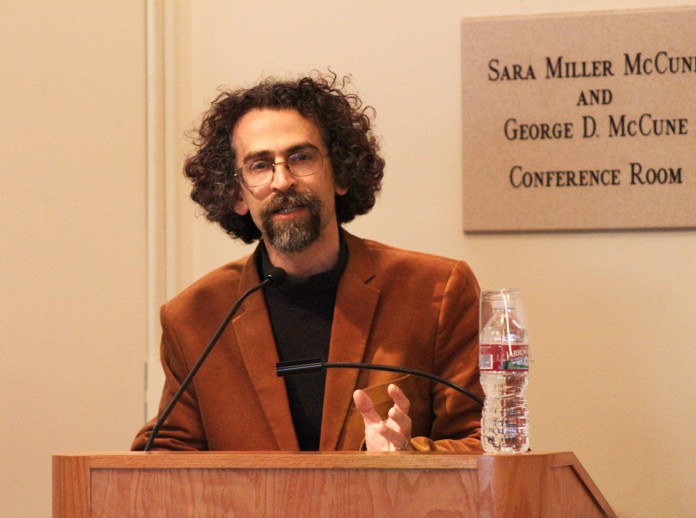 When Americans think of poverty, they commonly picture famished children in third world countries, living on the streets and scavenging for food. Many people don’t realize that poverty exists in America itself. The name “Land of the Free” is only so accurate, and it is often forgotten that millions of impoverished Americans are not free to succeed on their own, let alone with the help of others.

On Thursday, April 3, as part of the Interdisciplinary Humanities Center’s “The Value of Care” series, freelance journalist Sasha Abramsky spoke about his latest book, “The American Way of Poverty: How the Other Half Still Lives.” Abramsky–an acclaimed author whose writings have appeared in The New Yorker online, Rolling Stone, and The Atlantic, among other publications–is currently a part-time lecturer in the University Writing Program at the University of California, Davis.

As he opened his talk, Abramsky recalled the story of Mary Vasquez, a cancer survivor who was working for Wal-Mart at the time. Though she was only 67, Vasquez looked to be “about 85 or 90” due to her “haggard, sunken face,” according to Abramsky. Vasquez made less than $1,800 each month.

“She represented to me the face of the new working poor…each year more insecure than the year before,” said Abramsky.

Abramsky’s retelling of his encounter with Vasquez’s story conveyed to the audience his view toward impoverished America; put simply, it is wrong and we should do something about it. To emphasize this, he illustrated something he dubbed “The Great Risk Shift”: the poorer one is, the greater one is at risk of poverty.

“This country that has built itself on a story of social mobility and self-reinvention [is less] socially mobile than any other nation,”  said Abramsky. “It is more likely in the U.S. for people born in poverty to die in poverty than in any other first world democracy.”

Unfortunately, low-income families are not always the ones at fault for their misfortune. Low minimum-wage standards and an “inadequate” government response contribute, as do employers who encourage their workers to rely on government programs, such as food stamps and Medicare, rather than raising their hourly wages.

Some people view socioeconomic status as something that is always determined by oneself; they think that if you are poor, you are doing something wrong–and there is nothing anyone can do to help you. If these attitudes are adopted, then the poverty level in the U.S. will stay the same, or even increase. As Abramsky stated, we as a society establish chronic, daily insecurity in which people do not have the self-confidence to try to achieve a better life for themselves, and settle for low-paying jobs rather than seeking higher education. As a result, according to Abramsky, there is a “small world of ‘haves,’ an even greater world of ‘have nots,’ and, in the middle, a shrinking middle class.”

Layered within his merciful opinions toward poor America was an even deeper cynicism aimed at the insensitivities of the upper class, or the “haves.” Despite their high incomes, the wealthy do not typically show a desire to help those less fortunate than themselves, and the evidence of a large income gap becomes more apparent.

“What we are seeing is a story of unleashed inequality at a level that we haven’t seen in four–or even five–generations in this economy,” said Abramsky.

In California alone, 9 million people live at or below the poverty line; nearly half of them are eligible for food stamps, and millions are lacking access to affordable health care. Abramsky describes this poverty as a scandal rather than a tragedy, as he believes much of it is attributed to the government’s poor policy choices.

To combat this poverty, Abramsky suggests that more attention to be focused on it, in addition to building empathy by humanizing poverty itself. Focus not on the 25 percent of all children that are impoverished; rather, consider your neighbor’s son, your student, or your coworker’s children who will go to bed hungry tonight.

“You have the imagination to recognize what…opportunities can mean and what realized dreams can mean to yourself and your communities,” said Abramsky.