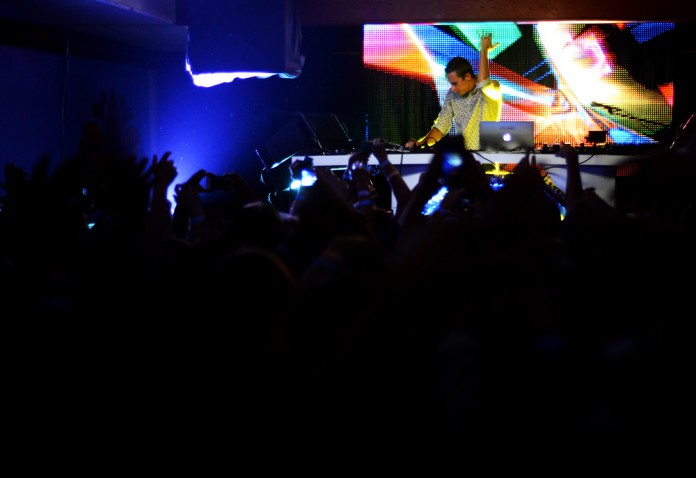 Coming fresh from Coachella, Flume played a strong set at Casa De La Raza this past Sunday, April 20, in an evening presented by Red Eye Entertainment and We The Beat. An electric combination of dance and down-tempo hip hop, Flume’s setlist included hits from his self-titled debut album along with a wide array of his edits and remixes, indicating that the young Australian will enjoy a long and lucrative career.

The 22-year-old DJ and producer began with “Drop the Game” from his recently released EP “Lockjaw,” a collaboration with fellow Australian and Future Classic signee Chet Faker. From there, he transitioned into the song “Sleepless,” which features Jezzabell Doran.

Flume spoke into the microphone, saying, “This is the song that started it all,” referring to the song’s success as the leading single in the EP “Sleepless,” released by Future Classic when he was only 19 years old.

The highlights of his set included the song “Insane,” taken from the deluxe edition of his album and featuring Moon Holiday and Killer Mike, and his unreleased remix of Lorde’s “Tennis Court,” which he debuted both weekends at Coachella. When Flume played versions of Ta-ku’s “Higher,” Rustie’s “Slasherr,” and Hermitude’s “Hyperparadise,” the audience reacted with great enthusiasm, dancing along to the rhythms of Flume’s production despite the lack of space in the sold-out venue. Flume then ended with a bang, spinning his remix of Disclosure’s “You & Me”–a song with over 10.7 million plays on Soundcloud, making it one of the most well received hits of this past year.

Those in the crowd who had seen Flume perform at either of the two weekends of this year’s Coachella may have expected the producer to play a mere repeat of his set from the festival. However, Flume approached this smaller gig with a different mindset than that of a festival performance. He played a variety of songs in a much different order than he had played at either of his two shows at Coachella, including many songs that he was not able to play during his constricting 50-minute time slot at the festival.

Although Flume played many songs from his debut album, he also included songs such as Notorious B.I.G.’s “Juicy,” which he blended into his aforementioned remix of Ta-ku’s “Higher”–a moment that was reminiscent of his set at Los Angeles’s FYF festival this past summer. But, in this performance, the blending of the two songs seemed more natural, as Biggie’s lyrics gradually led into “Higher” and faded away during the song’s bridge and chorus, as opposed to a simple layering of the vocals of one track over the other.

Leading up to his Santa Barbara performance, Flume received an almost unprecedented amount of hype from the locals of the area. However, the excitement was far from unwarranted; his debut album was a chart-topping, two time platinum winning release in his home country of Australia. And since, Flume has gained a worldwide notoriety within the music industry.

Artist such as Ta-ku, Wave Racer, Jagwar Ma, Cosmo’s Midnight, and Flume demonstrate that Australia is undergoing an electronic music renaissance and setting the stage for acts to come. The world better watch out for the surge of talented DJs and producers coming from the land down under.