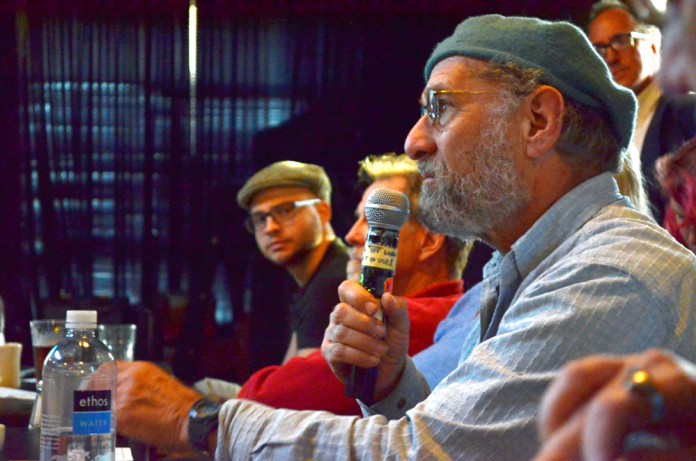 The Kavli Institute for Theoretical Physics (KITP) held their first discussion–dubbed Café KITP–on Wednesday, April 2, to promote science through a modern cultural lens. The event was held at SOhO Restaurant & Music Club on State Street, and is planned to take place every two months.

The event is meant to reach out to the people who are less familiar with the advancements of science, and plans to delve into modern science’s newest and most profound discoveries in new, interactive ways. Last week’s Café KITP centered on the topic of stars and astronomy.

The lead lecturer was Matteo Cantiello, an astrophysicist at KITP with a particular interest in the relationship between the theory of music and the stars above us. He began by explaining a few common facts about stars, such as the fact that they are powered by nuclear fusion, which turns lighter elements into heavier ones. This process, which heats our entire solar system, is one million times more efficient than burning fossil fuels.

After the Big Bang, only light elements (such as hydrogen and lithium) were formed. In the early stages of the universe, only stars formed heavier elements like carbon, a basic building block of life on Earth. When stars subsequently die, Cantiello explains, some of them will release their content into the space. For this reason, Cantiello says, “Stars are the building blocks of the universe.”

Caniello also related stars to the strings on a guitar in a very unique way. When a guitar string is plucked freely, that is, without a finger holding it down, it vibrates with a “resonant frequency,” which is called the “first harmonic.” The sound differs depending on factors such as the material and length of the string. Similarly–but on a much more complex scale–stars have their own “resonant frequency” where oscillations will travel throughout the star. Their “oscillation modes,” as defined by Cantiello, are very complicated but can be “inscribed” into light waves that travel to Earth, which ultimately gives scientists like Cantiello the ability to see what is inside distant stars.

Cantiello went on to describe the planet-finding satellite Kepler, which was launched in 2009. The purpose of the satellite is to find earth-like planets in the universe. Astoundingly, scientists working with Kepler recently estimated that on average, there is a planet orbiting every star in the Milky Way galaxy. Even more amazing is the notion that 20 percent of those planets are in the so-called “habitable zone,” meaning they are an appropriate distance away from the sun to feasibly contain liquid water and are about the same size as Earth.

Considering that there are around 100 billion galaxies in the universe, the existence of planets that harbor life seems more and more probable. With this fascinating statistic, Matteo turned the talk to questions from the audience. One member of the crowd asked, “What is the relationship between science and religion, and do you think there can be both?”

After a pause, Matteo replied, “I think that, above all, the scientific method must not be impaired. There are things we do not, as scientists, know, and some choose to insert God there, which is okay, but the science itself cannot be changed.”

The evening was capped with the audience being invited to sing a song containing an allusion to the stars. Prizes were given out to those brave enough to stand up and sing. The next Café KITP will be held in two months, and the topic can be seen at www.kitp.ucsb.edu/outreach/cafe–kitp.