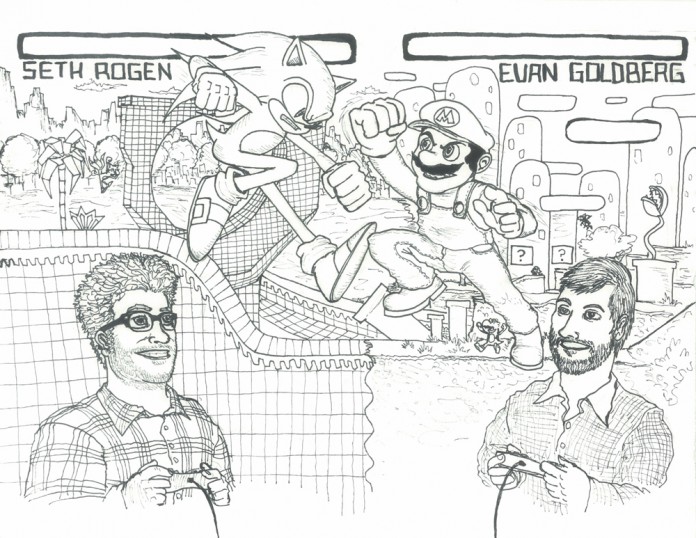 The ’90s video-game console war between Sega and Nintendo is getting the silver screen treatment.

The collective memory of the ’90s generation is forever marked by the epic war waged between video game juggernauts Nintendo and Sega. It was a console clash fueled by attack ads, false promises, and a (virtually) bloody bout between the iconic characters of Mario and Sonic the Hedgehog. Thanks to the creative efforts of Seth Rogen and Evan Goldberg (“Superbad,” “This is the End”), the drama that defined an era will be revived in theaters.

The whole story will be detailed in the upcoming book “CONSOLE WARS: Sega, Nintendo and the Battle that Defined a Generation” by Blake Harris. In a recent press release, publisher Atlantic Books described the title as a “riveting behind-the-scenes business thriller that chronicles how Sega…took on the juggernaut Nintendo and revolutionized the video game industry.”

Harris’s book was picked up by Sony Pictures, and the film adaptation will be reigned in with the producing power of Scott Rudin (“Money Ball,” “The Social Network”) as well as the writing and directing of Seth Rogen and Evan Goldberg.

Few details have been released about the film, as it is still in the earliest stages of development, but according to Atlantic’s press release, Rogen and Goldberg will be both writing the screenplay and directing. The film is expected to surpass the limits of Rogen’s usual “stoner comedy”; however, according to Atlantic publisher Toby Mundy, the film “should appeal to gamers and non-gamers alike.”

The now outrageous line “Sega does what Nintendon’t” as well as Sega’s incredulous claims of “blast processing” were the hot topics in the ’90s-era schoolyard, pitting friends against each other in a dichotomizing gauntlet of nerd loyalty. You may have forgotten about OJ Simpson’s run from the police, or where you were when President Clinton received oral sex, but you never forget which video-game console you aligned with; you were either a Super Nintendo or Sega Genesis kind of kid.

After Atari’s console dominance of the late ’70s to early ’80s and the subsequent video game crash of 1982, Japanese juggernaut Nintendo introduced their 8-bit Nintendo Entertainment System, or NES, to the American market in 1985. The NES revived the gaming landscape with colossal hits such as “Super Mario Bros.” and “The Legend of Zelda.” Sixty-two million NES consoles were sold, assuring Nintendo’s stranglehold on the market while Sega’s competitor to the NES, the Sega Master System, merely scraped by with 13 million units.

In 1989, Sega launched itself into the annals of video game history with the Sega Genesis. It was the sleek, 16-bit console for cool kids. Being one of the first major 16-bit consoles in the North American market, the Genesis easily outshone the aging technology of the 8-bit NES. Sega stormed its way into living rooms across the country on the treads of the Genesis’s impressive graphics and aggressive, youth-oriented marketing campaign.

The console war hit critical mass when Nintendo responded to Sega’s offering with the Super Nintendo in late 1990. The console’s graphics, library of games, and brand recognition easily boosted Nintendo back into the market. The console gained huge success on its established Mario and Zelda franchises, but failed to captivate a more mature generation of gamers by censoring the animated violence in games like “Mortal Kombat.”

Sega was in no position to back down from Nintendo’s dominance so the war was declared, and with the 1991 introduction of Sonic the Hedgehog, Nintendo’s Mario was given a nemesis. After the fog of war settled, a victor was declared in Nintendo. The Super Nintendo’s sales settled at 49.1 million units while Sega fell considerably short with 29 million Genesis units sold.

Sega followed up the Genesis with the Saturn in 1995 and the ill-fated Dreamcast in 1999 before dropping out of the hardware market altogether. The company now exists as a games developer and publisher, even collaborating with Nintendo on titles such as the “Mario and Sonic at the Olympic Games” series and the “Super Smash Bros.” series, in which Sonic makes a guest appearance.

According to Amazon, Blake Harris’s book “Console Wars” will be available May 13 while the release date for Rogen’s film is not yet known.