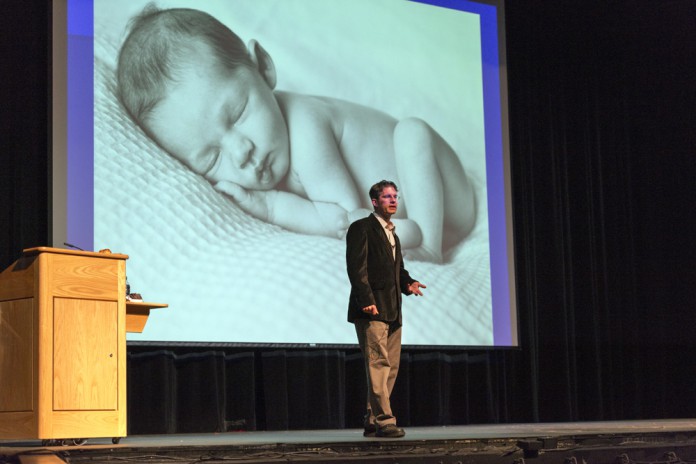 Linguistics Professor Robert Kennedy presented in the fourth installment of the “Last Lecture” series at the University of California, Santa Barbara on Wednesday, Feb. 26. The Last Lecture–sponsored by UCSB’s Music Department and Associated Students–is a series inspired by Randy Pausch’s Carnegie Mellon University lecture that quickly became a viral hit. Professors are nominated by students to give a lecture on any topic of their choice with the hypothetical condition that this would be the last lecture they were to ever give–a concept which Kennedy dubbed “morbid” during his lecture. Though he was, admittedly, nervous to speak in this light, Kennedy kept his cool throughout the course of his lecture, inspiring students to follow their passions, whatever they may be.

Opening his speech, Kennedy shared the most worthwhile, truthful piece of wisdom young people may ever hear: “Devote yourself to learning as much as you can about whatever you want to learn about.”

This advice was given to him during high school by one of his English teachers, and it has stuck with Kennedy ever since. Originally from Canada, Kennedy moved to the Southwest as a graduate student at the University of Arizona after receiving his BA from the University of Ottawa. Upon receiving his Ph.D in linguistics, he moved to Santa Barbara with his wife-to-be and has now been at UCSB for over 10 years.

During his lecture, Kennedy consistently referred to his participation on “Jeopardy!.” His family watched the popular game show throughout his childhood, allowing a young Kennedy to exercise his love for trivia. After years of applying to be a contestant, he finally made it onto the show.

“What appeared to be, at first, maybe a useless skill turned into something I could benefit from quite a bit,” said Kennedy.

According to Kennedy, his experience applying, being rejected, and finally competing on the game show is analogous to the experience that he believes every young person should have: pursuing one’s passions.

“Look what can happen if you actually pursue something that you’re interested in,” said Kennedy.

Though he only lasted until his third game, Kennedy was a “Jeopardy!” champion–a title that will stay with him for the rest of his life–exemplifying how with enough persistence, focusing on one’s true interests will eventually pay off. Kennedy used his lifelong trivia skills to his advantage and ended up accomplishing much more than he ever imagined.

“Fifteen years ago, I never thought I would be giving a speech about ‘Jeopardy!’ as if I would die the next day,” said Kennedy.

Being a firm believer in pursuing what makes oneself happy, I was inspired by the entirety of Kennedy’s speech, which triggered feelings of gratitude and caused me to connect with Kennedy on a more realistic level. Though the Last Lecture series is meant to give the UCSB community a glimpse into professors’ lives, it also allows students to relate to professors on a deeper level than they are able to on a daily basis in a lecture hall.

“You’re on the brink of adulthood, faced with…all these choices, but the choices you make don’t lock you into [just] one thing in your life,” said Kennedy.