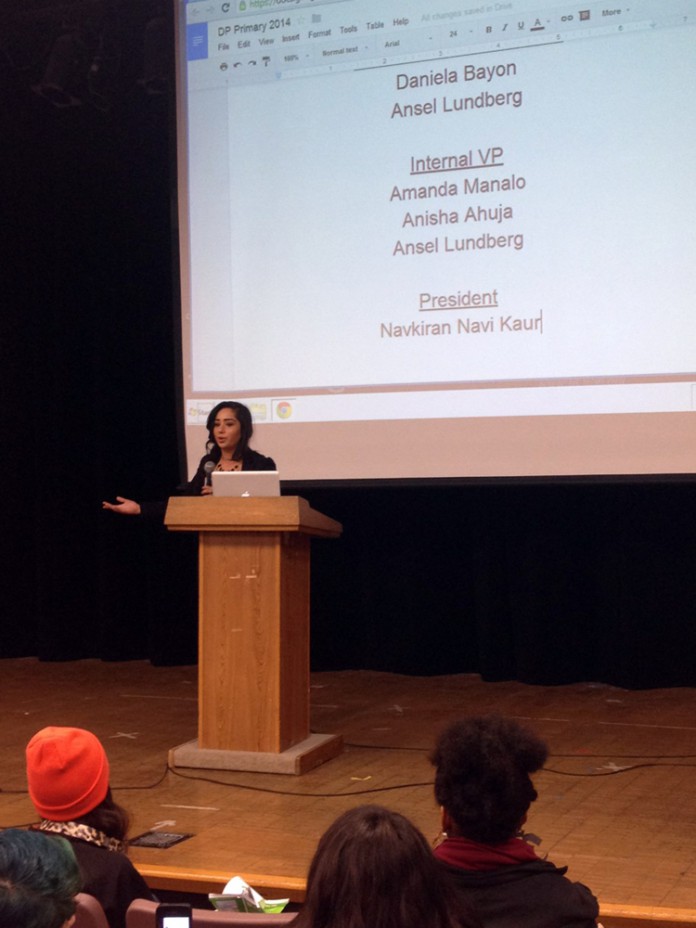 The Democratic Process Party (DP)–one of two main student government parties on the University of California, Santa Barbara campus–held its open primary on Thursday, Feb. 27, in Girvetz 1007 to nominate a new slate of student representatives for the Associated Students 2014 spring elections.

Bethlehem “Mama Betty” Aynalem, a UCSB alum who ran with the DP party when it was first created, and fourth-year history of public policy major Juan Galvan, DP’s 2013 candidate for the position of Internal Vice President (IVP), hosted the primary as emcees.

The procedure of the primary was both inclusive and democratic; potential candidates could be nominated by anyone, and after brief introductions of their personal visions, voting was thrown to the crowd. Voting blocs were divided into four sections: On-Campus & University-Owned Housing, Collegiate, Off-Campus, and Executive. Sitting at the classroom desks, audience members and even the candidates themselves publically voted–no secret ballot–on colored strips of recycled paper handed out by DP volunteers.

According to Associated Students legal code, the official slate of candidates—voted on by the public audience—cannot be released until the third week of spring quarter.

“By committing to be here you are committing to student progress. And that’s exactly what this base and DP Party is here for,” she said. “It is so critical for students to work together, to stand united, to understand our struggles are connected.”

“I want to amplify the voices of the students on the ground that are organizing every day. I want to bridge the gap between AS and the working class students… It’s time to make real progressive change that challenges the institutions that don’t actually want us in these spaces. And that’s what I hope to do for all of you,” she continued, prompting a wave of cheers from the crowd.

In a brief interview following the primary, Kaur related her past experience with racial justice issues, student loan debt reform, and advocating for women’s rights.

Speaking on the values of the DP Party, Kaur noted, “Fundamentally we are a progressive, action-oriented, very issue based party.” She also reinforced the party’s effort to be “representative of all different types of students, especially the underrepresented and underprivileged students on this campus that really don’t have a say normally on Senate.”

Many of the nominees employed a very focused rhetoric, prompting an enthusiastic dialogue with the audience.

“I’m really passionate about giving a voice to those who are not able to do so for themselves,” said first-year pre-political science major and On-Campus Sen. nominee Lola Maraiyesa. “That’s one of the main reasons I’m here pursuing a position as On-Campus Senator.”

Much of the audience—DP Party’s core, and often most vocal advocates—was familiar with, or directly involved in, campus organizations such as Invest in Graduation Not Incarceration, Transform Education (IGNITE); Improving Dreams, Equality, Access and Success (IDEAS); and the Student Commission on Racial Equality (SCORE).

Though the evening’s speakers touched on a wide assortment of topics, a few common themes emerged: advocacy for underrepresented communities, disillusionment with the current AS government, student safety in Isla Vista (with many allusions to the recent Isla Vista rape cases), support for divestment from companies that profit off of human rights abuses, and environmental justice.

The nomination process allowed each potential candidate a pulpit from which they could explain their vision and personal beliefs, and some took the opportunity to condemn the status quo.

Letters and Sciences Collegiate Sen. nominee Sally Oh, a second-year global studies major and self-described believer in communism, derided the “incompetence” of AS, even suggesting that the whole system be abolished.

On a few occasions, nominees referred to specific aspects of their prospective positions. Hari Kota, third-year biological anthropology major and nominee for College of Creative Studies (CCS) Collegiate Sen., expressed her dissatisfaction with the CCS program, explaining why, after two years in the college, she decided to switch majors.

“Even though [CCS] promotes itself as open and very conducive to research and creating your own knowledge, I felt ostracized by the community and I found that it was really stressful,” Kota said. “However, that’s not to say that it can’t be improved, and that’s what I’d like to do… I’d like to make CCS more accessible.”

The party base didn’t just come out to speak on the issues; they were also there to celebrate their advocacy from the past year. But the party universally acknowledged that more work was necessary.

DP nominee for External Vice President of Statewide Affairs Kashira Ayers, a third-year feminist studies and communication double major, recalled her work with IGNITE and her opposition to the appointment of UC President Janet Napolitano before rallying the audience to the notion of essential social change.

“If you want true change, if you want true revolution, then it starts in this room—it starts with us,” she proclaimed. After noting her disappointment with the lack of transparency surrounding AS Senate legislation, she continued, “There is so much happening outside campus that is affecting us as students…”

Like “Mama Betty,” much of the party’s old guard is still around to provide guidance and insight into the election process, even though they themselves can’t run. Megan Foronda, 2013 DP candidate for president and fourth-year sociology major, could be seen sitting up front near the stage or passing out voting ballots to the crowd. Foronda described her current role as “more of a campaign organizer.”

“I’m really helping to coordinate the party and basically come up with strategies…in terms of how we can be really effective this year and how we can get better results and how we can do better service for students on campus,” she said.

After experiencing a devastating defeat in the 2013 AS Elections—DP Party lost to Open People’s Party (OPP) in every category except the University Off-Campus Housing Representative, for which they ran unopposed—party leaders had to reevaluate their strategy for victory.

Kaur noted it would be essential for DP to be “more organized in our campaign, be more efficient, be more on time to everything and also just be more visible… I think we’ve been doing a lot better already.”

Foronda agreed, and expressed optimism for the upcoming election.

“The whole point of DP Party is that we’re representing all of the university, and I think that really showed tonight at the primary,” Foronda said. “I’m very confident that we will do even better this coming year.”

Despite last year’s losses, most of the speakers held fast to their principles, unwavering in their commitment to the values of social justice and education. Some even expressed such a lack of faith in AS Senate that they touted alternate extracurricular involvements as more effective vehicles of change.

Kaur suggested that maintaining the party platform was more important than diluting their message for wider campus support.

“I do think winning is important, in terms that obviously we want to change the face of things and actually get things done, but I wouldn’t sacrifice our own values to make it seem more broader to the student campus,” she said. “I feel like the issues that DP Party works for and fights for affects every single student on this campus… and affects students statewide and affects students nationwide.”