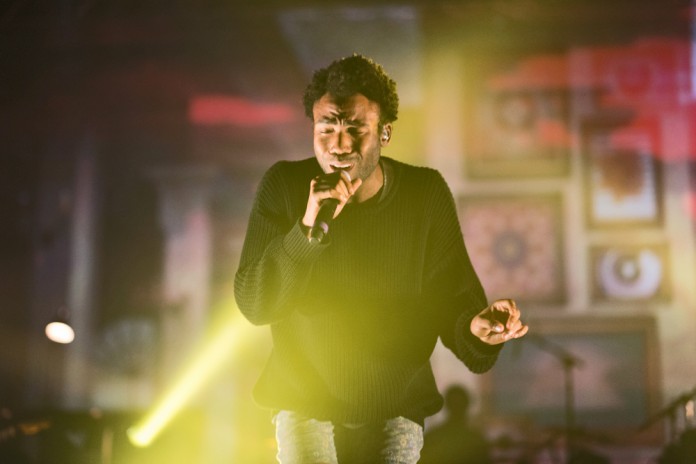 A rising star in the rap industry, Childish Gambino kicked off his “Deep Web” Tour with a roaring mosh pit at University of California, Santa Barbara’s Thunderdome on Friday, Feb. 28.

The tour supports his sophomore album “Because the Internet,” released in December 2013. Gambino’s tour was supposed to begin in Oakland but was postponed due to technical reasons, marking UCSB as Gambino’s first stop.

The rapper’s memorable performance was full of electric energy and witty one-liners that were delivered with fervor. A full band–consisting of an electric guitarist, bassist, drummer, and a keyboardist–accompanied Gambino, providing heavy beats the crowd danced along to.

“The concert was phenomenal,” said first-year art major Mason Robetson. “It was a long wait, but totally worth it to see the energy Gambino brought to the stage. He absolutely killed it.”

Thousands of UCSB students braved the cold, rainy weather in order to attend the sold-out concert hosted by the Associated Students Program Board. Although doors opened at 6:30 p.m., attendees didn’t get in until 7:30 p.m because of technical difficulties, and many students had been waiting long before then. But after all, what’s a rap concert without lines wrapping around a building, tickets being auctioned for double the price at the door, and hot, sweaty moshpits?

However, most agreed that once Gambino took the stage, his performance compensated for any previous setbacks of the night. His dramatic entrance was perfectly executed: the instrumentals escalated to a dramatic crescendo, the virtual backdrop portrayed an antique room with eerie paintings and chandeliers, and multicolored laser-lights flashed throughout the events center.

The rapper opened up his act with his song “Crawl.” When he stepped into the spotlight and delivered his first few lines, he was immediately greeted with wild cheers and screams from the crowd. Decked in a black long-sleeved shirt and khaki shorts, Gambino flawlessly delivered his punny lyrics, rapping, “Rec League, I ain’t paying a ball / Y’all b-string like a broke guitar / And I still put it down like the family dog.”

“The performance was really fun,” said Jordan Petrich, a first-year political science major. “Childish Gambino was really amazing, even though I’ve never been to a mosh pit before or anything that crowded, so that was new.”

For the rest of the hour-long performance, Gambino performed songs from his second album as well as his first album, “Camp,” including the tracks “World Star,” “Telegraph,” “Sweatpants,” “3005,” and “Heartbeat.” He spit his signature sharp one-liners without skipping a beat, living up to his reputation of lyrical genius.

“Got no patience, ’cause I’m not a doctor,” Gambino smoothly rapped. “Girl why is you lying, girl why you Mufasa / Yeah, mi casa su casa, got a stripper like Gaza / Got so high off volcanoes, now the flow is so lava.”

“It was amazing,” said Jesa De Leon, a first-year economics and accounting major. “He was good live… Some people, when you listen to their recordings and then hear them live, they’re terrible. But I think his concert was definitely worth the money.”

Gambino’s humorous lines are no surprise considering his career as a comedian. He is known by his real name, Donald Glover, for his role in the television show “Community.” Gambino’s lyrics are not only entertaining, however, but also sophisticated. Instead of resorting to chart-topping explicit lyrics as some of his competitors do, Gambino combines clever wordplay with insight to explore deeper topics of loneliness, fame, fortune, and the music industry.

Gambino has made a name for himself in the world of rap, topping the Billboard Hip-Hop charts at number two with his first album. He has received critical acclaim for his talent as both a rapper and a singer, which is relatively rare for musicians.

“He’s one of the few rappers who can actually sing,” said third-year psychology major Evan Biason. “It’s spine-tingingly good, considering he’s a rapper. Sometimes, I even thought the singing was from backup vocals.”

At the end of the night, Gambino wrapped up his show with humility and gratitude toward his fans.

“Santa Barbara, I can’t think of a better place to start my tour,” he said. “Thank you for being amazing.”