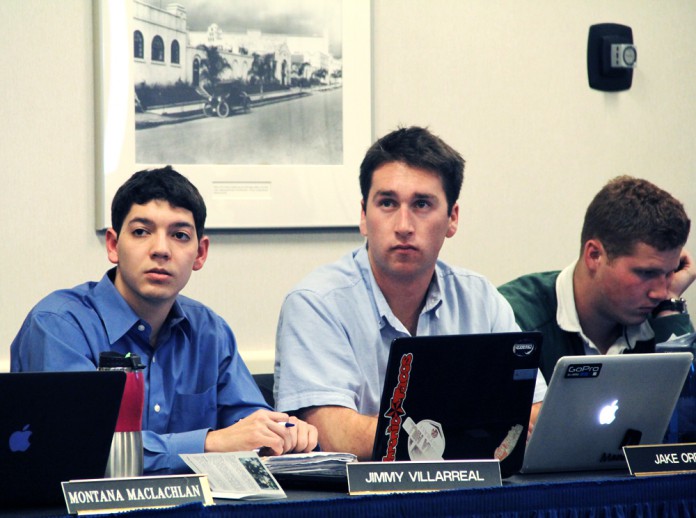 Associated Students Senate resolved to require warnings from professors about class content containing material that could potentially trigger symptoms of Post-Traumatic Stress Disorder at its meeting on Wednesday, Feb. 26.

“A Resolution to Mandate Warnings For Triggering Content in Academic Settings” includes a list of content that is considered to trigger such symptoms and which therefore should be articulated in a syllabus given out at the start of the quarter. The list includes rape, sexual assault, abuse, self-injurious behavior, suicide, graphic violence, pornography, kidnapping, and graphic depictions of gore. As stipulated by the resolution’s terms, students who feel they may have a negative emotional response to such content, including distressing flashbacks or memories, should be allowed to leave the classroom or skip class altogether without being penalized.

Chief of Staff to the Student Advocate General Bailey Loverin, the resolution’s student sponsor, said during a public forum presentation that her decision to take part in the creation of such legislation is based on her own personal experience, as a survivor of sexual assault who felt that she was unfairly exposed to triggering content in one of her classes.

The movie being shown in Loverin’s class included two scenes in which an instance of sexual assault was insinuated and one with a graphic depiction of rape. Loverin said she found the content too difficult to watch.

“But even more difficult was getting up and walking out and potentially exposing myself as a survivor and the stigmas that tend to come with that,” Loverin said. “The way people treat you with pity, the way they look at you differently, talk to you differently, and even just treat you coming in and out of those sore settings.”

On-Campus Sen. Nikki Calderon, author of the resolution, encouraged all collegiate senators to ensure that, should the resolution pass, it be brought to the dean of each college to have its message conveyed to all campus instructors. She also mentioned that both University of California, Santa Barbara Counseling and Psychological Services and the campus women’s center have offered to collaborate on maintaining an up-to-date list of potentially upsetting triggers.

The Senate also passed a resolution supporting the creation of a program dubbed “Gaucho FYI Part II” that would take place during students’ transitions from their first to second years at UCSB. The original Gaucho FYI program, which is mandatory for first-year students to attend during fall quarter, provides information and advice about numerous health and safety issues undergraduates may encounter during their college careers.

“The problem is that a lot of first-years move into IV after their first year, and they don’t know what to do with their lives,” said resolution author and Off-Campus Sen. Beatrice Contreras.

Therefore, this extension of the original Gaucho FYI program would focus on developing the necessary life skills to learn to function in a setting more independent and autonomous than the accommodating environment of a residence hall. External Vice President of Local Affairs Alex Moore has been working closely on the program’s development as well.

“A Bill to Amend Standing Policy #23 to Regulate Expenditures on Food at Meetings” was tabled earlier that evening. If passed, the bill will provide more flexibility to the budgets of AS Boards, Committees, and Commissions (BCCs) for food for their meetings. A previously passed bill had, in the eyes of many BCCs, inhibited this flexibility.

“This one has a limit that’s sort of custom-tailored to all the entities,” said author of the new bill, On-Campus Sen. Andrew Neiman.

A motion was made to bundle and collectively table a series of bills regarding the impending restructure of Associated Students. A separate discussion of those bills was held at a meeting the subsequent weekend, and the bills will be voted on at the Senate’s Mar. 5 meeting.