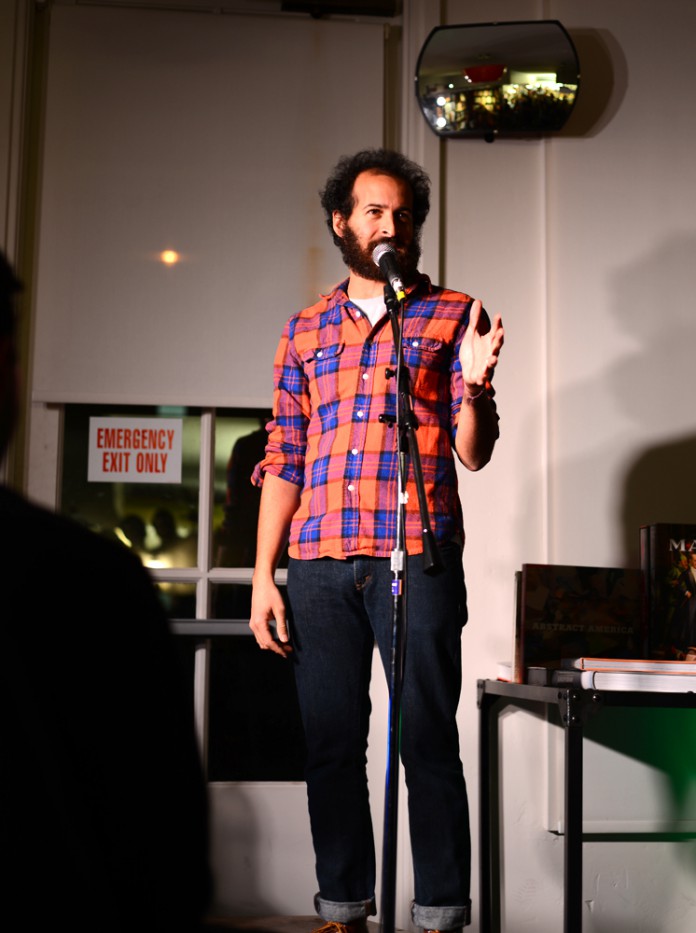 It was an evening filled with sweet words leaping from the mouths of inspiring yet quirky performers. The outside air creeping into the shelf-lined rooms gave the implication that it was summer once more, if only for a night.

On the evening of Feb. 13, in an event hosted by University of California, Santa Barbara’s MultiCultural Center, renowned poet Anis Mojgani performed spoken word at Granada Books on State Street in Santa Barbara–and not a soul was left untouched. Though the bookstore has been open for less than a year, its status as a new Santa Barbara business did not keep college students and 30-somethings alike from crowding with strangers in order to hear the delicious sounds of spoken word. Some were even willing to sit on the floor for two or more hours, watching Mojgani speak on the makeshift stage positioned only a few feet away.

Before Mojgani took the stage, opening acts and fellow poets Fritz Silverbaker and Jeremy Radin performed their original work. Silverbaker wittily shared his Brooklyn anecdotes throughout the course of his performance, inserting snarky comments with every breath.

Soon after, Radin gave an interesting display of his work; his poems told stories both relevant to his life and not, and his experience as an actor shone through each piece he performed. One poem particularly struck me; a slightly biographical piece entitled “Slow Dance with Sasquatch.” This piece, which is also the namesake of Radin’s collection of poems, tells the story of a group of Sasquatch-ian men awaiting their princesses who never come. Radin compares this poem to his high school days, in which he “looked just like I do now” and was never popular with the ladies. Each of Radin’s poems is equally symbolic, and the characters he creates really build on the raw emotion of his performances.

After the two openers, Mojgani captivated the audience by just stepping onstage. He began his performance looking like a hipster straight out of Amoeba Music, slowly proving his identity as an insightful poet as he shared glimpses of his life with every escaped phrase from his lips. The glare of headlights through the emergency exit door provided not a distraction, but rather a spotlight, unintentionally shining on the intelligent figure who claimed to be “just like you.”

Each of Mojgani’s poems has a separate theme, be it his childhood, his wife, or his life as an assumed terrorist. Consistently throughout the evening, Mojgani strived to identify with the audience, such as in his poem “Here Am I,” which begins, “We all wanted that high school sweetheart. We wanted to be young in the fifties with meatloafs and sock hops and lawns so perfect they looked like Clark Gable was kissing.”

These words of affirmation resonate particularly with college students, trapped in the limbo of their lives where they are told they are too young for half of what they want to do and too old for the rest. As indicated by his website, ThePianoFarm.com, Mojgani is frequently asked what advice he has for young people who are interested in pursuing careers in the arts, much like he did.

“Work, work, work–don’t be afraid to make things that are unsuccessful or ‘bad,'” said Mojgani. “Follow your heart and that which will make it happy. Don’t be afraid–be fearless in risk-taking.”