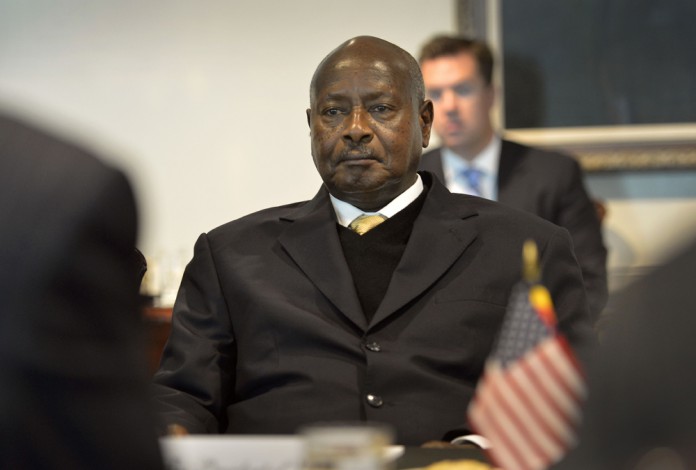 Ugandan President Yoweri Museveni signed a controversial new bill into law on Monday, Feb. 24, under which homosexuals could be sentenced to life-long imprisonment.

The proposed law criminalizes homosexuality and makes it a crime to not report homosexual activity. In addition, the law makes it illegal to promote homosexuality–even including talking about it without condemning it.

The new legislation requires 14 years in jails for first-time offenders and allows life imprisonment for acts of “aggravated homosexuality.”

“I am so deeply disappointed that Uganda will shortly enact legislation that would criminalize homosexuality,” said Obama. “The Anti-Homosexuality Bill in Uganda, once law, will be more than an affront and a danger to the gay community in Uganda; it will be a step backward for all Ugandans and reflect poorly on Uganda’s commitment to protecting the human rights of its people.”

Museveni wants to approve the law before foreign media in order to assert “Uganda’s independence in the face of Western pressure,” a spokesman said.

The United States is currently one of Uganda’s largest aid donors, and Obama told reporters that the new legislation might complicate the relationship between the two countries. The United States gives Uganda roughly $400 million a year, and Uganda serves as an important regional ally for the United States.

“As we have conveyed to President Museveni, enacting this legislation will complicate our valued relationship with Uganda,” said Obama. “At a time when, tragically, we are seeing an increase in reports of violence and harassment targeting members of the LGBT community from Russia to Nigeria, I salute all those in Uganda and around the world who remain committed to respecting the human rights and fundamental human dignity of all persons.”

University of California, Santa Barbara students active in the LGBTQ community also reacted negatively to the proposed legislation in Uganda.

Co-chair of Queer Student Union (QSU) Chris Buck, second-year sociology and financial mathematics/statistics double major, feels that, although Obama’s statements toward Uganda are positive, he should focus more on the progression of gay rights within the United States.

“Though it is exciting to see the president publicly state [support for] gay rights, I feel that Obama is generally missing the mark on the progression of gay rights in the U.S.,” said Buck.

For example, Buck feels that Obama’s focus specifically on gay marriage is misguided.

“While marriage equality is important, I believe [that] Obama should be using his voice to bring focus onto more important LGBTQ issues, such as the high rates of LGBTQ youth homelessness,” he said.

Refocusing on Uganda, Buck said that he would like to see a more active response to the proposed legislation, citing the United Nations’ Declaration of Human Rights as grounds for action.

“This bill clearly violates multiple articles of the Universal Declaration of Human Rights laid out more than 60 years ago by the general assembly of the United Nations,” he said. “[Obama’s] statement…reads as a formality.”