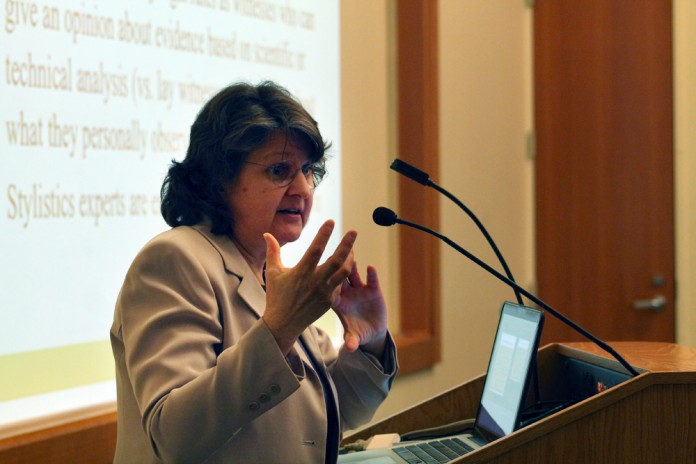 Feb. 21 was named International Mother Language Day by the United Nations Educational, Scientific, and Cultural Organization (UNESCO) in remembrance of University of Dhaka students who participated in the Bengali Language Movement 62 years ago. The student activists were killed in their protest to have Bengali recognized as an official language of Pakistan.

“The conference…seeks to promote multilingualism, awareness of the plight of language minorities, tolerance toward different cultures and the preservation of linguistic diversity,” according to the UCSB press release.

Chaski is a computational linguist and executive director of the Institute for Linguistic Evidence (LLE). She has been consulted and testified in courts up to the federal level, and has published over 50 articles.

Chaski presented many real case scenarios in which forensic linguistics is used in law, the first involving a suicide note found on a home computer after the death of a healthy man.

“It showed me the absolute seriousness of this field,” Chaski said. “What you’re doing has real life significance, and is going to really affect somebody.”

This stylistic approach separates grammar into “bad” and “good” grammar. However, this is not always the best approach when identifying an author in a forensic linguistic setting.

Chaski finished by welcoming interested scholars into the community of forensic linguistics.

Carreira, professor of Spanish at California State University, Long Beach, presented “Lost in Translation: Mapping the Value of Heritage Languages and Heritage Speakers” next. Her research is about heritage languages, identity, and developing and maintaining one’s heritage language.

“Twenty-two percent of children in the country speak a language other than English at home,” Carreira said. “For California it’s 46 percent.”

She talked about the possibilities that heritage learners and speakers—people raised in a home where a language other than English is spoken—possess, including valuable linguistic and cultural skills. Her focus extends from linguistics to the sociocultural aspects of language.

“I want to look at how these young people negotiate these very difficult situations…and their ability to straddle two worlds,” Carreira said.

Her research has concluded that the majority of people report that having a mother tongue has benefits, from making friends at school and understanding other people better to, very importantly, having the ability to understand oneself.

Carreira has examined foreign language classes and believes that they could improve. Many textbooks don’t account for the perspective of two different languages and cultures that many heritage language learners must adjust to. Additionally, many learners of a language are of that descent, but are not native speakers, and that is not taken into account; most classes contain a mix of native and non-native speakers.

“Heritage languages have value to others and society,” Carreira said. “It’s the ability to help others in a variety of ways, particularly by engaging in language and cultural brokering, which are critical skills for teachers, social workers, healthcare professionals, and business professionals.”