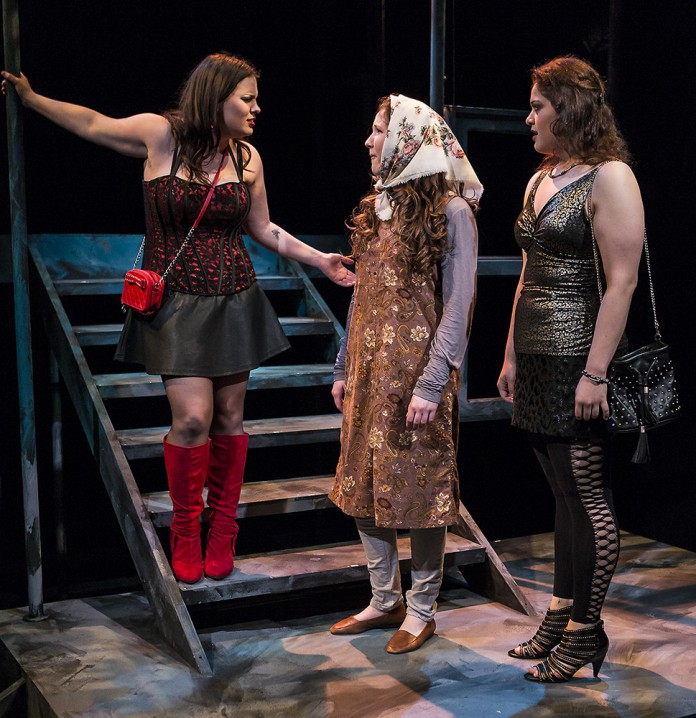 A dark, curious forest of twisted tree trunks are lighted by deep blues and purples, as a lone female voice sings a haunting Russian melody. A sinister mist floats onto the peculiarly enchanting scene.

The production focuses on the transformation of the young heroine Annie (fourth-year Sophie Hasset). At 20-years-old, the doe-eyed American girl voyages to her motherland of Russia to improve her accent and learn about the Russian business economy. Annie’s mother warns her of witches and darkness, pleading with her dyevushka to sleep with one eye open. As young Annie realizes her new location in the edged land, where reality dims by the second, fairytale symbolism presents disorder and danger in a very potent stew.

With narrations delivered by various monologues, the play centers around a smattering of classic fairytale legends. The story of Baba Yaga, the Russian wicked witch, is represented by Annie’s aunt Yaroslava (fourth-year Madelyn Robinson). As this woman grows suspiciously eerie, Annie is soon trapped within a witch’s chamber. True malicious intent is formulized when the folkloric witch-pestle appears. Yaro Slava uses this to bludgeon Annie, pounding her fantastical suspicions of evil into reality. After outsmarting a basket of bewitched potatoes, Annie manages to successfully escape. In this scene, the overall humor of the play resonates profoundly.

Katya (third-year Zurian Zarat), a young mistress to a married man, envies the riches and opportunities of the elite. Katya’s story is based on the folklore of a czar who proposes to a gifted young girl after she solves his riddles. She leads Annie into the deep, urban forest of designer handbags, stilettos, and excessive cleavage. Diverted away from innocence, Annie’s transformation as the story’s heroine is initiated.

On the opposite end of modern materialism, another fairytale emblem is housed within humble walls ruled by a transmogrified bear. This violent bear symbolizes the present patriarchal domination and domestic troubles in Russia. This chronically-intoxicated bear rules over a young woman named Masha, who is trapped by the animal’s oppression. With vivacity and subtlety, third-year Soren McVay artfully characterizes this heart-torn, benumbed young woman.

Slowly recognizing the telltale signs of danger, young Annie sets upon a solo venture for a fairy godmother of sorts. She finds Nastya (third-year Quinlan Fitzgerald), a heart-hardened prostitute, who soon formulates a plan to catch the “bear” that has taken their friend. Nastya’s character depicts the harsh brutality and coldness of many a woman ruined by a man. Her character princely exemplifies the flurries of obscenities and loose language that is notable in the production. However, the sometimes vulgar diction and attitude presents a surface comedic nuance in a spread of otherwise darkly complex material.

Closing the last chapter of the storybook, the three women arrive at the bear’s doorstep to save Masha. In their hands they hold a pie, a blindfold, and an axe. This witty display of female empowerment and authority almost falls short when Katya hesitates, leading the plan astray. But the purest hands grab the axe, and young Annie throws her back into the swing. She tears the bear’s digestive tract open, releasing more than just a grateful Masha. In the final scenes, it is apparent that on top of her birthright, Annie has also claimed her courage and womanhood.

Miroshnik’s play not only sheds light on the social history of the former Soviet Union, but by incorporating traditional elements of Russian fairytales, she also illuminates present-day issues just as perversely as the folkloric darkness. The production was supported by a strong cast of six women, captivating audience members with youthful energy and comedy, most remarkably through passionate monologues and compelling story-telling snippets. Filling the UCSB Performing Arts Theater with bewilderment, “The Fairytale Lives of Russian Girls” offered a revitalizing take on a young woman’s journey into adulthood.