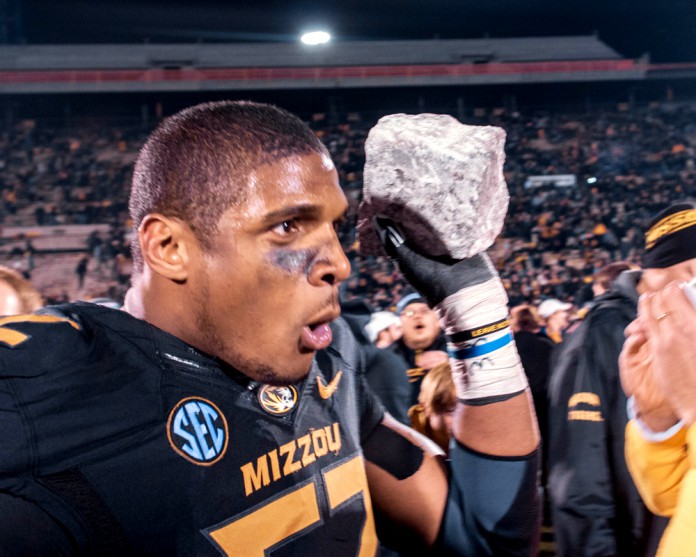 Michael Sam is the most interesting player in football heading toward the NFL draft. In his final year at University of Missouri, Sam led college football’s Southeastern Conference (SEC) in sacks and tackles for a loss, while tying Missouri’s single-season record for sacks. He was named SEC co-defensive player of the year, and voted a consensus college football All-American. All very impressive accolades, but not what makes him a story. The reason Michael Sam will be the most talked about football player for the next few months is that on Feb. 9, 2014, he publicly came out as a gay.

Despite the fact that there are several former NFL players who have come out after retirement, Sam would be the first openly gay man to play in the league. Since his announcement, there have been some questions of how that will work out—for him, and for the team that drafts him.

A couple unnamed NFL general managers (GMs) voiced their concerns in a recent Sports Illustrated article. One GM said, “The question you will ask yourself, knowing your team, is, ‘How will drafting him affect your locker room?’ And I am sorry to say where we are at this point in time, I think it’s going to affect most locker rooms. A lot of guys will be uncomfortable. Ten years from now, fine. But today, I think being openly gay is a factor in the locker room.”

Since that article, many have been quick to respond to this GM’s comments, and none better than Texas sportscaster Dale Hanson, who said, “You beat a woman and drag her down a flight of stairs, pulling her hair out by the roots? You’re the fourth guy taken in the NFL draft. You kill people while driving drunk? That guy’s welcome. Players caught in hotel rooms with illegal drugs and prostitutes? We know they’re welcome. Players accused of rape and pay the woman to go away? You lie to police trying to cover up a murder? We’re comfortable with that. You love another man? Well, now you’ve gone too far!”

Not all that long ago, GMs were claiming that introducing African-Americans into the locker rooms would be uncomfortable. And now, like then, they are probably correct that there will be players uncomfortable with Sam being drafted into their locker rooms. It is almost impossible to walk into a locker room with unanimous support, no matter who you are, and Sam will have a harder time than most.

Sam said on an ESPN interview that he knows there will be hardships to come because of his sexuality, but that he’s ready for them. He also knew there would be players uncomfortable with it when he came out to his team before his senior year of college. But he got through those with no public problem and lead Missouri to their best record since 2007, and a Cotton Bowl victory, also being voted the team’s Most Valuable Player.

What is there about the kids on the Missouri college football team that makes them more well-equipped to handle this situation than the average NFL player in the locker room—presumably more mature men? The concern that Sam isn’t big enough for the NFL, and doesn’t have the strength to rush effectively from the outside against NFL offensive linemen might be legitimate. The concerns that his presence in the locker room will be divisive, or a “media circus,” are not.

The people doing the drafting in the NFL are, for the most part, older and less progressive than the players in the locker rooms. They might claim to be worried about team chemistry, but are more than likely hiding behind that as a shield to their own prejudice. In the end, the smart teams will draft him based on his talent, and the other teams will let his sexuality define him.

There is an element of a self-fulfilling prophecy to the NFL draft. Teams think that a player’s stock has gone down and therefore believe they can get him later in the draft, and so he falls more than he would have. Many teams have recently come out saying that they would draft Sam regardless of his sexuality, but the real test will come on May 8, the first day of the NFL draft.