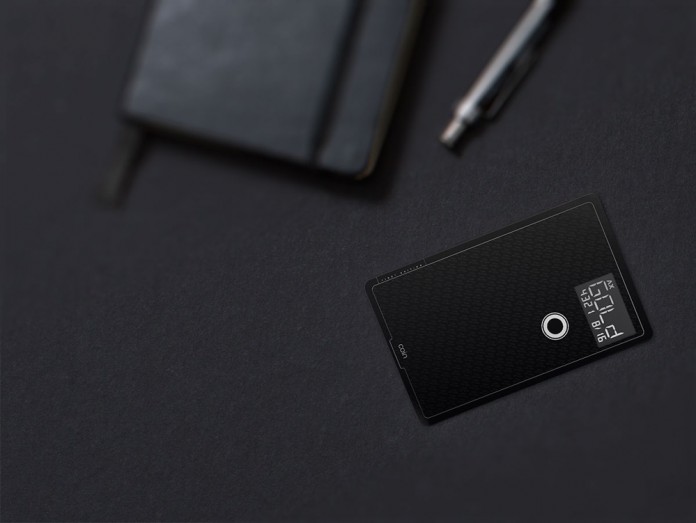 Coin, an electronic card that can store and dynamically emulate your credit, bank, and rewards cards, may lighten your wallet in more ways than one.

Coin acts like a credit card chameleon. Its goal is to replace the multitude of cards in your wallet with one programmable card. Coin comes with a small reader that you use with your smartphone to scan your credit, bank, gift, or rewards cards. The info is then stored in an official mobile app and sent to the Coin card via Bluetooth. With the push of a button, Coin’s dynamic magnetic strip switches between and emulates the plastic in your wallet. There is a small screen that displays the emulated card’s name, as well as the expiration date and CVV. Coin swipes just like a conventional card and can be used in ATMs as well.

Coin was first unveiled as a crowdfunding project in November 2013. Pre-ordering the device cost a total of $55, and, according to an interview with CNN Money, founder and CEO of Coin Kanishk Parashar said that their startup goal of $50,000 in pre-orders was met in just 40 minutes. The company has since gone on to raise $15 million in Series A funding according to CrunchBase.

Crowdfunding the project proved Coin’s popularity, but also opened a discourse of criticism. After funding the project, some buyers were less than thrilled with the prototype. According to ValleyWag, one crowdfunder, upon seeing a prototype demonstration video of Coin, said that it “actually doesn’t look as good as I thought it would at this point. Looks like it’s going to break when he tries to switch card numbers.” In response to the criticisms of the device, Parashar said in an interview with CNN Money, “Everyone forgets that this thing is six months old. It takes time to put it everything together fully [sic].”

There are also concerns from the tech community regarding Coin’s proposed security features. According to the Coin website, their “servers, mobile apps and the Coin itself use 128-bit or 256-bit encryption for all storage and communication (http and Bluetooth).”

Coin will also utilize a tethering system with your smartphone, in that it “can alert you in the event that you leave it somewhere, automatically disable certain device functions based on proximity to your phone, or fully deactivate itself based on the amount of time it’s been away from your phone.”

A caveat with the technology behind Coin is its finite battery life. Coin doesn’t have a rechargeable battery and in an interview with TechCrunch, Parashar said that “they will last about two years.” After that time, a new Coin card will have to be purchased, and at the proposed $100 price point, this may dissuade some consumers.

Legal issues have also arisen around Coin. In a recent article from Recode, it was revealed that Amazon had filed for a patent in March of 2012 that describes a programmable card very similar to Coin. The patent has not yet been granted. Recode contacted Parashar regarding the issue, but he “declined to comment on the Amazon patent application as well as the question of how Coin will protect the technology it’s creating.”

It remains unclear if Coin will meet the expectations of its buyers or simply lighten their wallets. Coin is expected to ship to its pre-order customers this summer.