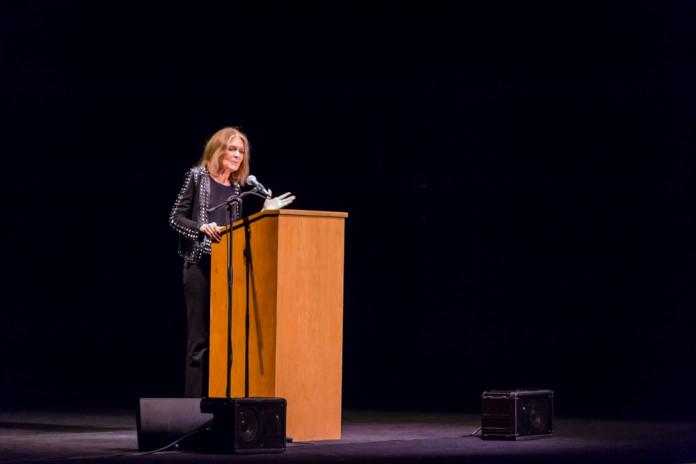 Famous journalist and feminist Gloria Steinem came to the Arlington Theatre in downtown Santa Barbara on Thursday, Feb. 14, in an event presented by University of California, Santa Barbara Arts & Lectures. The 2,000-seat venue was full of UCSB students as well as interested members of the community.

Steinem travels across the country as a community organizer, lecturer, and spokeswoman on issues of equality. Steinem advocates for equality not just across boundaries of gender, but also sexuality and race. Steinem co-founded Ms. Magazine in 1972, she has published four books, and written innumerable articles. In 2013, Steinem received the Presidential Medal of Freedom.

The event, entitled “The Longest Revolution: An Evening with Gloria Steinem,” was sponsored by Sara Miller McCune and Marcy Carsey, with the community partner of Orfalea Foundation. The event comprised a lecture by Steinem and a Q&A session with the audience.

“The fact remains that equality is still a goal, not an accomplishment,” said Orfalea. “[Steinem] is a voice for the voiceless and a force for change.”

Orfalea’s introduction was followed by thunderous applause as Steinem walked toward the podium. In her opening commentary, the activist joked that she was still not accustomed to public speaking. She expressed great excitement at the fantastic women in Santa Barbara and her hopes to turn the lecture into an organizing meeting to spur activism in the community.

The title of Steinem’s talk refers to the long revolution that must occur to foment radical change in the structure of society for equality between men and women. Steinem criticized discussion that feminism on the scale of her actions in the 70s was no longer needed.

“Declaring the movement over is the polite form of opposition,” said Steinem.

Steinem affirmed that the revolution would take a great deal of time and effort to achieve its goals. Steinem acknowledged how far women have come in the past 40 years, but also emphasized how much is left to accomplish.

“If it took 100 years to legalize [female] identity,” she said in reference to women’s suffrage, “it will take 100 more for legal equality.”

In a voice full of passion, the famed feminist condemned the forms of hierarchy and patriarchy that prevent women from gaining equality. According to Steinem, patriarchal society controls women’s reproduction to maintain control over race, class, and caste and to maintain systems of inequality.

“Feminism is controlling our own bodies and our own decisions,” said Steinem.

“Equal pay would put nearly 200 billion dollars into the economy,” said Steinem. Equal pay, according to Steinem, would be the largest, most far-reaching economic stimulus package in the United States. She believes that equal pay is not just a feminist issue, but an issue of the economy.

The audience acknowledged Steinem with a standing ovation.

“I am not passing the torch [of feminism],” said Steinem, “but keeping it to light the torch of others.”