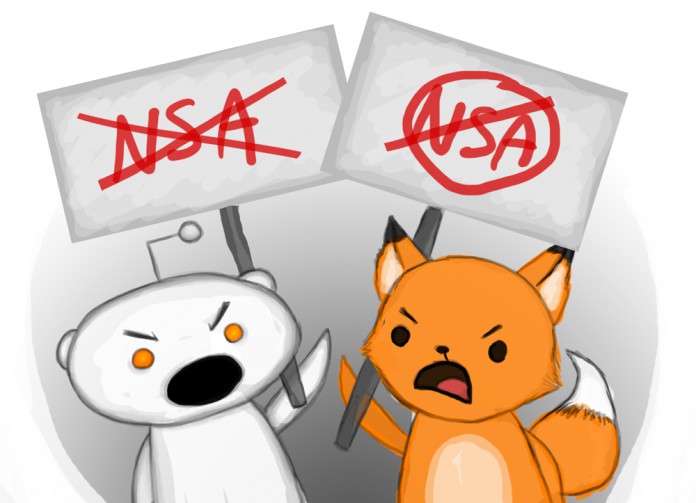 Dubbed “The Day We Fight Back,” Feb. 11 marks the day Reddit, Free Press, Mozilla, the Electronic Frontier Foundation, WordPress, Demand Progress, and several other websites and organizations will display large banners providing lawmakers’ contact information and encouraging users to speak out against the National Security Agency’s Internet surveillance programs. The Day We Fight Back will also honor the two-year anniversary of the protests that brought down the Stop Online Piracy Act (SOPA) and the Protect IP Act (PIPA), where Reddit, Wikipedia, and several other sites blacked out much of their content in protest.

According to NPR, the NSA monitors phone calls as well as emails, instant messages, Facebook posts, contact lists, and raw Internet traffic. While not strictly illegal, the NSA’s actions are arguably unconstitutional, and there is currently no evidence that the NSA is “spying” on Americans without a valid court order or search warrant. According to whistleblower Edward Snowden, the NSA has the means to circumvent most Internet encryption methods, meaning that protecting your data from the NSA is almost impossible.

On Jan. 11, 2013, Aaron Swartz, faced with 35 years in prison and thousands of dollars in fines, committed suicide. Swartz, the co-founder of Demand Progress and developer of the RSS feed, Creative Commons, and Infogami, was arrested in 2011 for computer fraud and illegally obtaining documents from protected computers, according to CNN. Later, he was indicted for apparently stealing millions of online documents from the Massachusetts Institute of Technology, to which he pleaded not guilty. The Day We Fight Back also serves to honor Swartz’s memory, according to Roy Singham, chairman of ThoughtWorks, where Swartz worked before his death.

“Aaron showed us that being a technologist in the 21st century means taking action to prevent technology from being turned against public interest,” said Singham in an official statement, according to the official site of The Day We Fight Back. “The time is now for the global tribe of technologists to rise up together and defeat mass surveillance.”

The Day We Fight Back uses the protests against SOPA and PIPA as a precedent, and protestors strive for a similar level of success. However, large websites such as Wikipedia and Google were on the front lines of the previous campaign. The Day We Fight Back lacks a similar level of support; Reddit, WordPress, and 4chan are not nearly as prominent as Wikipedia and Google, nor are they used by as wide an audience. As a result, The Day We Fight Back may not be as successful as the protests against SOPA and PIPA were, despite the fact that today’s protesters are expecting similar success.

“I think that all digital protests – about online rights – are now compared to the SOPA effort,” said David Segal, executive director of Demand Progress. “That set a standard to live up to which might literally never be beaten, and led to the development of new alliances and tactics which are very much in play here.”