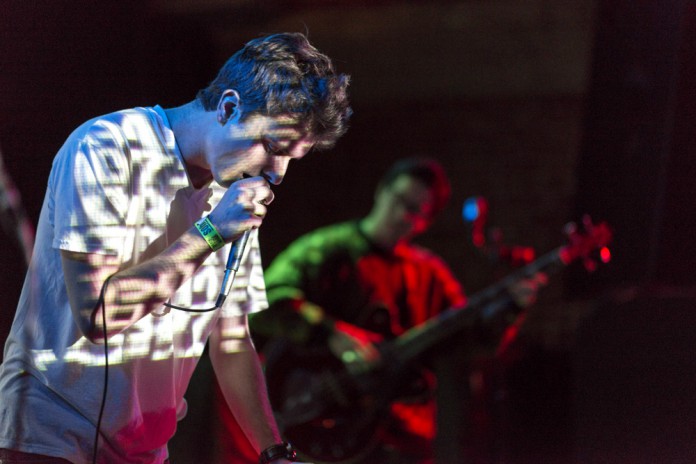 Santa Barbara residents were treated to a night of soulful yet hard-hitting bass-driven beats on Thursday, Jan. 16, at SOhO. The sold-out crowd, composed mainly of college students, welcomed the San Franciscan beat-smith Giraffage, who performed a live set with his new visual show. Presenting this lively night of music were Santa Barbara’s own Speak Volumes and We The Beat, two recently launched music websites.

Speak Volumes and We The Beat bode very well for the young, college-aged residents of Santa Barbara. Not only are they booking solid headlining acts that carry an immense amount of popularity while remaining tasteful in a break from the repetitive “dirty” bass sounds, but they are also placing an emphasis on finding and publicizing young, local artists—exposing the domestic music culture of Santa Barbara and pulling talent directly from its roots. These two locally driven organizations booked two University of California, Santa Barbara students as the openers for the night: Cub’b and Underbelly.

The night began with a mood-setting, back-to-back DJ set from UCSB students Alex Ho and Dylan Chase. These two continued to keep the vibe flowing in between acts, as well as after Giraffage himself had left the stage.

Cub’b, UCSB fourth-year Chris Cubbison, officially opened the event first. His distorted electronic sounds were very sample heavy, pulling audio clips from various sources. Cub’b provided his own vocals over his tracks, using an echo-riddled filter to create an eerie sound that perfectly matched his lo-fi, analog-produced beats. His performance strongly emphasized its live aspect, as Cub’b created many of his sounds on the spot to accompany the layering of his own vocals. This led him to often pause between songs after playing them through in their entirety, making his set truly that of a live instrument performance.

Second to perform was Underbelly. UCSB first-year Timmy Linetsky put forth a genre-bending performance that was a combination of both a live act and a DJ set. His song selection was packed full of classic R&B flips, including remixes of Aaliyah’s “Are You That Somebody?,” Mariah Carey’s “Touch My Body,” Usher’s “Climax,” and the Internet’s “Dontcha.”

In addition to blending songs through Ableton Live, Underbelly incorporated the piano, an instrument he has been playing since the age of 7. Throughout his set he would trigger loops using his keyboard, therefore allowing him to layer several loops on the spot over the tracks he played. The crowd responded extremely well to the live aspect of his performance coupled with his song choice, which started at a higher bpm and eventually transitioned down to a crowd-friendly, four-by-four tempo.

Finally, the man of the hour Giraffage stepped up to perform for the already packed and pumped crowd of SOhO. His performance utilized his new visual show, incorporating images of optical illusions, static-laden screens, and various images of cats and pizza, which he himself described as “random.”

His set progressed very well—an aspect of his performances that he has stated he pays great attention to. It started on a somewhat mellow note, but built up to a strong climax, which he was able to ride through to the end. Early on in his set he played many synth-heavy classics from his repertoire, including his popular remix of The Dream’s “Shawty Is Da Sh*!” and his remix of the French house classic “Music Sounds Better With You,” by Stardust. About halfway through his set he began to play many of his heavier, more bass-driven material, including the popular song “Money” from his latest album “Needs,” which was released February of last year.

Giraffage, 23-year-old Charlie Yin, calls his style of sample-based music “dream pop.” He rose to popularity in 2011 and has exponentially grown in appeal since then, allowing him to tour across the United States and Europe as a headliner with the likes of XXYYXX, Teen Daze, and Slow Magic.

Giraffage was able to play a very sample-driven set that had the crowd singing along to dreamy and melodic remixes, ranging from classic R&B and house music to contemporary artists like Justin Bieber and Miley Cyrus. Although this may seem like an odd clash of musical tastes, Giraffage was able to pull off such an eclectic set in a way that only a musician of his caliber would be able to.