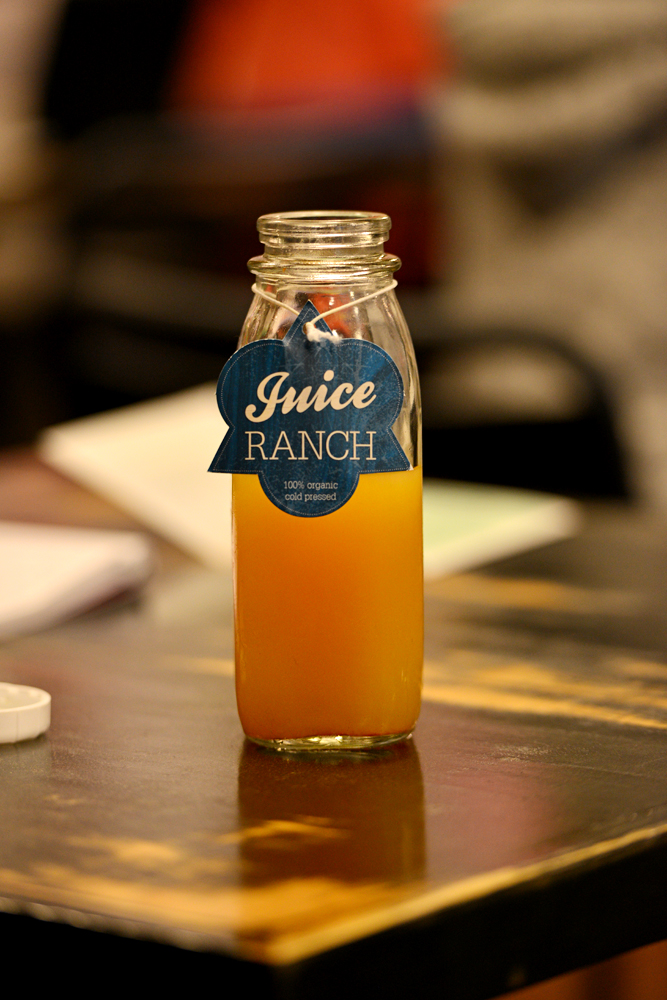 If you venture into Crushcakes & Café on Trigo Road and turn to the left, you will notice that a section of it has been transformed into an unimposing booth under the label Juice Ranch. Peruse the menu and you will be greeted by quirky juice names like “Dandy Liver” and “Love Potion,” each followed by an uncommonly minimal list of ingredients. Not entirely confident in my knowledge of unconventional juices, and this being my first visit, I opted for the cashier’s recommendation of “Johnny 5 Alive” (apple, lemon, ginger, and cayenne). The drink cost $8, along with a $2 deposit–for its glass bottle container–that will be reimbursed on my second visit, as long as I bring the bottle.

I sipped on my concoction while waiting at a table for Juice Ranch co-owner Scott Walker, who had graciously agreed to meet me for an interview. The drink tasted pleasantly explosive; the spicy cayenne asserted its presence, but not excessively so, collaborating with the other three ingredients to create a harmonious sensory experience. The glass bottle somehow added a certain authenticity; this, I felt, was how juice should always be consumed. As I was about to find out from Walker, glass bottles actually play a highly specific role in the Juice Ranch creative structure, and, like every other aspect of the company, hold implications that extend beyond the refreshing taste of their contents.

Soon after my first sip, Walker took the seat across from me and eagerly dived into discussing his business, a word that, judging by the enthusiasm with which he relayed to me all things Juice Ranch related, does not accurately convey his feelings for it–“lifestyle” would be more fitting. He began with the company’s history, which is rather romantic. An avid environmental activist, Scott experienced an “ah-ha!” moment when his girlfriend and fellow Gaucho alumni Erin Gomez introduced him to the concept of cleansing the body. Out of this “perfect synergy” of passions, Juice Ranch was born, producing tasty drinks for the Santa Barbara community out of carefully balanced ingredients in a maximally nutritious and environmentally conscious fashion.

Walker and Gomez celebrated their brainchild’s one-year anniversary on Jan. 2, a year that witnessed Juice Ranch’s expansion from the original Santa Barbara location into Isla Vista and Westlake Village. However, Juice Ranch is committed to remaining small–a unique aspect of a truly sustainable business. The company strives to sustain the local food scene in Santa Barbara, which begins with the neighboring farmers, who provide 90 percent of Juice Ranch ingredients (as Walker noted matter-of-factly, you just can’t cultivate coconuts in California).

These ingredients, unlike those that comprise wholesale products, are not subjected to high pressure or pasteurization. These processes, while extending a product’s shelf life, eliminate its “good” bacteria along with the “bad,” the former of which plays a vital role in rejuvenating our bodies. Furthermore, a detox diet, as Walker explained, purges the dangerous toxins that accumulate internally in the industrial food consumer. It also reserves the energy normally spent on digestion for our immune systems and other important bodily functions. Walker noted that these cleanses are especially important in an alcohol-fueled community like Isla Vista’s–a community he admitted he was once very much a part of, having lived on Del Playa for four years.

“We think we’re invincible, but at some point the luxury of youth fades and we need to start to care about the nutritional fuel we consume. Better to start now so we don’t have to pay for it later,” said Walker.

We continued to discuss everything from Juice Ranch’s indulgence in “potty talk” (see Squatty Potty on YouTube), to coffee enemas administered by Walker’s friend Ninaya Strandberg’s company Healing Journeys, to the multiple advantages of the glass bottle. The advantages of a glass bottle include sustainability, a lack of toxins to leak into its contents (as opposed to its plastic counterpart), and its contribution to taste.

Following the interview, Walker lead me outside to show me what he calls the future of Juice Ranch—Aquaponics, a mini aquarium-greenhouse on display in the Crushcakes wall. The process is simple: through a system of tubes, nitrate from the fish waste nourishes the plants, which return bacteria-free water to the aquarium, another neat example of cyclical sustainability.

Check it out if you get the chance—not that you’ll need external motivation to visit Juice Ranch once you’ve tasted their product. The juice possesses a vital, real-food quality that can only be attributed to their conscious conduction of business. Incorporating something as tasty as, say, “Johnny 5 Alive” into my nutritional fuel doesn’t seem too demanding. I’m already craving a refill.

Famed Economist to Give Lecture at Corwin Pavilion by Claire Wei