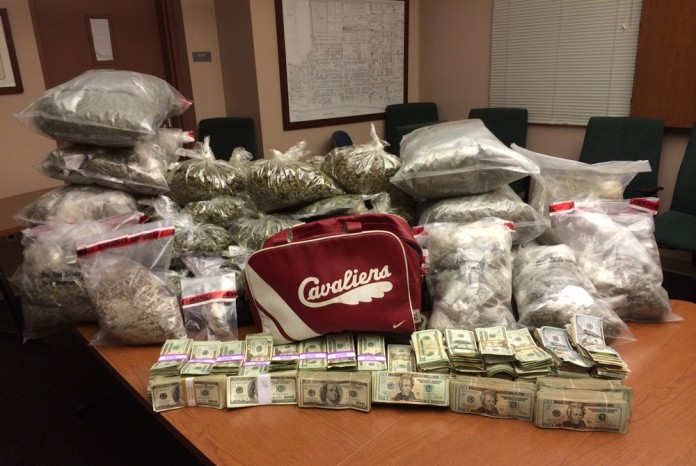 During the early morning of Friday, Jan. 17, Santa Barbara County Sheriff’s Deputies and University of California Santa Barbara Police Department Officers pulled over 25-year-old Julius Perdomo on the 6500 block of Del Playa Drive for driving with amplified music, a violation of vehicle code 27007.

What began as a cursory traffic stop led to the discovery of almost one pound of marijuana in Perdomo’s vehicle and evidence “which indicated he was also selling narcotics,” according to a press release from Santa Barbara Sheriff’s Office Public Information Officer Kelly Hoover. Perdomo was arrested at the scene and transferred to Santa Barbara County Jail.

According to the news release, the initial investigation of Perdomo revealed that he lived with his girlfriend, 23-year-old Sarah Pet. Local officers obtained and then served a warrant at Perdomo’s residence, on the 700 block of Camino del Sur, “several hours later.”

A search of the home uncovered a trove of narcotics: 58 pounds of “processed marijuana,” approximately one pound of psilocybin mushrooms, and 42 grams of concentrated cannabis. An estimated street value—at $1,500 per pound of marijuana, $200 an ounce of mushrooms, and $50 per gram of concentrate—comes to roughly $92,000. This total can vary, however, based upon both the quality of the product and wholesale prices.

Evidence was also found at the residence “indicating that Pet was involved with selling narcotics.” Though Pet was subsequently arrested, the press release states she “was released on her own recognizance pending her court date.” Perdomo is currently being held in police custody on $30,000 bail. Perdomo and Pet were booked on charges of criminal conspiracy, and the possession of both marijuana and psilocybin mushrooms with intent to sell.

Hoover explained that “processed marijuana” refers to “the bud that grows on the plant and is smoked.” This indicates that the marijuana buds had been previously stripped from their stalks and shed of their leafy trichomes in preparation for sale, perhaps lending credence to the conspiracy to sell charge leveled upon Perdomo and Pet.

A press photo of the confiscated narcotics revealed black Sharpie labels on a few of the evidence bags, indicating where in the residence the drugs were discovered. Three separate containers of pot carry the following respective designations—“From White Trash Bags,” “From Blue [indecipherable] Joe’s Cooler,” and “BLK [indecipherable] from Bedroom.”

Also buried in the narcotics stockpile is a maroon Nike Cavaliers sports bag. Stacks of cash, in various denominations, front the drugs and the Cavaliers duffel. Some have currency straps denoting $2,000, $4,000 and $10,000.

Sheriff’s Deputies also discovered $17,000 in cash and two safety deposit keys at Perdomo’s residence. Hoover said a follow-up search warrant “was served on the safe deposit boxes around 5 P.M. on January 17th,” and an additional $93,000 in cash was seized.

“The safety deposit boxes were held at several banks in Goleta,” Hoover continued.

On Tuesday, Jan. 21, Sheriff’s Deputies expropriated $16,000 from Perdomo and Pet’s bank accounts from another search warrant, bringing the total cash seizure to $127,000 during the investigation.

AS Election Results and Takeaways