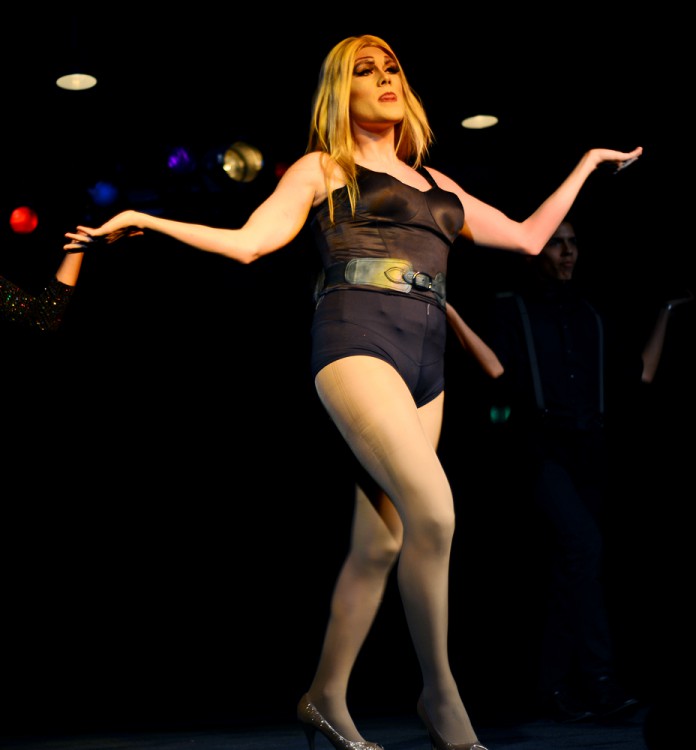 Winter Wonder Drag, presented by University of California, Santa Barbara’s Queer Student Union, took place in the Hub last Thursday, Jan. 16, in front of a crowd of approximately 325 students. Before the show began, the excitement in the room was palpable. The air was filled with chatter as the crowd craned their necks to see the performers’ arrivals. Then, as 9 p.m. passed, the lights dimmed. Wearing a silky robe and sparkly pumps, Avery Daniels strutted onstage. The applause was deafening as she circulated the room, and the dollar bills began to fly. Calls of “I love you!” and “you’re hot!” echoed from the audience throughout the show.

“I don’t care what your gender is, just do it fabulously,” cooed Daniels. “I want you to leave here loving yourself more. You are fabulous!”

Daniels was a hostess, comedienne, and performer, as well as one of the organizers of the second annual Winter Wonder Drag. Over the course of the night, Daniels changed costumes over a half a dozen times. The only constants in her appearance onstage were a pair of sky-high heels, her mile-long legs, and, of course, her shiny blonde hair, which she tossed and fluffed proudly as she worked the crowd.

Amazingly, Winter Wonder Drag never had a full run-through rehearsal, though the event has been months in the making. Each performer who came on stage was a professional who filled the stage with diva attitude.

Performing to songs by Beyonce, Shakira, Christina Aguilera, and originals by UCSB student Nick Newton, the queens of the night were Daniels, Isis Magiq’elle, Selma Botti, Azara Sapphira, and Athena Lunar, two of whom are UCSB’s very own students.

“Everybody here is very friendly and the community is very supportive,” she said. “It’s such a nice environment, especially at the beginning of the quarter.” Lopez’s favorite number was one of the earlier comedic routines in the show, in which performer Selma walked primly around the stage in a schoolgirl costume while lip-synching to a song about anything but(t).

The event raised $1,795 for UCSB’s QSU. All proceeds collected by QSU go to sending students to queer conferences.

“This year we’re sending a delegation of 30 people to University of Pacific LGBTQ conference in Stockton at the end of week seven,” said Chris Buck, one of the event’s organizer and a second-year sociology and financial math double major. These conferences include workshops and keynote speakers, as well as spaces to discuss queer ideas and expand queer knowledge.

“Drag is a very special thing to the queer community. It’s one of our artistic outlets,” said Buck. “When we have our drag shows, you see how loving and close everyone is. It’s one of the few places to really express yourself.”

Backstage after the show, Daniels is as charming and engaging as she was on stage. She smiles and relaxes, basking in the love, positivity, and support that is so very present at drag shows.

“When I was growing up, my femininity was looked down upon,” said Daniels. “To be 21 and be feminine and be praised is such an amazing feeling for me.”

Avery Daniels is the stage name for UCSB student Nick Newton, a third-year psychology major. “Avery Daniels,” she sings during my interview, each syllable lovingly annunciated. Daniels explains that she chose her name because she wanted her drag persona to have a lovely name that sounded like music as it was said: a name that you always write in cursive.

Daniels has only been performing in drag for two years. One queen she admires greatly is Isis Magiq’elle, one of her fellow performers at Winter Wonder Drag.

“As a baby drag queen I get nervous, so to see a queen who is so confident in her skin, I love it,” said Avery.

Keep an eye out for more drag performances featuring UCSB students during Pride Week next quarter.