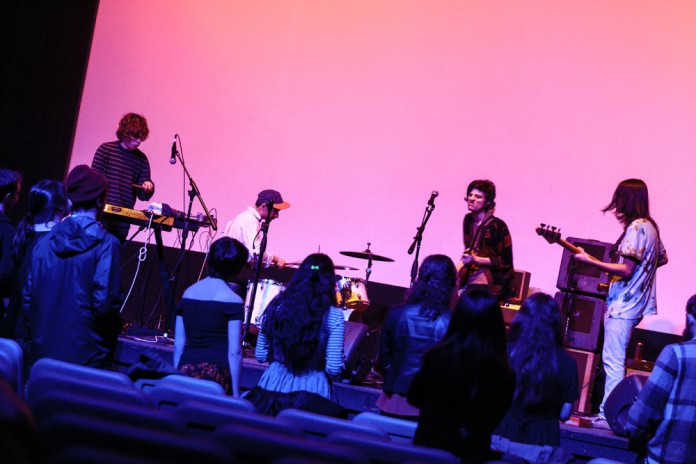 Heavy guitar riffs, intricate drumming, and clashing cymbals reverberated throughout IV Theater on Jan. 10, 2014, as The Trashberries played to an intimate group of students and locals.

The event was hosted by Magic Lantern and Cool Summer Records, and started off with Dub Thompson, the impressionist rock band from Agoura Hills, opening for a crowd that gathered in front of the stage. They played their “punky,” ear-splittingly loud tunes for half an hour, which was the perfect welcome for an equally raucous main show.

The Trashberries duo, both Santa Barbara locals, opened up with their original, “Rebecca,” which, like the rest of their songs, was solely composed of thunderous, hectic drum-work and frenzied guitar riffs.

“Neither of us wants to sing,” said guitarist, Chad Arnett. “So we just decided to not have vocals and make up for it with a lot of reverb, drum hits, and cymbals.”

Despite the lack of vocals, The Trashberries pumped up the crowd with cacophonous, thrashing melodies and skillful rhythms. They completed their set with their original song, “Gueuze Partyy,” named after the duo’s favorite Belgian beer.

When asked what genres their music falls under, the duo could only describe it as “yé-yé violence—surf-y, but aggressive.”

“We have a song called ‘Blood and Puke and Shit (How Can I Dance to This),’” said Arnett. “I think that describes us pretty well. We’re not kidding, by the way.”

“Our music is like really cute but really awful at the same time,” added drummer, Paul Rey.

Arnett and Rey first met as employees of Telegraph Brewing, a brewery in Santa Barbara, and formed the band, Hesse, with two other musicians. When their bandmates moved away, Arnett and Rey continued practicing together after work; and thus, The Trashberries was born. The duo performed their first show over a year ago in December of 2012.

The Trashberries’ music is largely influenced by their favorite artists: Damn Laser Vampires, The Mummies, Trash Kit, and Ghost Ease. The duo is constantly drawing inspiration from different aspects of each band’s work, including the passion and enthusiasm evident in their music.

“These bands, whatever direction or focus they’re into, they’re passionate and really into it,” said Rey.

Arnett and Rey’s loud, zealous performances can be partially attributed to the fact that they’ve both grown up in Santa Barbara.

“There’s a lot of frustration in our music that has to do with our surrounding cultural environment in Santa Barbara,” said Rey.

The Trashberries have already accomplished much in the music industry, having collaborated with Brian Burge, a sound and tech engineer, as well as Cool Summer Records. They’ve even met Jonathan Rado of Foxygen, a well-known indie rock band. The duo said the most exciting thing that’s happened so far was when their favorite band, Damn Laser Vampires, liked and commented on one of their songs on SoundCloud. When asked about their future aspirations, The Trashberries responded optimistically.

“We want to play with cool bands and drink as much Gueuze as possible,” said Arnett.

You can connect with the Trashberries on their Facebook page, www.facebook.com/trashberries, and listen to their music at www.trashberries.bandcamp.com.