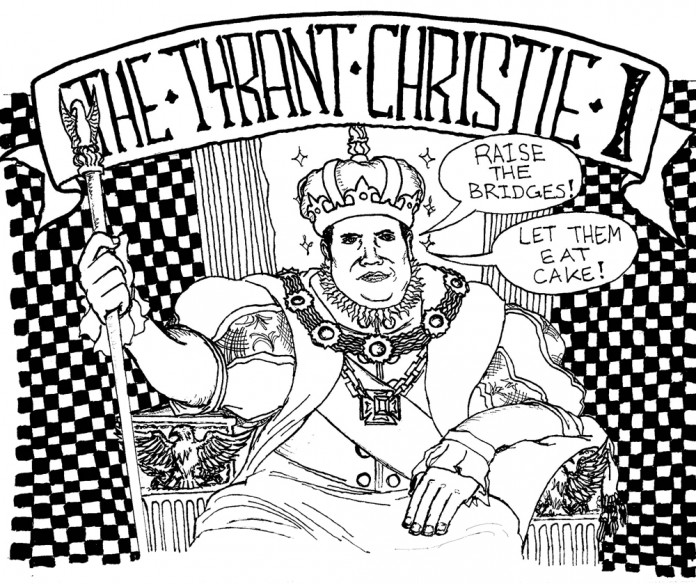 One word: “bridgegate.” Actually, it’s two words shoved together in a portmanteau. Before you ask, let me answer your burning question: Yes, apparently it does matter. “A governor’s staff creating traffic jams to spite political enemies, an event which said governor had to hold a two-hour long press need not be repeatedly brought to our attention,” said no prominent news outlet, ever.

So here you are again, reading another newspaper’s thoughts on the most important issue in America—Chris Christie and the scandal known as Bridgegate. Why should you keep reading despite your initial eye roll? Because, by the end of the time you have devoted to this extra-curricular reading, you will ascertain the importance and meaning of this Chris Christie kerfuffle.

Let us begin with a brief summary of the events that took place on Sept. 9, 2013. Open with bumper-to-bumper traffic, sweltering summer heat, and through the symphony of car horns and Joisey yowls, the faint whimpering of a young child is heard, as he reluctantly accepts his tardiness on the first day of school. “There’s some sort of traffic study going on,” a father says to his son in an attempt to soothe both their emotional wounds.

But the plot thickened last week on Jan. 8 when private emails were leaked to the press; they disclosed that the interminable traffic jam was not, in fact, a city study but political retribution.

Fort Lee mayor, Democrat Mark Sokolich, refused to endorse Christie’s reelection bid this past fall, and as punishment, Christie Deputy Bridget Anne Kelly and Port Authority executive David Wildstein conspired to close two of the three access lanes connecting Fort Lee to the George Washington bridge. Did Christie himself make the order? “This completely inappropriate and sanctioned conduct was made without my knowledge,” stated Christie in a public statement last week. Despite his assurances, the public has had cause for doubt as the incident goes hand and hand with Christie’s tough guy character.

Here’s what matters; the potential Republican forerunner for the 2016 presidential elections has now allegedly jeopardized not only himself as a candidate, but also the entire party as a competitor with Hilary Clinton. “Bridgegate is a Disaster for the Republican Party” is the title of an article in The Atlantic. Amanda Terkel, a reporter at Yahoo, wrote that “the scandal that has engulfed his administration in the past week [is] hard to ignore.” Karen Tumulty of The Washington Post speculated that “whether the Governor will be able to move beyond the strife” is in question. Sally Kohn of The Daily Beast said, “The Bridgegate story now clearly and decisively is a real politically motivated scandal.” It is clear that what most media voices have found is that Bridgegate, regardless of culpability, has and will have a damming effect on Governor Chris Christie and perhaps the Republican party overall.

However, in some cases, the snafu has created a unifying effect for the Republican Party—lassoing those who were previously not Christie’s biggest fans. Republicans came to Christie’s side asserting that the governor should be praised for his willingness to cooperate with the press. “I think he took the bull by the horns, held people accountable, fired people,” Illinois Rep. Adam Kinzinger said on ABC’s “This Week With George Stephanopoulos.” Republican National Committee Chairman Reince Priebus said, “He stood there for 111 minutes in an open dialogue with the press. Now, only if Barack Obama and Hillary Clinton would give us 111 seconds of that, would we find out some things we want to find out about Obamacare, Benghazi, the IRS.” Christie’s “scandal” and his candid handling of it may have actually solidified Republican pride.

Is this a good thing? Should political unification stem from scandals? Ultimately, someone that Christie hired made a terribly immature decision that unveiled the potential for politicians (or those associated with them) to aggressively abuse power.

Whether you feel that the Bridgegate scandal was Christie digging his own (and his party’s) grave, or that Bridgegate has effectively showcased Christie’s cool composure under pressure, I ask that you not fall into the trap of political polarization. This scandal has erupted a newfound sense of name-calling, finger pointing, and deepened the line that has been drawn in the sand between the Republican Party and the Democratic Party. The final takeaway: note that the scandal itself is essentially bologna, but how you evaluate the information is what matters. Don’t roll your eyes when you open the paper and the word Bridgegate stares at you from the headlines—read up and form your own opinion.