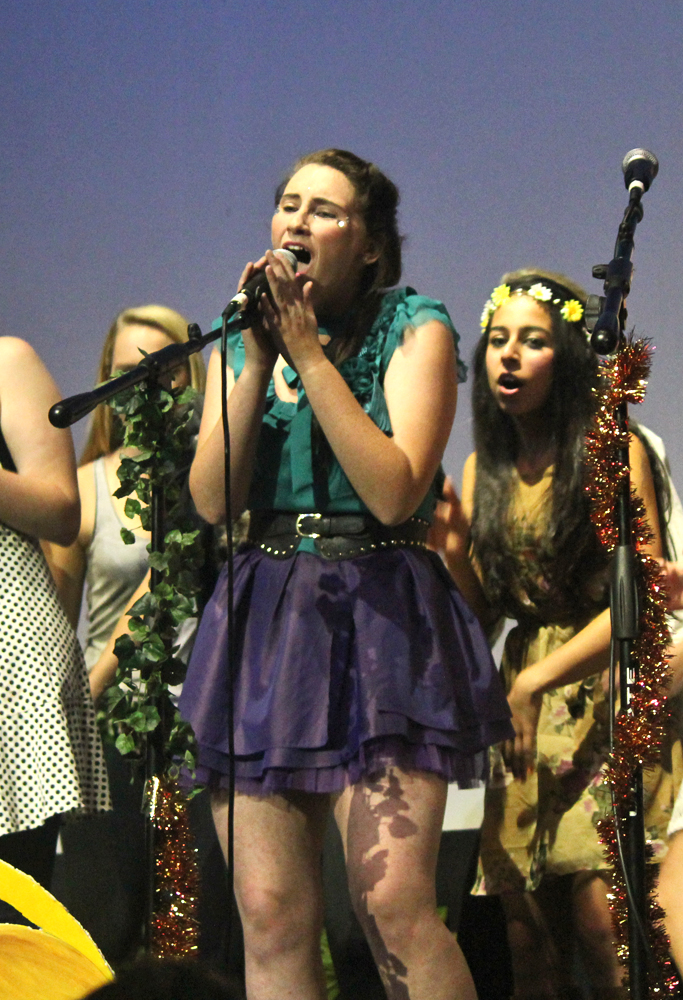 VocalMotion, the only all-female a cappella group at University of California, Santa Barbara, held their first concert of the year this past weekend on Saturday, Nov. 16, at Isla Vista Theater 1. The show was presented in the theme of “The Hunger Games” in tribute to the second installment of the movie series “The Hunger Games: Catching Fire.” Sponsored by Associated Students and hosted by Improvability, the event also featured acts by the Naked Voices and Brothas From Otha Mothas, allowing the audience to see what potential the group and their opening acts had in store for the upcoming year.

Before any singing occurred, two members of UCSB’s Improvability group, Mason Sperling and Matt Meyer, were introduced as the hosts who would entertain the crowd throughout the night. Once the members of the audience were settled, the hosts introduced two a cappella groups that would open for VocalMotion.

The first opening act was UCSB’s co-ed a cappella group Naked Voices. The group started the night refreshingly, hinting at what the audience could expect for the rest of the evening. Their set list, made up of various songs that balanced the different octaves of the group’s male and female voices, got the crowd pumped up for the next act. Following Naked Voices was the all-male a cappella group, Brothas From Otha Mothas (or BFOM), who demonstrated with their performance that a group’s unique style can still fall within the a cappella world.

The transition from Naked Voices to BFOM was smooth, for the host Sperling took on a solo, singing Louis Armstrong’s “What a Wonderful World.” BFOM then accompanied Hunter Schwarz’s solo of Death Cab for Cutie’s “I Will Follow You Into the Dark” and Mike Newsom’s solo of The Temptation’s “My Girl,” enchanting the audience with their vocal arrangements and powerful voices. Notably, BFOM was able to mimic sounds of trumpets and chirping birds, allowing the audience to see their playful style of a cappella.

After the opening acts, the ladies of VocalMotions ran onto the stage to prepare for their set. Each member was dressed in a different outfit that represented a character in “The Hunger Games.” One side of the stage was decorated with vines clinging onto the microphones, representing the poor districts of Panem, and the other half of the stage was adorned with golden garlands, representing the luxurious Capitol of Panem.

At the beginning of their performance, the girls began with the trademark three-note whistle from “The Hunger Games” and slyly transitioned into Lorde’s “Royals.” Vice President and Music Director of the group Emily Duncan carried the tune of the three notes without failing to miss a beat. Their eclectic set list also consisted of songs by Florence and The Machine, Eminem, Olly Murs, Bruno Mars, Amy Winehouse, and Salt N’ Pepa.

The 14 members of the group are separated into the groups VoVets and VoBabies. For their first concert, they gave “VoBaby” Saiba Singh the opportunity to sing “Runaway Baby” by Bruno Mars, which allowed Singh to bring the atmosphere to an energetic climax as she sassily sang the song with a bit of funk—and the audience responded approvingly. The dynamics among the members were very intimate throughout the performance; they supported one another in every song, allowing the featured vocalists to shine through the group’s collective voice. The performance by VocalMotion and their opening acts was a success, and there is no doubt that the group and their future events will only continue to flourish.