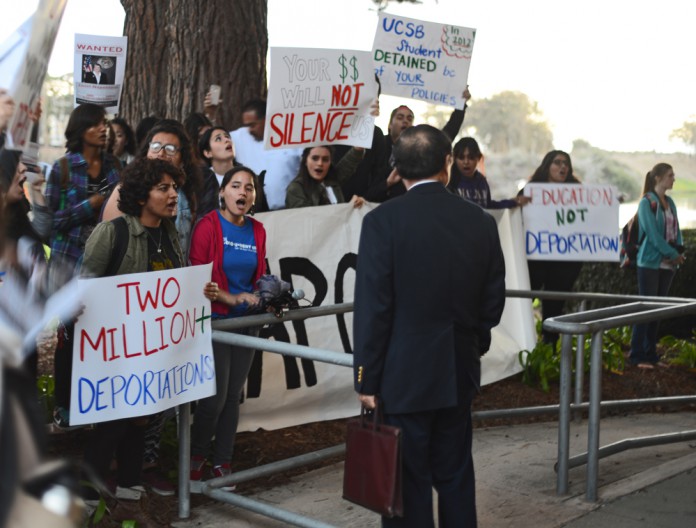 Activist fervor from those against the appointment of University of California President Janet Napolitano is spreading through the campus like wildfire. On Thursday, Nov. 21, an impassioned group of protesters convened at the Faculty Club to mark Napolitano’s first visit to the University of California, Santa Barbara campus. The following morning, Napolitano conferred with a 40-student delegation at the Mosher Alumni House to discuss student grievances and the future of the university system.

Napolitano, former head of the United States Department of Homeland Security, has been denounced by students from all 10 campuses for her role in the deportation of undocumented immigrants and the lack of transparency surrounding her selection as the UC president.

Some students at the protest speculated that her presidency serves as a political device to draw increased funding and exposure to the university system. With her close ties to President Obama, the federal administration, and state Democrats, they believed that her governmental influence may prove more influential than her lack of educational expertise.

For some students, Napolitano’s appointment is representative of the deteriorating philosophy and standards of the UC system.

“Today is about more than just Napolitano,” said fourth-year global studies major Norma Orozco. “It’s about the UC system as a whole and how fractured it is, how broken it is. It’s about the lack of control and the lack of power that students have.”

On Thursday evening, the students—with various picket signs and a large banner emblazoned with “Napolita-NO”—paced down from the Student Resources Building to the Faculty Club where Napolitano was reportedly attending a reception gala. Acrimonious chants of “No Justice! No Peace!” and “Hey Hey, Ho Ho, Napolitano Has Got to Go!” brought the crowd in direct contact with UC Police Officers posted along the different entrances to the building.

Professor of Chicano Studies Ralph Armbruster-Sandoval, who provided a faculty presence at the largely student-dominated protest, contextualized the broad objections of many within the UC system.

“The grievances are multiple: immigration, worker rights, healthcare for the faculty, tuition,” Armbruster-Sandoval said. “I think every constituency in the UC system, including at UCSB specifically, for years now has been under the gun.”

“I want to direct a lot of feeling I have towards her,” Salazar said. “A lot of people here have been directly affected by her policies and by her actions and those people weren’t acknowledged.”

Students expressed indignation that Friday’s student meeting would not be fully representative of the student population. They accused Napolitano of ignoring student voices, but calls for a public forum never materialized into a reality.

Armistead, who spoke to the crowd as a mouthpiece for the Chancellor, related that this would be the largest student meeting Napolitano has had thus far.

“It was very intentional the students I suggested we invite, I was really clear that I wasn’t worried if they were loud or had big opinions,” Armistead said. “As frustrated as your are that there isn’t a forum, I just want you to know that we worked really hard that voices would be heard.”

Yang seized the moment to congratulate the magnetic crowd.

“The hearing is the first step,” Yang said. “You’ve made a tremendous effort today. I appreciate it.”

Forty student constituents convened the next morning at the Mosher Alumni House. After a round of introductions, Napolitano offered the forum opening remarks.

“The point of our time together this morning is: a) for you to get to know me a little bit but also for me to hear from you…what your concerns are, what you would like to see the Office of the President of the system…do to improve lives for our students, who are, after all, the reason we are all here,” Napolitano said.

A broad range of issues, such as retention, inadequate teaching assistant pay, and the role of online education, were discussed. The forum gave Napolitano a platform to describe her vision for the university system and provided students with an opportunity to air their public grievances about Napolitano’s past decisions, rising tuition, and campus policing.

“The strength of California, and the reason California is going to thrive in the next decades, is based on the strength of the public University system,” Napolitano said about her recent proposal at the Nov. 13 UC Regents meeting. “I have asked that tuition be frozen for the next year to enable us to really look at tuition models that limit the amount but also the volatility of tuition going up and down…”

Napolitano suggested her intention to change the financial perception of the UC system and broaden pipelines at the high school and community college level.

“If you come from a family that makes $80,000 or less you qualify for the Blue & Gold Opportunity Plan, which is a tuition free plan,” Napolitano said. “There is a wealth of things we need to do to reach out…”

In an effort to reach out to her opposition, Napolitano also explained her plan “to [allocate] $5 million” to undocumented students. The meeting was not without a dose of controversy, however.

A few student commentators charged Napolitano with earning a reputation for prejudice, citing the targeting of colored students in her past occupation as head of the Department of Homeland Security.

“I would say that I haven’t built that reputation; that may be how you perceive it, but that’s not what I’ve done,” Napolitano responded. “I will say, and let’s be frank about it, some students are upset that I ran the Department of Homeland Security.”

Napolitano also refused to make a substantial comment on a student-posed question about the criminalization of black and brown bodies or the University’s investment in the military and prison industrial complexes.

“I think your question deserves a longer answer than I’m able to give in this forum, but I disagree with a lot of the premises of your question,” she said.

Touching on the UC workers’ strike on Wednesday, Nov. 20, Napolitano seemed unwilling to offer a solution, suggesting that the protest effort “doesn’t help anybody.”

“The offer is at the table, but this is not the setting for it,” Napolitano said. “We are prepared to work it out and go through all of it, but we can’t work it out without your leadership sitting down with us and so far they’ve been reluctant to do that.”

“I feel that she was very strategic in the way that she answered our questions,” Gonzalez said. “I think that she came in with the mindset of defending her diplomatic image. I was unsatisfied with her from the very beginning…[but] she is the President, we’re just going to have to work with that.”

All in all, Napolitano is being held to her personal philosophical standard on University advocacy.

“Campuses are places for the free flow of ideas and positions,” she said, “and they ought to be places where opposing positions are respected.”