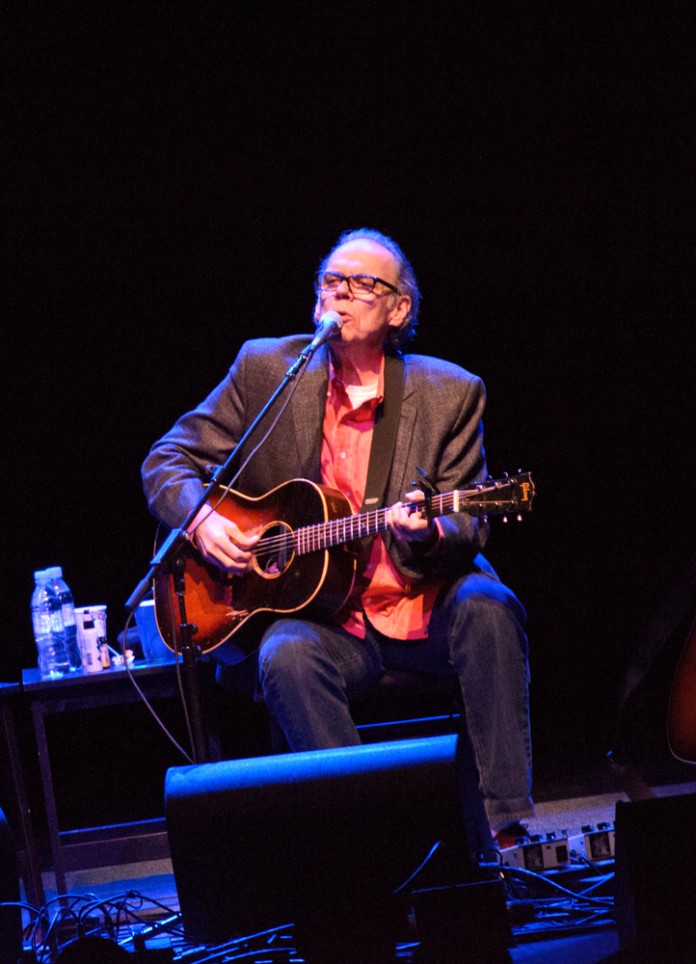 All quarter long, the University of California, Santa Barbara’s Arts & Lecture series has put on great shows for the school and local community, and this past Tuesday night marked a special treat for all who had the pleasure of attending the show at Campbell Hall. In what seemed more like two great country musicians just hanging out than a concert, Lyle Lovett and John Hiatt demonstrated the musical chops and relaxed storytelling sensibilities that have made them two of the most respected musicians of their genre. Labeled “An Acoustic Evening with Lyle Lovett and John Hiatt,” this intimate event kept the audience enthralled, entertained, and laughing for hours.

With two careers that have combined to span more than 60 years and have spawned 36 albums, four Grammy awards, and countless performances, the two had more than enough exceptional songs to perform. Lovett and Hiatt spent the night playing some of their greatest hits in alternating fashion (with the other occasionally providing backup vocals or adding a lively guitar riff), including some of their most popular songs like “If I Had a Boat,” “Master of Disaster,” She’s No Lady,” and “Thing Called Love.” The two brought their unique blend of humor, blues, and pure Americana to an adoring crowd. They were also joined by special guest, Grammy- and Oscar-winning singer-songwriter Ryan Bingham, who blew away the unsuspecting audience as well as Lovett and Hiatt with his heartbreaking and beautiful original songs.

But while the music was brilliant, the best part of the night was watching the performers themselves. They really made the audience feel at home, and despite my seat at J-26, these two transcendent musicians made me feel as if I were listening in on their jam session. Featuring only the duo and their guitars on stage, the performances were relaxed and carefree. At one point, Hiatt forgot every word after the first verse of “Across the Borderline,” and was forced to riff and scat along to the guitar accompaniment, as well as the muffled laughter of the audience and his partner on stage.

Lovett, sometimes known as the clown prince of country, and Hiatt, a consummate jokester in his own right, kept the audience entertained in between songs with humorous anecdotes of past shows, jokes one’s dad might tell, and the kind of playful ribbing that can only come after years of friendship and performing together. In a relaxed fashion, Lovett and Hiatt spoke of diverse topics such as their first show together, their times with the local color of Santa Barbara, and of a man who popped out his glass eye after what must have been a particularly moving performance of “One-Eyed Fiona.” It was with this kind of endearing comfort that made the night so much fun; everybody was relaxed and in the mood for a great time, and Lyle Lovett, John Hiatt, and Ryan Bingham delivered.