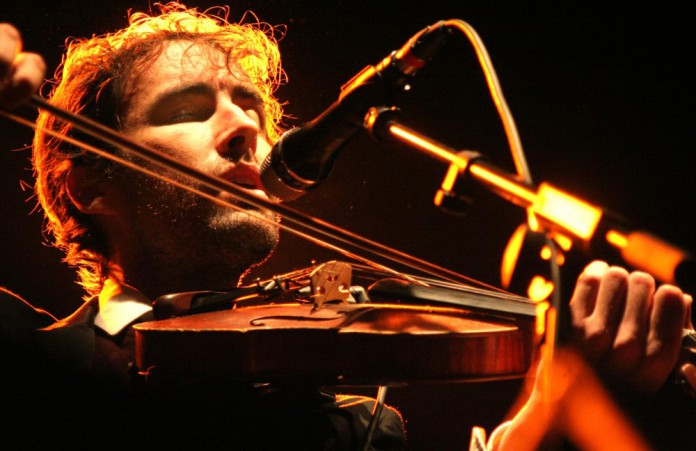 Touring his 2012 studio album “Hands of Glory” and latest EP “I Want to See Pulaski at Night,” the indie-folk rock artist Andrew Bird gave a stellar performance to a full house at Campbell Hall. In an effort that took two years to accomplish, University of California, Santa Barbara’s Arts & Lectures and KCRW 106.9 presented Andrew Bird and The Handsome Family on Thursday, Nov. 21.

The Handsome Family, made up of husband and wife Brett and Rennie Sparks along with drummer/multi-instrumentalist Mike Werner, opened the night with americana and alternative country tunes. Rennie, on banjo and acoustic bass guitar, opened the songs with quirky, humorous introductions. They first performed “The Bottomless Hole” and sang songs from their newest album “Wilderness,” including a song called “Woodpecker” about the 1980s Wisconsin window smasher Mary Sweeney. Reminiscent of Johnny Cash, Brett brought the haunting and sorrowful themes to life with his thundering voice and guitar, while Werner provided the steady backing drums and eccentric sounds. The Handsome Family was soon joined on stage by Andrew Bird himself.

After a brief welcome, Andrew Bird and The Handsome family performed a song about suicide, entitled “Weightless Again.” Bird’s harrowing violin added another dimension of sadness to the family’s sound. Bird seemed reluctant to sing with, only joining in for the vocals of “The Sad Milkman,” “My Sister’s Tiny Hands,” and “When That Helicopter Comes.”

Bird occasionally forgot the soulful lyrics he was singing, and after some apologizing and mumbling, the song went on with the help of fellow musicians and the encouraging chuckles of the audience. Bird later mentioned that he and The Handsome Family are old friends but that this was the first time that they had been onstage together.

“This was a really magical and fun night,” said Brett in an interview after the show. “We’ve known Andrew for a long, long time. Old friends from Chicago. Probably, I don’t even know, somewhere close to 15 to 20 years. We’ve worked with each other and toured together and finally played a long set with him.”

In regards to the improvisation on stage, Brett said, “We rehearsed about five minutes per song. There were some searching moments and nice interwoven moments… I had a really good time.”

After a short intermission, Bird went onstage for his solo performance. Bird was accompanied only by his violin, guitar, amplifiers, a double-horned phonograph, a sock monkey in a suit, and looping pedals. Beginning his set with instrumentals that sounded like raindrops, Bird opened with “Hole in the Ocean Floor,” and his whistling, violin, and loops combined the world of organic music with analog sound.

With that, Bird said he was pleased to meet us. He disclosed to the audience that he hadn’t planned on performing that last song, and that it was something subconscious. He said he was biking up the hills earlier and noticed Santa Barbara’s oil rigs.

“When the Gulf Oil Spill was happening, I was living in Venice for a little while, and I remember waking up in a cold sweat in the middle of the night, in a total panic, thinking that this was some kind of disaster that just kept on going and going and going..,” said Bird. “The ocean floor was bleeding and I felt like I could hear the hole.”

He also shared songs from past albums, including “Why?,” “Fake Palindromes,” “A Nervous Tic Motion of the Head to the Left,” “Give it Away,” “If I Needed You,” and “Three White Horses.” Bird also performed a song he said has yet to be put out on a record, even though he said that he performs it at almost every show. After the overwhelmingly emotional performance of “Why?,” he explained that the song was about his roommate in college who wanted desperately to be friends. Bird added that at times, the worst thing you can do to someone is absolutely nothing.

Bird also performed “Pulaski at Night,” a song off his most recent EP, “I Want to See Pulaski at Night.” Bird told the story behind the EP title, explaining that there is a road on the west side of Chicago named after Charles Pulaski, the revolutionary war general. He said a student visiting from Thailand wistfully said, out of nowhere, “I want to see Pulaski at night.”

“We thought that was really funny,” Bird said, “because you really don’t want to see Pulaski at night.” Although Bird was charmingly humorous, his performance of the song was breathtaking.

Bird closed the show whistling away to “Danse Caribe,” and after a standing ovation, he came back to the stage to perform two more songs. He sang a soulful, gospel-like song, repeating the lyrics “I’ve been redeemed,” “I’m going home,” and “you will never fear anymore.” All of Campbell Hall clapped to the beat, at which Bird remarked, “You got great timing—really.” Bird ended the night with what he claimed was his favorite song from The Handsome Family, “Don’t Be Scared.”

This sold-out event was a night of musical virtuosity, and Andrew Bird’s intimate, beautiful performance was a stunning experience.