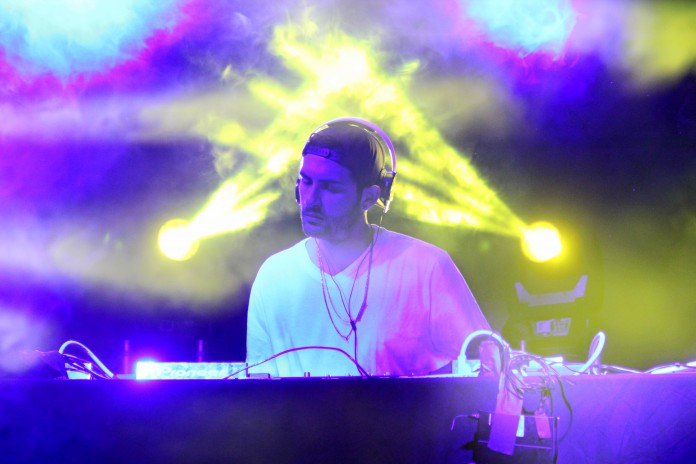 Just when the dubstep craze seemed to have simmered down, the University of California, Santa Barbara students begged to differ this past Friday night at the Welcome Back Concert. This annual concert, hosted by Associated Students Program Board, headlined dubstep artist Borgore and opened with the electronic dance trio Brass Knuckles. Stimulating electronic bass-lines reverberated throughout Storke Plaza as friendly new faces gathered to enjoy their first weekend here as UCSB students, and Borgore helped break the ice for freshmen and upperclassmen alike.

As the plaza began to fill with old and new faces, a Miami trio by the name of Brass Knuckles put on quite the show. Blasting classic electronic dance music beats and drops, Brass Knuckles seemed to please the crowd as the audience jumped up and down with their fists pumping in the air. This opening act set the atmosphere for what awaited the night as the eager crowd anticipated Borgore.

Asaf Borger, better known as Borgore, is a 25-year-old Israeli DJ and producer. Borgore has been in the dubstep game since 2009, and his early releases are known for their metal influences, sexuality, and misogynistic lyrics, which are presented with humor and scandal. Due to these influences and his stylistic approach, his early songs, such as “Nympho” and “Icecream,” proved to be radically distinct from the then-mainstream dubstep. Borgore proclaims that his sound occupies its own genre, hence early albums with titles such as “Gorestep” and “Borgore ruined Dubstep.” Since the explosion of dubstep, Borgore has dabbled in various sounds and genres, and artists that have associated with him are fellow DJs Datsik, Bassnectar, Doctor P, and Rusko, as well as Miley Cyrus for their track “Decisions,” which elicited media and Internet buzz for weeks. Borgore’s performance proved that he lies as an outsider in this intricate genre as his set varied from trap, dubstep, electronic rock, hip-hop, and electro, with his consistencies being his ability to throw crowd pleasers, drop fat beats, and work turntables.

Before the king of cake took the stage, the fans anxiously held up signs that read “bitches love cake” and even an Israeli flag. As soon as Borgore touched the turntables, his energy manifested as he bobbed his head and rallied up the crowd. He let us know who he was right away, opening with the unreleased (but already a crowd favorite) “That Lean” featuring DJ Carnage, as he blasted, “All these bitches love me ’cause I’m motherfuckin’ Borgore.” This created an insane torrent of liveliness and attitude like never seen before. He then transitioned his set with his Lana Del Rey “Summertime Sadness” remix. The entire crowd sang along as Borgore executed every drop with ease and without hesitation. He continued playing crowd favorites like French Montana’s “Marble floors” and Ace Hood’s “Bugatti,” which were mixed with unique and relentless drops, making it impossible for anyone at the plaza to take their attention off of the stage.

“He has so much energy on stage that it only makes you want to keep up,” said second-year global studies major Francisco Robledo.

Changing the mood, Borgore dropped Empire of the Sun’s hit “Alive” and RL Grime’s “Satisfaction” remix. His treble and bass heavy transitions were almost too much to handle and no one was able to stand still. Although a decently sized crowd stayed loyal to Borgore, others did not stay for the whole show. This may have been due to Borgore’s inconsistent set that jumped from genre to genre or simply to the call of the wild Isla Vista luring away those unfamiliar with Borgore or those tired of dubstep. However, the crowd that remained at Storke Plaza clearly wanted more.

“I did not want my night to end,” said first-year undeclared major April Delgado. “Borgore made my first weekend as a college student one that I will never forget.”

As the night continued, it seemed as if every attendee knew every word to every song as they tirelessly and relentlessly danced without shame. Borgore was also going berserk, bouncing and bobbing around, even grabbing the microphone and coming to the front of the stage to rap to his original tracks live. The song that garnered him fame as a humorous dubstep artist, “Nympho,” had the entire place rapping and moaning along. The blue-eyed heartbreaker had girls persistently yelling out his name, and his provocative sounds had students crowd surfing. His manic collection of club/trap beats and violent, rumbling bass drops were adorned with nonsensical lyrics, which manifested as a guilty pleasure for the students of UCSB. His genre-infused mixes made for a startling show. The only thing that was missing on stage was Miley Cyrus twerking and his ice cream truck.