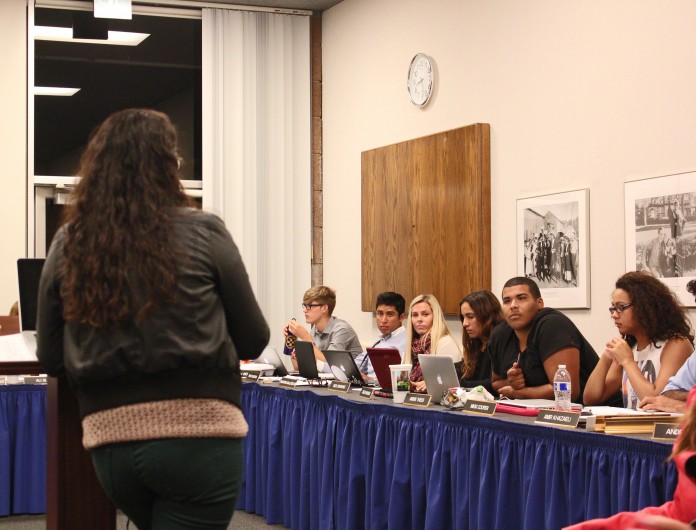 Associated Students Senate resumed its discussion of “A Resolution in Support of Undocumented Students and Immigrant Communities” on Wednesday, Oct. 9. This resolution, authored by Sens. Beatrice Contreras and Belen Verdugo, did not pass (12-9-2) as it failed to reach a two-thirds majority.

The resolution was officially sponsored by various groups on campus, including IDEAS and Student Commission On Racial Equality (SCORE). The main point of contention of this resolution was the “no confidence” clause found at end of the resolution, which said, “…ASUCSB Senate express [sic] no confidence in Ms. Janet Napolitano’s ability to actualize the mission of the University of California Office of the President’s Mission Statement until she meets the list of demands….”

The demands range from “holding mandatory annual trainings for UCPD on the rights of the undocumented students and other underrepresented groups” to upholding that the UC campuses remain a safe haven for “undocumented students and underrepresented groups.” While the demands could be contended, most students would not compromise on the “no confidence” clause.

“No confidence or nothing,” said On-Campus Sen. Nikki Calderon as she explained what was expressed to her at a University of California, Santa Barbara IDEAS meeting.

Napolitano is seen as a threat by the undocumented community and its allies because of her previous history as Secretary of Homeland Security and the many deportations that occurred during her term. Additionally, these students believe that it is the AS Senate’s responsibility to represent them and hear their concerns, as it would do for any other students.

As a result, the University Center’s Flying A room was full of organizations and students sympathetic to this resolution.

“I feel very uncomfortable,” said fourth-year Norma Orozco. “I feel very targeted whenever I’m in this room and it’s really sad, because this is supposed to be a body that represents me.”

Katlen Abu Ata, fourth-year student and Human Rights Board Events Coordinator, said to the Senate, “You said that you are here to represent the entire student body…I don’t want to repeat it, but there is very few to none—No, I didn’t hear very many people in opposition of this resolution.”

There was, in fact, little opposition to the resolution from the public present, except for one student whose conversation was cut off by Internal Vice President Kyley Scarlet, who deemed that the conversation was turning hostile.

However, there was some optimism about Napolitano.

“She can change,” said Off-Campus Sen. Jake Orens. “She has the power and she can very well be the next UC leader that will bring us to the next level.”

Once the votes had been cast, Scarlet announced that the resolution did not pass. Immediately after this, most of the students in the audience who were in favor of the resolution walked out, including Abu Ata and Orozco.

However, a few minutes later, Abu Ata came back to speak again during public forum regarding the decision and the immediate reaction to it.

“They clearly left,” said Abu Ata. “They don’t want to be a part of this group… The folks who wrote this resolution don’t want to be a part of it. They don’t accept what you’re trying to give them. They have worked on this campaign for so long. They created a list of demands; this is their voice and they are part of the most marginalized community.”

On the other hand, the remarks of the AS senators were mixed. Some expressed their concern for losing the faith of the undocumented community and its allies, while others believed that they made a well-informed decision.

“Whether this resolution passes or not, we are still going to continue organizing,” said Gloria Campos from IDEAS, prior to the announcement of the decision. “We are still going to be talking to all of our chancellors, all of our student organizations; we are still going to be organizing around these demands, but passing a vote of no confidence, it has so much weight, in terms of being in solidarity with other campuses, and being able to say UC Santa Barbara will have no confidence in you because of your history, and because right now that’s all we have to work with.”