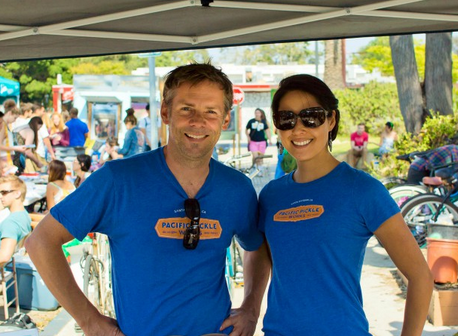 Food vendors, music, and University of California, Santa Barbara students took over the 65 block of Seville to celebrate the Isla Vista Food Co-op’s 40th anniversary. The event, entitled “The Greatest Story Ever Told: Celebrating 40 Years of the Isla Vista Food Co-op,” included live music, yoga, capoeira, and attracted UCSB organizations like the Environmental Affairs Board and the Food Bank. The event offered attendees entertainment as well as food and merchandise that promoted the Co-op’s ideals of serving natural and healthy products.

“We decided that it would be the perfect time to celebrate the Co-op,” said Co-op member and Co-op Board of Directors President Lisa Oglesby. “This past year we achieved the very major goal of taking over from being a renter of this building to getting a mortgage and buying the building, which is huge. So 40 years of being a co-op. Forty years, and we’re finally starting to own our building and moving towards the future, so this is all just a big celebration of that.”

The Co-op offered samples of some of their own food at the event, handing out information about the Co-op and the new food pyramid the Co-op Kitchen Manager Madia Jamgochian recently published.

“It was a great turnout,” said Jamgochian. “Lots of people, more than we expected. We just did a really fun smoothie demo and we’re excited about that. It’s all from the Co-op kitchen.”

With the Co-op recent purchase of the building they occupy, the Co-op plans to continue expanding and Jamgochian’s department is one of the first areas planned for growth.

Local food vendors offered up samples of bread, salsa, lavender lemonade, and other items, while crafting workshops taught people how to make seed bombs, crochet, and tie-dye t-shirts. Anne Altamirano, owner of Mesa Salsa Company, the new specialty salsa company based in Santa Barbara, offered samples of her company’s salsa to hungry IV residents and said her products were available through the Co-op.

“I love the Co-op,” said Altamirano. “It’s like my favorite store. My products are in the store. I love them. They’re all such a great community of people and I think this is fabulous. I wasn’t expecting this many people. This is amazing. I really love it.”

UCSB clubs and organizations also attended the block party, taking part in the event and informing attendees of their services. Chellsee Lee, the Clean Energy Chair of the UCSB Environmental Affairs Board, tabled in front of the Co-op and said she was enjoying the atmosphere the block party encouraged.

“It’s been super receptive,” said Lee. “It’s actually really cool because there aren’t a lot of times when Isla Vista comes together, and I think it [the block party] being so central to the actual community and then all the people in school, it’s really exciting to all come together. I’ve seen people I haven’t seen since freshman year and it’s really cool.”

Lee insisted that the event was not only for environmentalists or those who shop at the Co-op.

“Not everyone’s an environmentalist that comes to this block party,” said Lee. “It’s just to have fun.”

“I think it’s a really great event,” said Lankey, “to have all the community members as well as students out here. There are a lot of great committees, and a lot of great, small businesses out here, just kind of supporting what they do. It’s just a good way to bring the whole community together.”