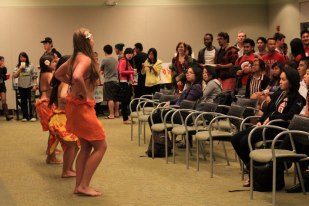 University of California, Santa Barbara’s own Thai Student Union and Khmer Student Association joined forces on the night of Thursday, April 25, to celebrate the Thai and Khmer New Year.

Hosted in the Loma Peloma Center, the celebration boasted food, song, dance, and games in honor of the New Year that the Thai and Cambodian cultures share thanks to efforts from a number of organizations on campus. Other campus organizations that contributed to the event included Iaorana Te Otea (a group celebrating the culture of the Polynesian Islands), Kapatirang Pilipino (Pilipino Student Union), Japanese Language Club, QAPI (Queer Asian and Pacific Islanders), PAC (Pacific Asian Coalition), and others.

It was the event’s first year, but both the Thai Student Union and the Khmer Student Association shared hopes that it would become an annual tradition and grow bigger in the future.

The Thai and Khmer New Year celebrations included vocal performance by Kapatirang Pilipino and dance performance from Iaorana Te Otea, food from a number of the organizations, and games to celebrate the New Year.

“We hope that people recognize that there actually is a Thai and Cambodian student population on campus…We wanted to show the diversity of campus and share some of the Thai and Cambodian culture beyond what students might normally think of,” said fourth-year Kathy Sihavanh, a sociology and Asian American studies double major and president of the Thai Student Union.

“We’re already so much bigger than last year,” said Napatr Pumhiran, a recently graduated art major. He added that the organization has plans to expand further next year and put on even larger events, including hosting a larger celebration for the Thai and Khmer New Year.

Sihavanh was pleased with the turn out and success of the event.

“We want to thank everyone who came and enjoyed the event and all the organizations that participated,” said Sihavanh. The event drew students from all parts of the UCSB community to enjoy the traditions from a variety of the cultures on campus and celebrate the Thai and Khmer New Year.

Khmer Student Association will be having further events to celebrate Cambodian culture on campus, including an event on May 11 which will feature traditional Cambodian performance and free food. Thai Student Union will also be supporting this event and both organizations have plans to put on more events to bring awareness of the Thai and Cambodian cultures to campus in the future. Both groups have a Facebook page listing details of their meeting times and events. Thai Student Union can be found at https://www.facebook.com/sbtsu?fref=ts and Khmer Student Association at https://www.facebook.com/khmer.studentassociation?fref=ts.