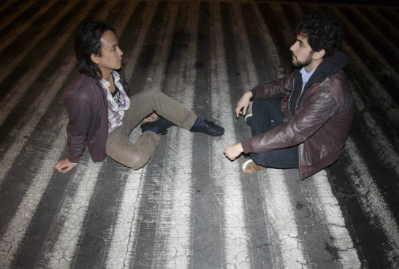 A modest yet attentive crowd gathered on May 16 at Karl Geiringer Hall to hear Ramon Fermin and David Gonzales, also known as the Ignition Duo. The performance demonstrated the versatility of the guitar, as both musicians showed off a range of musical sounds and styles that varied from classical to modern.

The Ignition Duo formed in 2011 with the mission of exploring the genres of “new music” and progressive rock. They split their performance into two well-defined halves, starting out with 20th century classical guitar duets and then shifting to contemporary rock pieces that came off as fascinating and often intentionally abrasive. Although these two styles are at the opposite end of the modern musical spectrum, they also held unexpected common ground. Pieces from both halves of the program shared a world music influence, and much of the music was interactive in its call-and-response between the two instruments.

Fermin and Gonzales began with “No Feathers On This Frog,” a minor key piece by Serbian-born American composer Dusan Bogdanovic. The work commenced slowly and developed into a main theme that appeared first through harmonization, and then again as the two guitars traded off with the melody. After a dramatic finish, they moved into the Brazilian “Jobiniana no. 1” by Sergio Assad. This mellow piece contrasted with its faster predecessor, yet fell into the same vein of responsive guitar parts and a constantly moving, flowing sound.

“Impulses” gave a hint at what was to come after intermission, and started with sharp, dissonant chords from both instruments. The edgier piece stayed true to the classical theme of the first half, though, and mixed harsh sounds that seemingly came out of nowhere with quiet, modulating harmonies.

In their last number before intermission, the duo played a three-movement piece called “Tango Suite” by Astor Piazzolla, an Argentine composer. The dance influences permeated all sections, and made for an interesting sound when combined with the composer’s modern take that shook up the traditional tango rhythm.

The duo incorporated electric guitars in the second half, which began with a twist when Fermin took the stage for a solo of Clarence Barlow’s “…Until…”. The unexpected and exclusive use of harmonics in the piece resulted in a metallic sound quality that one wouldn’t typically associate with the guitar. While the piece did have a decipherable melody, a lack of fixed rhythm made its tones seem more like separate intervals and gave it an overall feel of disconnect.

Next was a guitar adaptation of Steve Reich’s “Nagoya Marimbas,” which was commissioned for the music conservatory in the city of Nagoya, Japan. The piece was quick and lively, and compared to the one prior, far more melodic.

The finale was perhaps the most experimental out of all the selections. “Double Negative,” which was featured at the 2013 Switchboard Festival in San Francisco, jumped off with extremely discordant notes that recurred in the majority of the piece. A handful of sweeter-sounding tunes accompanied it, yet the emphasis seemed to be more on the difference between notes than their similarities.

Like other bands in the genre, the Ignition Duo’s focus on experimental music utilized instruments in unusual ways that expanded on their capabilities. The contrast between the two halves was especially important to the performance, and showed how guitars can move beyond classic sounds into areas that are notably innovative.