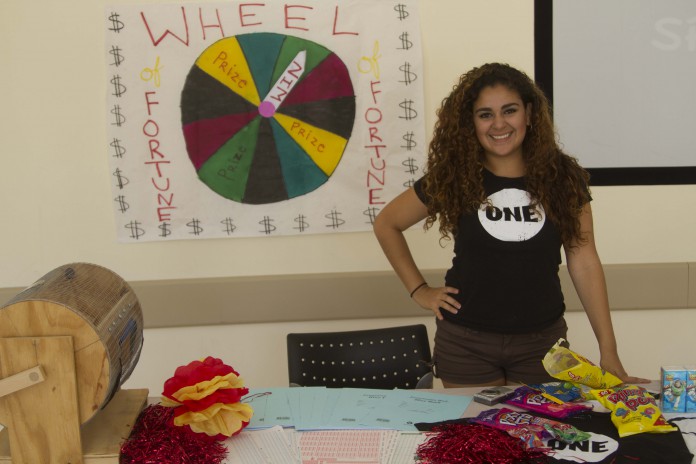 University of California, Santa Barbara’s chapter of the ONE campaign hosted an informational “carnival” event Monday, May 15, hoping to stress to students the importance of poverty prevention and disease control on a global level.

“While ONE is a worldwide organization, it was only until a few years ago that students were challenged to make a chapter on the UCSB campus,” said Janet Kim, treasurer of the ONE campaign at UCSB.

Started by rock band U2’s lead singer, Bono, in 2004, the ONE campaign has generated worldwide success, accumulating over 3 million members globally. At the event last Monday, ONE presented its campaign and goals to the UCSB student population. Located in the Student Resource Building’s Multi-Purpose Room, the carnival-style event provided an atmosphere for students to grab a bite to eat and learn about the global fight against poverty. The carnival featured a henna table and a popcorn machine in addition to games and activities aiming to teach students about poverty prevention. Students won prizes for guessing poverty-related statistics from around the world.

Often the answers were surprising and clearly went to illustrate the main points that the ONE campaign hoped to drive home in the course of their brief public event appearance at UCSB. As a charity, ONE tries to differentiate itself from other charities in a number of ways. Instead of asking people for charitable donations or trying to persuade them to donate money directly, ONE tries to pressure political leaders for money in order to help support efforts to eradicate poverty in countries such as Uganda and Ethiopia.

That isn’t to say that ONE doesn’t raise money for charity in other ways. On display at the carnival was one such endeavor: bracelets made from recycled paper that had been crafted by Ugandan women.

This was not the first time that UCSB’s ONE campaign has tried to raise awareness of issues relating to poverty. Previous events have included hunger banquets in which individual participants are given food to eat based on the rations of a particular country. Depending which country a student receives, he or she is given a certain amount of food accordingly.

Ileana Armendariz, the campus leader of the UCSB chapter for ONE, explains how she tries to emphasize that awareness and political pressure are what stand at the core of ONE.

“We don’t want your money,” said Armendariz, “we want your voice.”