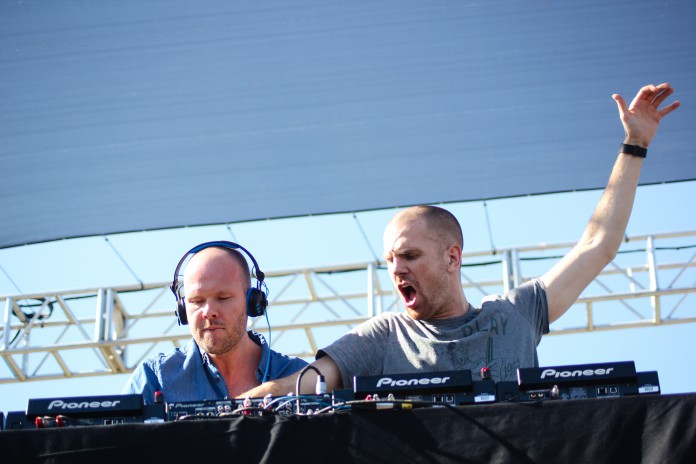 This year’s highly anticipated Extravaganza festival promised and delivered students at the University of California, Santa Barbara an unforgettable concert experience on May 19. The treasure hunt-themed festival took place at UCSB’s Harder Stadium.

Clear skies and warm weather set the ambience for the day, which kicked off around 1 p.m. with Alpha Phunk, the winner of UCSB’s Battle of the Bands competition. Sofia Melo (vocals), Larcy Hall (MC), Vincent Loris (drums), Bobby Beresford (trumpet), Blake Bennett (guitar), Miller Wrenn (bass), and Ben Pearse (keys) boast a musical maturity that contrasts with their length of time together as a group. The band had only played together for a few months before competing in Battle of the Bands and landing the opening spot. Their unique mixture of funk, jazz, and rap started the afternoon off on a flavorful note.

“I didn’t know them [Alpha Phunk] before today, and I liked them. They were good as an opening act,” said Craig Martow, a psychology major and attendee. The large stage failed to intimidate the band, who showed off their instrumental arsenal with songs including the crowd-pleasing “Blue Phunk.”

The high-energy and spirit of the band’s show transcended their performance; the band members interacted colloquially with each other backstage and seemed more like a family than just a group of musicians.

“It was really amazing being up there after going to these shows in the past,” said Hall. Loris added, “I don’t think anyone was nervous. We play together so much that it comes natural to us.”

Orange County’s The Growlers carried on the funky vibes with their psychedelic California-style rock, a genre they like to call “Beach Goth.”

“We don’t have a plan going into the studio,” said Brooks Nielsen, the band’s frontman. “Everyone in the band writes, one person listening to reggae and the other to country music, so that has a big influences on our sound. We don’t know what we’re doing before going in the studio; we write as much as we can and put the finishing touches on it.” Based on how many students sang along with Nielson’s resounding lyrics, the band appeared to be well-received by the audience.

“I love The Growlers,” said third-year student Andrew McLean. “They are my favorite band in the world. They were an excellent choice for Extravaganza and I am happy that they made it.”

J Boog and the Heavy Rain band followed suit with heavy-hitting reggae beats infused with island spirit. Their moving music fit the sunny day, and the crowd embraced their jams with open arms. J Boog got students dancing, clapping and repeating his rhymes with talent resounding the spirit of reggae’s best and brightest. They ended their set on a high note when they returned to the stage to perform Bob Marley’s famous “Jammin.” For those who waited around afterward, J Boog hung out in the crowd after the show.

“My cousins go here, so we went to say hi,” J Boog said. “I went to go see them and everyone came by and asked for pictures.” When asked about the UCSB crowd, J Boog replied enthusiastically. “It was lovely, man! Santa Barbara is a great place to perform; it’s sunny right now, and it’s a great day to perform,” he said. “Students come out here and rage; they party, and they showed us much love.”

In a message to aspiring musicians out there, J Boog noted that making music is somewhat like doing homework.

By the time Dada Life (comprised of Olle Corneer and Stefan Engblom) came on stage, students were ready to go bananas—and that is exactly what the Swedish DJs did. Their famous electro house music epitomized the notorious IV lifestyle, and prompted plenty of fist pumping and jumping for the duration of their set. A notable element of their show was their hit “Kick Out The Epic MotherF**ker.” They used the intro part of the song to both start and end their dynamic set. In true Dada fashion, they also threw bananas into the eager crowd throughout the set, and paid tribute to their penchant for the yellow fruit through a remix of Gwen Stefani’s 2004 song “Hollaback Girl.”

Kendrick Lamar closed the set under the setting sun, mixing together songs from his older mixtapes and his record-selling album “good kid, m.A.A.d city.” It was not difficult to find fans of the Compton native in the audience, as many students in attendance shamelessly recited his sometimes questionable lyrics. Lamar made sure to include his lead singles “Swimming Pools” and “Poetic Justice,” providing both die-hard fans and new converts opportunities to sing along.

“A lot of my friends came here for Dada Life, but I am a big Kendrick Lamar fan,”said Jackie Lee, a third-year mathematics major.

Overall, this year’s lineup succeeded in appealing to the different musical tastes of the UCSB community, which is what AS Program Board strives to achieve every year. The ultimate result of the ASPB’s time and effort proved that #X13 truly marked the spot.