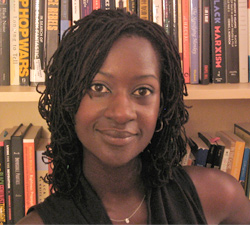 Anti-Racism Inc. is a year-long program that seeks to explore the meanings and language of antiracism. On Saturday, May 11, it did so through the lens of poetry.

Anti-Racism Inc. is the work of the American Cultures and Global Contexts Center, which is part of the University of California Santa Barbara’s English department. According to the website, it “seeks to broaden the cultural study of the United States” and offer work in interdisciplinary studies. Anti-Racism Inc., which is their latest effort, seeks to “consider the need to rethink the meaning of antiracism in light of contemporary shifts in global political discourses on race and racism.”

Poetic Interventions, a day-long poetry workshop and performance, brought together an intersection of community, staff, and students, as well as a variety of invited poets and spoken word artists from various backgrounds, many of whom are New York and Bay Area based.

The workshop began with an introduction by Professor Felice Blake of the English department, who worked to organize the event with graduate fellow of the program, Alison Reed. “I’m just so happy to be here today with everyone,” said Blake. In explaining the purpose of the workshop, Blake said, “We wanted to think about the language surrounding anti-racism. We wanted to think about how it’s been stolen and how we can create new ways to talk about these issues. We’ve been exploring this all year as part of Anti-Racism Inc.” She also addressed the power of poetry being what brings “our best intellectual capabilities to our best creative sensibilities.”

The workshop was structured around activities lead by some of the invited poets. It began with a meditation lead by Gregory Mitchell, a spoken word artist from the Bay Area who works with youth in prisons, detention centers, and continuation schools. The workshop also included a recitation of his work by Dubian Campbell, another spoken word artist and student at Ithaca College in Rochester, New York.

Campbell then invited the group to tell their stories about how they got where they are today in the tradition of African storytelling, with each member of the workshop reading out a single line from what they wrote to the beat of an improvised drum, a table pulled the front of the room.

The second workshop was led by spoken word artist Colin Masashi Ehara, who detailed the work of a scholar whose study had found that black victims of violent crime were perceived by their attackers as somehow “culturally dysfunctional,” and that the likelihood of being a victim of violent crime increased as perceived levels of cultural dysfunction did. He added that violence against Asian Americans fell on another false binary: American vs. foreign, where victims were more likely to be attacked if they were perceived as foreign. The group was asked to reflect on where they felt others perceived them on the resulting graph (with culturally functional/dysfunction on the horizontal axis and American/foreign on the vertical) as to compared to how they perceived themselves.

The final workshop was led by poet Daniel “Fritz” Silber-Baker, whose interest was specifically in directly addressing the realm of language and the connotations of language. He asked members of the workshop to create a word for the relationships and human interactions that there weren’t simple names for. They also discussed, in Baker’s words, “language that has been given to us,” “language that has been taken from us,” and “language we have created” in the struggle against racism and racist speech and thought.

Immediately following the workshop, the group moved into the MCC Theater to perform a mix of pieces created in the workshop and prior works. Several students read their own pieces or works that had resonated with them that related to the issues of the day, along with the visiting poets from the workshop, community members, and staff.

The space welcomed contributions from whoever was interested in speaking for as many pieces as they’d like to read, including one of the members of the film crew that was recording the workshop. Fourth-year English major Marlene Moreno shared that she was “coming away from the space with a renewed energy to write.” Gregory Mitchell said that his takeaway was that, “you can find or create these people and these spaces anywhere, to talk about these issues and to do these things.”