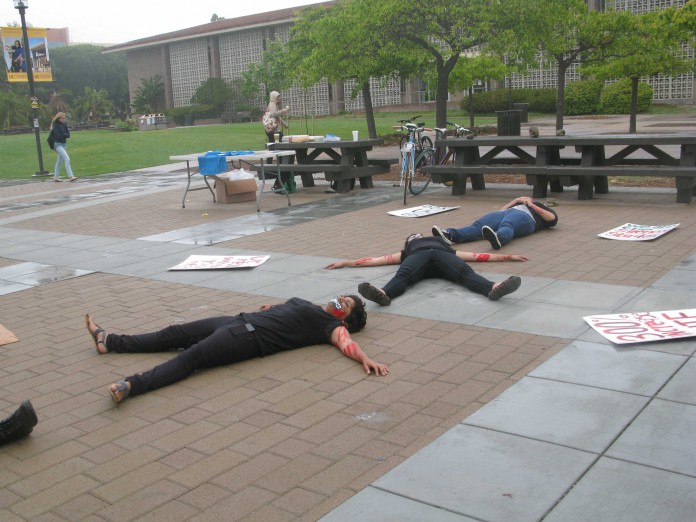 Several students wearing black tape across their mouths, and with phrases like “Where’s our voice?” and “No Representation” painted on their arms, lay in the Arbor on April 24 in a silent protest and message to the UC Regents.

The Associated Students Office of the President organized the demonstration after the UC Regents failed to reply to a letter sent out on April 19 by current AS President Sophia Armen. The letter invited the Regents to hold a meeting of the Board of Regents at UCSB.

“This was a silent protest to symbolize the silencing of students that has been occurring historically, by the UC Regents, specifically, with their offensive disregard and lack of response to an invitation to come to our campus to hold their meeting,” Armen said. “So we’re out here as part of an escalation—we’re trying to get our campus very aware of how fundamentally students are pushed out of the decision-making process and how that actually affects our daily life at UCSB.”

The location for most of this year’s board meetings is currently the University of California, San Francisco, a graduate-only campus, which Armen argues is an inaccessible location for the majority of UC students to attend and have their voices heard by the Regents.

Third-year political science major Reyna Kauil was also at the event, collecting signatures for a petition to bring the Regents to UCSB and to show the Regents exactly how many students are in support of the demands set forth by Armen.

“Our demands being met would allow more students to express their concerns and talk to the Regents,” Kauil said. “We’re collecting signatures to show the Regents that students care and that we want them to come to UCSB.”

The action in the Arbor received a lot of attention from students walking by who stopped and looked at the protesters, who were lying on the ground covered in paint, to see what was written on their arms and signs.

“We were covered in red paint, symbolizing blood, because we are literally watching the death of very important ideals, which are supposed to be what that the university abides by and upholds—things like shared governance and accessibility,” Armen said. “These are the things we are fighting for.”

Students will now continue to demand that the Regents come to UCSB for their meeting until they are given a reply.