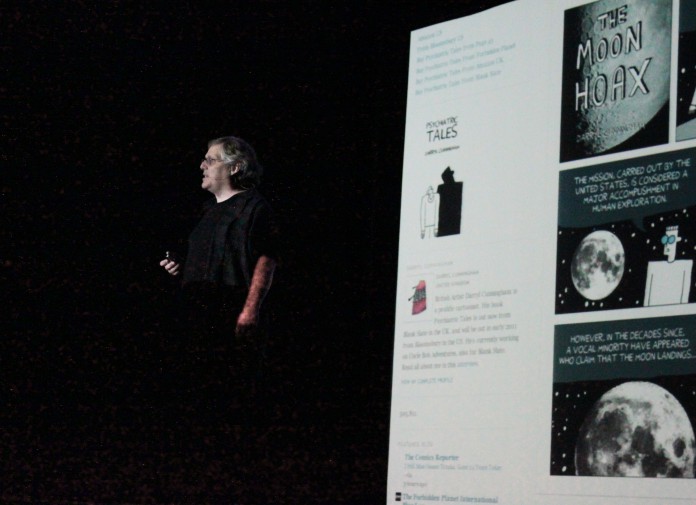 Can the medium of comics be extended beyond the realm of our Sunday morning paper cartoons or traditional comic books into ancient Egyptian art, photography, video art, sculptures, and even Powerpoint presentations?

Speaking before a packed Campbell Hall at the University of California, Santa Barbara last Wednesday night, April 10, McCloud, in his free Regents’ Lecture, looked through the intricate medium of comics as a lens for exploring the larger world of visual communication, which he views as a two-way collaboration between artist and viewer rather than a constant stream of information that is channeled in a singular direction.

His visit to UCSB also involved a coffee session at the Transcriptions Center in South Hall on Thursday, April 11, and coincided with UCSB’s April Fools comics competition event Cornucopia on Friday, at which he was present as a special guest.

“Cartoonists are often trying to find the best way to combine words and pictures,” McCloud said. “But in reality, all pictures are words, and comics are a great way of showing an upstream pattern in the conveyance of information. They are a firsthand way of expressing opinions about the world. When you are able to pack things down into a few simple lines, you can convey a whole lot more information.”

McCloud’s ethos on the art of communicating information was reflected in the very form of his one-hour long presentation at Campbell Hall. Rather than displaying slides loaded with confusing bullet points and endless lists, the likes of which would cause information display expert Edward Tufte to “kill a kitten every time you make a Powerpoint,” his speech was perfectly synchronized with carefully selected images that conveyed many of his insights on the power of visuals to make a point, and laced with his unique brand of dry, witty humor.

The potential of comics is very large but yet untapped, McCloud observes.

“Comic strips take advantage of the way the brain processes things,” he said, “and has evolved into other forms which can be used by businesses for promotional material such as longer graphic novels, et cetera.”

However, in an age where the medium of comic strips intersects with the development of new technologies such as mobile and tablet devices, McCloud identifies the current pervasive method of “taking the shape of a previous technology and inputting it into new technology” as problematic—such as when comic strips from books are awkwardly modified for tablet devices, making it a difficult experience for the user when he has to flip from one page to another electronically, interrupting the concept of a “single unbroken reading line” that McCloud points out has been a design concept since the age of ancient Egypt, when Egyptian art was inscribed on walls in a way that suited the viewer experience.

Form can complement content, and McCloud proposes thinking of the new digital screen as a window rather than a mere page, through which new meaning can be made.

“Circular narratives can be literally circular,” McCloud said, “and stories can literally take a turn as they move about vertically (Y axis) or horizontally (X axis).”

There is even the concept of the Z axis, in which a screen can allow a viewer to progress further into the narrative simply through a change of perspective which makes it appear as if the user is being propelled into greater depths in a comic strip.

Employing the metaphor of a baby kangaroo sitting in a mother kangaroo’s pouch, McCloud notes that our current situation is still one in which “new technologies are living in the pouch of old technology.”

McCloud’s main message it seems, is one of adaptability in an age when the ground is constantly shifting under us. “Comics are evolving very fast, and one needs to be aware of the basic structure and character of comics in order to be able to establish which way is up.”

“It is our birthright as human beings to escape into new worlds from time to time. But this also allows us to look at our own world with different eyes. To understand the shape of the world, we need to see it from different windows and angles—and the art forms that we employ need to suit these windows through which we see the world,” concluded McCloud.