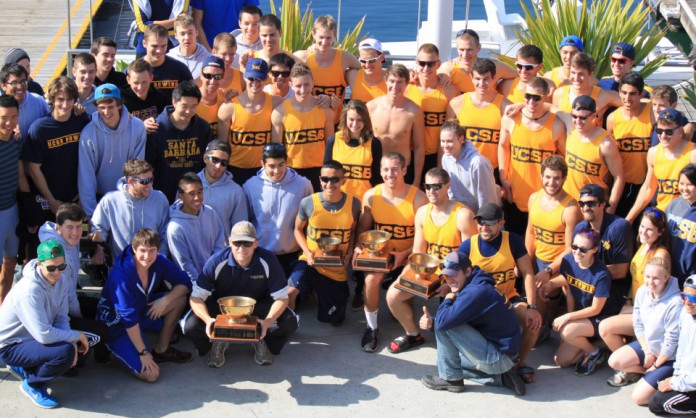 On a Friday morning, I had the pleasure of meeting with members of University of California, Santa Barbara’s rowing team. I, a naive freshman, did not even know much about their team’s existence before this meeting. While talking with Demetrio Ramirez, a fourth-year sociology major; Lucas Wilhelm, a fourth-year linguistics major; Max Mercado, a second-year electrical engineer major; and Andy Verdegaal, a fourth-year biology major, I learned that they are an expanding program hoping to grow as a team in the future, both in numbers and in success.

Clad in their rowing outfits, they had just come straight from practice. Each of them more muscular than the next, they spoke of their love of both the team and the sport. All joined the novice team as freshman, never having rowed crew in high school. They were looking to try something new. The passion in their eyes was very apparent. Verdegaal’s enthusiasm shined through as he said, “People want to move on from the novice team to the varsity team. We want to get faster and stronger.”

When the three seniors joined the team three years ago, there were only six members on the rowing team. Now, there are over 70 members of the men’s team. Since Desmond Stall, the head coach, arrived at UCSB four years ago, the team has increased recruiting on campus and in Isla Vista. By being persistent in their recruiting process, the team is able to attract those who might not have known about the team. Then, Wilhem said, jokingly, “They get you hooked.”

The UCSB rowing team, founded by students in 1964, is a premier club program. They are currently ranked fourth in the nation. As a UCSB club sport, they compete against both club and varsity teams from around the United States. The team competes in some of the most prestigious competitions in the sport, such as the Head of the Charles, the biggest rowing event in the world, which takes place in Boston in the fall. They also compete in the San Diego Crew Classic in the spring, which is the biggest regatta on the West coast.

This year the men’s 8 regatta won the San Diego Crew Classic. Each member I interviewed definitely said that this was the highlight of their season thus far. This was only the 2nd time in UCSB history that the team has gotten first place. The coaches from the 1991 team, the last time UCSB won this race, watched the race, too, as they’ve done for the past 22 years. When speaking of meeting the coaches, the boys all agreed that meeting with these coaches afterward filled them with great pride to be a Gaucho. Ramirez said, “the eight of us stuck around and we’ve seen ourselves progress. If you stick around for four years, you’ll win. We did a lot of losing, and beat ourselves up. But in in end, it paid off.”

The program is split between training on water as well as off-water training. On-water training facilities are 30 minutes away at Lake Cachuma. In the beginning of the school year, the team focuses on technique. Then, during the winter they have to translate that technique to boat speed. During the actual season, however, they practice much more; twice a day, six times a week in the winter, both on land and in the water. On the weekends during the spring, there’s no resting as they try to get a race almost every weekend.

“You see a huge drop off from novice to varsity. These are the people who want to be there. You miss one person from your boat, you can’t row,” said Mercado.

Ultimately though, the goal of the team is for each member to be a student athlete. They are students first and athletes second. These men work hard in the classroom and dually as hard with their rowing.