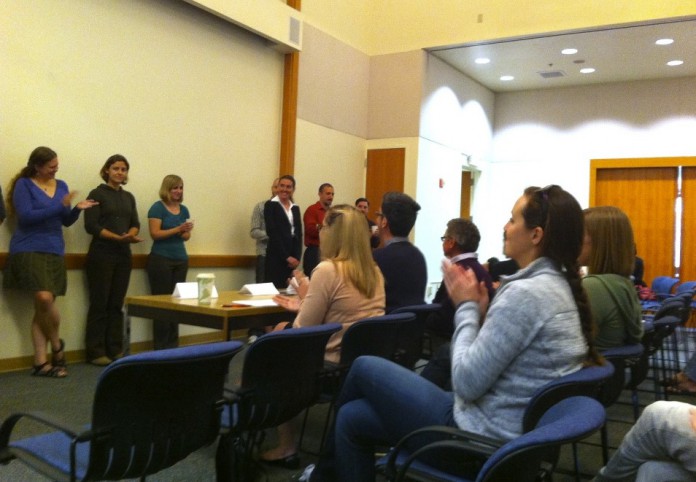 On Friday, April 19, a packed audience of UCSB faculty, staff, as well as both undergraduate and graduate students, attended the final round of the Grad Slam. The Grad Slam, a part of the UCSB Graduate Student Showcase, is a competition for graduate students of any discipline to present their research in a three minute talk supplemented with up to three slides. Nine preliminary rounds were held over the course of a week, from April 12 to the 18, and out of each round the best presentation was chosen for the finals. The top prize, which was a research fund of $2,500, was won by Peter Mage, a graduate student studying Material Science and Engineering. The two runners up were Misty Riddle, who is studying Molecular, Cellular, and Developmental Biology, and Britney Pennington, who is studying Bimolecular Science and Engineering. Each received a $1,000 research fund.

The Grad Slam showcased a wide variety of topics given by impassioned graduate students discussing their work.

“I thought the Grad Slam was a great success!” said Britney Pennington, who gave a presentation called “Directly Reprogramming Human Cells to Treat Ocular Diseases.” “I really enjoyed going to the other rounds and getting quick glimpses into such vast array of research fields. Three minutes per project was great.”

The three-minute rule forced the speakers toward a succinctness that the audience seemed to really respond to. Very difficult topics and areas of research had to be boiled down into their most essential aspects so that they could be better understood by judges and an audience of different intellectual disciplines than of those presenting.

“Presenting was fun,” Pennington went on to say. “I enjoyed teaching people about the ‘big picture’ of my project.”

Peter Mage shared Pennington’s sentiments, saying, “It was actually a lot of fun! I enjoyed the opportunity to share my work with people who wouldn’t usually get to hear it. That made it more challenging in some ways, but ultimately more exciting. It was also great to get to do this with some other really sharp grad students from all across campus.” Mage’s speech was about the use of accurate sensors to understand drugs effect on individual bodies and take the guesswork out of medicine.

When asked how winning the Grad Slam would affect his research, Mage said, “Winning the Grad Slam gives me some extra financial flexibility to get equipment for my project, as well as to travel to conferences to share my research with other scientists. It was also a great opportunity to get other people on campus excited about what my lab is doing, which can always lead to good things [collaborations, etc.] down the road.”

The Grad Slam fostered a good deal of interdisciplinary respect and interest in both the audience and the presenters.

“Peter and Britney’s talks were both excellent,” Misty Riddle said. “I think the judges did a great job.”

Riddle also praised the Grad Slam as a whole, saying, “I think the organizers did an excellent job. It was interesting to hear from other grad students in very different departments.”

Her speech was entitled “Reprogramming Cell Fate and Remodeling Organs in a Tiny Worm,” and focused on her research in changing the organs of tiny worms and the possible positives that could be gained for humanity through cell remodeling.

One member of the audience, Erik Spickard, a first-year graduate student in the Molecular Cellular and Developmental Biology department, said of the presentations, “It was nice to see both the big impact factor and also specifically what they’re doing.” Spickard felt that the ability to present that the Grad Slam allows for was a really good thing, saying, ”It’s a really good skill for scientists to have and something that’s stressed. I think it’s good that more people are working on that, being able to appeal to everyone and explain exactly what you’re doing.”

Overall the Grad Slam seemed to be a real success. As Mage enthusiastically said, “The Graduate Division, especially Whitney Winn, who coordinated everything, did an awesome job making the Grad Slam happen, and I hope to see it happen again next year!”