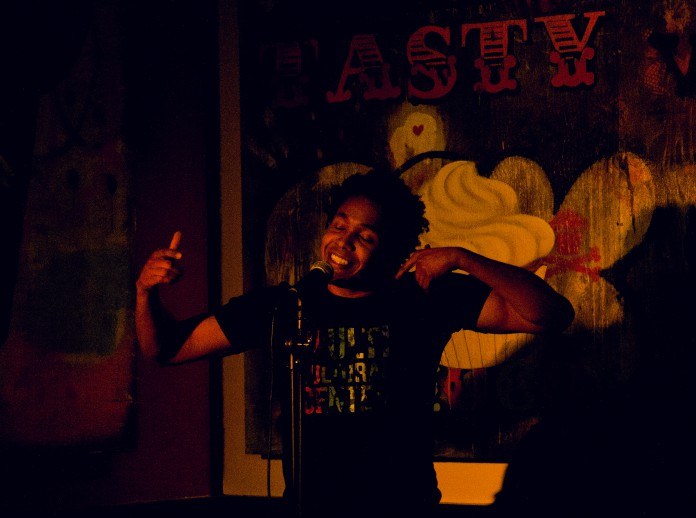 An open mic was hosted by the University of California, Santa Barbara’s MultiCultural Center on Thursday, Feb. 21, at the local cafe Crushcakes. Against a backdrop mural of cupcake paintings and the words “sugar and vanilla sweet,” a collage of both students and Isla Vista locals of different ages, ethnicities, and backgrounds came out to express themselves. Some slammed more classical style spoken word, others incorporated less traditional methods like singing, one individual free-styled, and another didn’t say a single word, and instead chose to express himself through dance. All in all it was a very eclectic event.

Zaveeni Khan-Marcus, director of the MCC, believed the night to be an overall succcess.

“The MCC was established as a safe space for marginalized communities. Spoken word is a powerful medium to give voice to those in the margins, the invisible, a means for people to share their stories,” said Khan-Marcus when asked what the impetus was for the MCC to host open mic, spoken word style events.“The MCC wants to create a space for validation, giving a voice to the people.”

“It was magnificent and significant, I’m really sure a lot of people got something out of it, it was such a fluid combination of raw emotion and creativity,” said Lizama. “I’m really attracted to listening to other people express themselves in ways that are taboo or unordinary. It takes a lot to stand in front of the crowd and people have got a lot to say.”

Another performer, Vanessa Renee, a second-year feminist studies major at UCSB, stated, “the MCC is great, what they stand for, and hosting an open mic talking about those things.”

Her piece was a reaction to Jay-Z’s announcement that after the birth of his daughter he will now longer use the word “bitch” in his lyrics. Another poet focused on the portrayal and marginalization of Asian masculinity and identity in American culture. Many individuals, in a similar vein, discussed issues they saw in the society around them, and how these social ills had effected their lives. Other poets focused on more personal issues of alienation and internal strife. Many of the performers and audience members expressed being powerfully affected by a particular poem about a young women dealing with her father’s alcoholism.

“It was powerful seeing all the poets open themselves up, you know, show themselves in their true flesh. I really appreciated that,” said audience member and UCSB alum Leo Ayala. He felt very strongly that spoken word was a beneficial method of expression and a way of connecting people and communities.

“It’s an art, it’s ability to open up the mind, using some rhythm, to share insight on your personal narrative,” said Ayala. “It’s a way for other person to gain the experience of another.” That’s really what the MCC open mic at Crushcakes was all about: people sharing themselves, their passions, their faults.