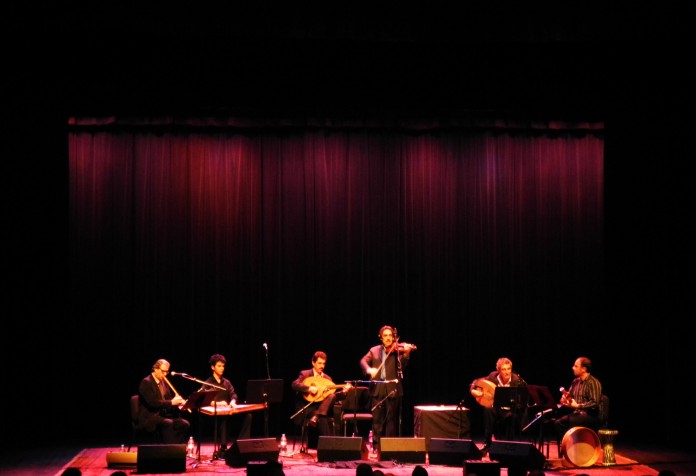 It was a stunning performance that brought the cheering audience to their feet at the end of it all.

Illustrious Arab musician Simon Shaheen and members of his quintet graced Santa Barbara with their presence on Feb. 6, performing a selection of musical pieces that deftly fused the sounds of traditional Arab music with contemporary elements at University of California, Santa Barbara’s Campbell Hall.

The Simon Shaheen Quintet features Simon on the violin and ‘oud (a pear-shaped, guitar-like string instrument), Bassam Saba on the flute and nay (an end-blown flute originating from Iran), Najib Shaheen on the ‘oud, Dafer Tawil in charge of percussion, and Ali Amr, who provided vocals and played the qanun (a string instrument similar to the zither). William Shaheen, who plays the violin and ‘oud, also made a special appearance.

Throughout the eight songs that were presented, Shaheen’s vision for “the unbridled fusion of Arab, jazz, Western classical and Latin American music [as a] perfect alchemy for music to transcend the boundaries of genre and geography” was strongly executed.

The genial Shaheen interacted with the crowd in between pieces, explaining how the traditional Western violin can be tuned down a few notches to complement the rhythms of Middle Eastern sounds. Indeed, the soaring notes of his polished violin melded seamlessly with the haunting rhythms of traditional Arab music, adding a daring spin to the overall musical quality.

Originally from Palestine, Simon Shaheen is a professor of music at the Berklee College of Music and New England Conservatory in Boston and has been awarded for his contributions in advancing the legacy of Arabic music to new frontiers with the National Heritage Award in 1994.

Notable audience favorites that night included “Dance Mediterranea,” a song with a number of rhythmic changes that allows an extensive metric improvisation on the violin, venturing into new territories of musical expression despite being firmly rooted in Arabic tradition. Dance composition “Dance, Raqsit Badi’ah” was also another strong, energetic piece with Ali Mar’s nimble handling of the qanun drawing applause from the audience.

Other unique pieces by famous composers and from popular Egyptian films were also performed, such as “In-Nil Nagashi,” which comprised of a monologue performed vocally by Muhammad Abdel Wahhab in the 1934 film “Al Wardah Al Baydah,” or “The White Rose.”

“Ishitqto Ruhak” was another song that featured vocal forms, based on a popular Arabic poem and allowing room for improvised passages at moments where call and response actions are made between the soloist as well as the chorus.

In his short audience dialogues in between performances, Simon Shaheen remarked that he was pleased at the strong interest in Middle Eastern music shown in Santa Barbara.

“When I first arrived I visited the Middle Eastern ensemble, expecting just about maybe 20 people, but I was really surprised when it turned out to be about 80!” he said.

Second-year global studies major Kiyomi de Zoysa remarked, “It was as if I was taken on an adventure in my mind; during the show I simply closed my eyes and savoured the music which was so colorful, and I felt that all the aspects of the music came together really well.”